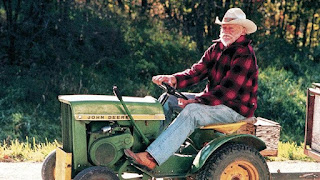 Directed by David Lynch and written by Mary Sweeney and John E. Roach, The Straight Story is a simple story about an elderly man who heard about his estranged brother’s stroke as he decides to visit him by driving 240 miles by using a John Deere lawnmower. The film is a change of pace from Lynch who strays from his world of surrealism in favor of something low-key but engrossing as it is based on a true story about an event that happened in 1994. Starring Richard Farnsworth, Sissy Spacek, and Harry Dean Stanton. The Straight Story is an exhilarating yet touching film from David Lynch.

The film is a simple story in which an old man drives a lawnmower, with a homemade trailer towed behind the mower, just to see his ailing brother whom he hadn’t seen or spoken to in a decade. Yet, it is a story of not just about forgiveness but also perseverance in which a man wants to do what he feels is right by not just seeing his brother but also to make amends for whatever bad things they said to another that split them apart. Though Alvin Straight (Richard Farnsworth) could’ve asked someone to drive him from Laurens, Iowa to Mount Zion, Wisconsin. It’s a journey that Alvin needed to make on his own while his stammering yet sort of mentally-disabled daughter Rose (Sissy Spacek) stays home as she couldn’t drive her father as well. With bad eyesight, walking on two canes, and is very stubborn, Alvin will do whatever it takes to see his brother Lyle (Harry Dean Stanton).

The film’s screenplay by Mary Sweeney and John E. Roach does play to a traditional structure though it’s told in a very loose form. The first act is about Alvin preparing for his journey where he would use his old lawnmower which doesn’t last as he would get a new one to use for the journey from Iowa to Wisconsin. It’s in the second act where the story really takes shape as Alvin would drive his mower and trailer in the day at a very slow speed and stop at night. Along the way, he would encounter many people including a young hitchhiker, cyclists, and other sorts of people in small towns. Many of which display the sense of decency and generosity that is often encountered in small towns. Especially where Alvin would talk to people about the things he experienced as well as his daughter Rose and brother Lyle where he doesn’t talk much about the latter until later in the film. It is Lyle where it adds weight to the journey that Alvin is taking and the reason into why he needs to see him.

David Lynch’s direction maintains that air of simplicity in terms of compositions as well as shooting the film on location from Laurens, Iowa to Mount Zion, Wisconsin as it was shot largely on chronological order which rarely happens in film. Yet, it does play into Alvin’s determination to reach his destination no matter how long he takes as well as having to endure big trucks and such. Lynch’s usage of close-ups and medium shots help play into not just Alvin’s struggle to get to where he needed to go but also his age as he’s walking with two canes and knows he’s getting older. Lynch would also go for close-ups and shots that play into the feel of the road as if the audience is a passenger in Alvin’s journey.

There are also wide shots of the many locations that is used in the film as it plays into a sense of Americana that is rarely seen in films as it plays into a world where there is still a sense of good and generosity that people need in a world that is often troubled. Though it’s climax is inevitable, it does have something that is still powerful not just about a man’s journey but also a man just wanting to see his brother. Overall, Lynch creates a very evocative yet touching film about a man driving more than 200 miles on a lawnmower to see his ailing brother.

Cinematographer Freddie Francis does amazing work with the film‘s cinematography to capture the beauty of the American Midwest in its daytime settings while going for something more natural and low-key for scenes set at night including the campfires that Alvin would make. Editor Mary Sweeney does excellent work in the editing as it is straightforward with its rhythmic cuts with a few stylish usage of dissolves and fade-to-black cuts. Production designer Jack Fisk and set decorator Barbara Haberecht do fantastic work with not just the look of the home that Alvin and Rose live in but also the small trailer that Alvin would live in during his journey.

Costume designer Patricia Norris does nice work with the costumes as it‘s mostly casual for what Alvin and Rose wear. Sound editor Ronald Eng and sound designer David Lynch do superb work with the sound in not just creating naturalistic sound for everything that happens on location but also in some of the layering of sound to play into some of the surroundings including a scene where Alvin talks to another elderly man about World War II. The film’s music by Angelo Badalamenti is brilliant as it is this mix of ambient-based music with elements of traditional and folk-based music to play into the world of the American Midwest as it is one of Badalamenti’s finest scores.

The casting by Jane Alderman and Lynn Blumenthal is great for its usage of professional and non-professional actors as there’s appearances from John P. Farley and Kevin Farley as a couple of bickering twin mechanics and Everett McGill as a friend of Alvin who would sell him a new lawnmower to use. Other notable small roles include James Cada as a man who would let Alvin sleep in his backyard and arrange things to continue Alvin’s trip, Barbara E. Robinson as a woman with bad luck, Anastasia Webb as young hitchhiker, and John Lordan as a priest Alvin would meet late in the film. Harry Dean Stanton is fantastic as Alvin’s brother Lyle who appears in the film’s ending as it’s just this brief yet mesmerizing appearance.

Sissy Spacek is brilliant as Alvin’s stammering but capable daughter Rose who helps her father prepare for the trip while being the one to tell him the news about Lyle. Finally, there’s Richard Farnsworth in an incredible performance as he brings this sense of weariness but determination to a man that just wants to see his brother as there is also a sense of wisdom and charm to a man that is really full of life as his simple journey is one that is just extraordinary.

The Straight Story is a phenomenal film from David Lynch that features a magnificent performance from the late Richard Farnsworth. While it is considered an anomaly of sorts in comparison to the darker and more surreal films that Lynch is known for. It is still a Lynch film in terms of its restrained quirky humor and the simplicity of small town American life that isn’t seen much in American cinema. In the end, The Straight Story is a majestically rich and sensational film from David Lynch.

I've never heard of this, but it seems like a sweet little story. Which from my experience with Lynch, he doesn't exactly tell "sweet" stories. lol

It is a very, very, very different film from David Lynch but that is part of the excitement of it. I was so engrossed by it and I just loved how simple it is as well as the locations. Plus, it makes me feel like it's set in a world where decency is still around as there's not much of that these days.

It sounds like a sweet and simple story. Lovely review. I remember seeing previews for this on the indie circuit some years ago. It definitely doesn't sound like a David Lynch film, which makes me curious to see it.

@msmariah-I think that is part of Lynch's brilliance as a filmmaker. We know him for making dark and surrealistic films but he also has ways to display a sense of innocence and Americana that isn't seen. The fact that he did something that is so simple is astonishing and the result is a story that is very intriguing and captivating to watch.

It could have been unremarkable in the hands of a lesser filmmaker, but with Lynch onboard, it's great. Along with The Elephant Man, The Straight Story is probably Lynch's most tender and tear-inducing movie.

@Chris-Agreed. I felt it was more in tune with the more normal elements of Blue Velvet and Twin Peaks plus the melodrama of The Elephant Man. In another filmmaker's hands, it wouldn't work but Lynch knew what to do and he got it right.