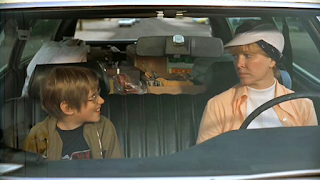 Directed by Martin Scorsese and written by Robert Getchell, Alice Doesn’t Live Here Anymore is the story of a widow who travels to the American Southwest with her young son in the hopes that she can find a better life for them. The film plays into a woman trying to start over as she struggles to find love and a new job as well as raise her pre-teen son who is going through growing pains. Starring Ellen Burstyn, Kris Kristofferson, Alfred Lutter, Diane Ladd, Jodie Foster, and Harvey Keitel. Alice Doesn’t Live Here Anymore is a mesmerizing yet compelling film from Martin Scorsese.

Following the death of her husband in an auto accident, the film revolves around a widow and her 11-year old son trying to start over in the American Southwest on their way to her hometown of Monterrey, California as she would struggle to find work and love. It’s a film that plays into a woman trying to live something that is very ideal but has to contend with the reality of her situation as well as raising a son who is quite bratty and going through growing pains. Though Alice (Ellen Burstyn) was once a singer, she realizes that finding a job to be one is difficult where she would eventually work as a waitress and later meet a kind rancher named David (Kris Kristofferson). Still, Alice would struggle to keep her son Tommy (Alfred Lutter) intact as he would eventually act out and later befriend a troublemaker named Audrey (Jodie Foster).

Robert Getchell’s screenplay plays into Alice’s trials and tribulations as the first act has her coping with the death of her husband despite their turbulent relationship as she realizes that she needs to move from New Mexico and back to her hometown of Monterrey. Much of the film’s first half is a road movie where Alice and Tommy try to find a place to live as well as a job for Alice as she would get a job as a singer for a bar but it wouldn’t last due to an unfortunate tryst with a young man named Ben (Harvey Keitel). The second half would have Alice finally settle in Tuscon, Arizona hoping it would be temporary as she realize the only job she can get is a diner waitress where is later guided by the waitress Flo (Diane Ladd). At the same time, Alice ponders if she can have a relationship as the film also has a feminist message of sorts about what Alice really wants and what she needs to do for herself and for her son.

Martin Scorsese’s direction is very intimate in the way he captures Alice’s turbulent life as well as the world that she has to deal with that is quite chaotic. The film opens in the style of a melodrama and in a full-frame aspect ratio where it shows a young Alice fantasizing about being a singer in the farm that she’s in. When she then says something profane, it becomes clear that this is not a 1950s melodrama as it shifts into a widescreen aspect format to play into Alice’s troubled life with her husband and son Tommy who is listening to Mott the Hoople in loud volume. It establishes that Alice hasn’t reached her goal as she deals with a neglectful husband and a bratty kid where things would change once her husband dies. Much of Scorsese’s compositions are very simple as he does take advantage of the beauty in the many locations in the American Southwest in places in New Mexico and Arizona.

For many of the scenes at the motels and at the diner, Scorsese would employ a lot of hand-held camera tracking shots to play into the drama as well as to capture Alice trying desperately to look good so she can get a job. Even the scenes in the diner shows how frenetic things are where Scorsese would maintain that intimacy with a sense of style in the hand-held camera shots. There are also moments where Scorsese would play into something that feels very loose in the way Tommy would go into his own adventures with Audrey as it would play into his own sense of acting out. Especially as it would boil the tension between him and Alice as it relates to what Alice wants in her life but also what she needs to do for herself and Tommy. Overall, Scorsese creates a very engrossing yet spirited film about a woman starting over with her son.

Cinematographer Kent L. Wakeford does excellent work with the film‘s cinematography to capture the sunny look of the locations in its exteriors along with some unique lighting for some of the scenes set at night including the scenes in Phoenix where Alice would spend time with Ben. Editor Marcia Lucas does nice work with the editing as it is straightforward with some rhythmic cuts for some of the comedic and more heavier moments in the drama. Production designer Toby Carr Rafelson does fantastic work with the look of the motels Alice and Tommy lived in as well as the diner and David‘s ranch. Sound mixer Don Parker does terrific work with the sound in capturing the atmosphere of the diners and bars as well as some of the music that is played on location. The soundtrack would feature not just a few pop standards but also contemporary music from Mott the Hoople, T-Rex, Elton John, Leon Russell, and Dolly Parton.

The film’s amazing cast includes some notable small roles including an early un-credited appearance from Laura Dern as a young girl in glasses eating an ice cream cone at the diner, director Martin Scorsese as a diner customer, Lane Bradbury as a woman who has some connection with Ben, Harry Northup as a bartender that helps Alice in Phoenix, Billy “Green” Bush as Alice’s late husband Donald who appears early in the film, Leila Goldoni as Alice’s best friend Bea who helped her with the move, Valerie Curtin as the shy and timid waitress Vera, and Vic Tayback as the diner’s owner/short-order cook Mel. Harvey Keitel is superb as Ben as this man who meets Alice at a bar in Phoenix as they would have a brief relationship that doesn’t last. Jodie Foster is wonderful as a teenage tomboy named Audrey whom Tommy would meet in Tucson as she would introduce him trouble as well as saying very foul language.

Diane Ladd is fantastic as the waitress Flo as a sass-talking woman who is quite hardened as she helps Alice in keeping her head straight as it’s a performance that is just fun to watch. Kris Kristofferson is excellent as David as a kind rancher who understands what Alice is going through as he wants to help her and Tommy while dealing with Tommy’s bratty behavior. Alfred Lutter is brilliant as Tommy as this pre-teen kid who is very talkative as he copes with being bored as well as finding somewhere to be at as it’s a very wild yet naturalistic performance for the actor. Finally, there’s Ellen Burstyn in an incredible performance as Alice as this widow who is forced to start over as her dreams of being a singer is pulled by the wayside in order to care and raise her son as well as find out what she really wants in her life as it’s a funny but also gripping performance from Burstyn.

Alice Doesn’t Live Here Anymore is a remarkable film from Martin Scorsese that features a magnificent performance from Ellen Burstyn. While it is a very different film from some of the more urban films that Scorsese is known for. It is still one of his finest in terms of character study as well as being a feminist film of sorts where a widow is trying to come to terms with what she has to do with her life and for her son. In the end, Alice Doesn’t Live Here Anymore is a phenomenal film from Martin Scorsese.

This is one of those lesser-known Scorsese's films I still need to see. What a terrific cast here, nice to see Ellen Burstyn in the lead role, too.

Agreed. It's a film that I think more people should see. Especially for anyone that loves Martin Scorsese.

This is one of Scorsese flicks I haven't seen. From the outside looking in, it doesn't seem like a movie he would make. Then again, I thought that going into Hugo and that turned out pretty good.