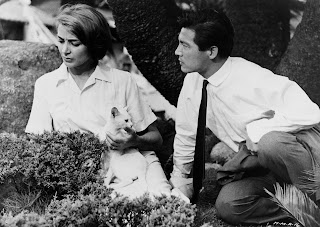 Directed by Alain Resnais and written by Marguerite Duras, Hiroshima Mon Amour (Hiroshima My Love) is the story of an affair between a French actress and a Japanese architect in post-war Hiroshima as they cope with their own feelings of love and loss. The film is a study of anguish and longing in a place where a city had lost itself to war. Starring Emmanuelle Riva, Eiji Okada, Stella Dassas, Pierre Barbaud, and Bernard Fresson. Hiroshima Mon Amour is a riveting yet exhilarating film from Alain Resnais.

Set in the span of 36-hours, the film revolves around a forbidden affair between a French film actress (Emmanuelle Riva) and a Japanese architect (Eiji Okada) as they spend time in the city of Hiroshima as they reflect on what happened during the war as the actress also recalls memories of an affair she had with a German soldier during World War II. It’s a film that is a simple story about these two people having an affair as they deal with elements of loss and the need for love in a world that is still reeling from the scars of war. Notably as the actress is making a film about what happened in Hiroshima during the war as she tells the architect about her past. Marguerite Duras’ screenplay does have a unique narrative that plays into the time these two people spend with each other but also about their own past as the architect tells bits about his time as a soldier in the war as it plays into the sense of loss and anguish the two endure in the span of 36 hours.

Alain Resnais’ direction is very mesmerizing in not just the way he approaches his compositions but also in playing into Hiroshima’s own resurrection as a modern city but still carry the scars of the war. The direction includes some intricate yet hypnotic tracking and dolly shots to play into not just the city of Hiroshima but also in the hometown of the actress in Nevers, France. Resnais creates compositions that match into the landscapes of the two cities as it plays into two world and two characters who both felt lost as well as a sense of longing to return to a time where things were simpler. Notably for the actress who was shamed for her affair with this German soldier by her town after the war ended as her affair with this Japanese architect also has an air of taboo.

Resnais’ usage of close-ups and mesmerizing shots such as the opening shots of the two making love with dust and ashes covering them or shots of their hands play into the sense of longing. Especially in what the actress is dealing with as it regards to her past as she also knows she has to return to Paris and go back to the life she already has. Its third act is about the actress struggling with the decision to leave but also wonders if she can stay and relive something that she once had. Even as the architect tries to get her to stay home as he realizes about the unhappiness in his own life and the need for her to be with him. Overall, Resnais creates a very engaging yet evocative take on the world of loss and longing in a post-war world.

Cinematographers Sacha Vierny and Michio Takahashi do incredible work with the film‘s black-and-white cinematography in terms of the richness of the visuals as Vierny would shoot scenes set in Nevers, France while Takahashi would shoot Hiroshima as both contained matching visual motifs as it‘s one of the film‘s highlights. Editors Henri Colpi and Jasmine Chasney do excellent work with the editing in compiling stock footage and other images to create something that mixes documentary and fiction along with montages and stylish cuts to play into the world of past and present. Production designers Minoru Esaka, Mayo, Petri, and Lucilla Mussini do amazing work with the bars and places the two protagonists go to including some realistic places such as Hiroshima’s museum of what happened in 1945.

Costume designer Gerard Collery does nice work with the clothes from the dress that the actress wears and the suit that the architect wears along with the clothes for the actress‘ flashback scenes. The sound work of Pierre-Louis Calvet and Rene Renault does terrific work with the sound to play into what happens on the locations as well as . The film’s music by Georges Delerue and Giovanni Fusco is fantastic as it is this mixture of orchestral-based music with some jazz elements as it plays into not just some of the melancholia but also the arrival of a new world emerging from the ashes of war.

The film’s cast includes some superb small performances from Stella Dassas and Pierre Barbaud as the actress’ parents in the flashback scenes and Bernard Fresson as the actress’ German lover from the flashbacks. Eiji Okada is great as the architect who lives in Hiroshima as he deals with his own past as a soldier and what he had lost as well as his feelings for the actress. Finally, there’s Emmanuelle Riva in a phenomenal performance as the actress as a Frenchwoman visiting Japan for work as she copes with her past as a young woman who fell for a German soldier during World War II as well as her own feelings for the architect where Rivas brings a radiance to her performance as a woman dealing with loss and anguish.

Hiroshima Mon Amour is an outstanding film from Alain Resnais. Featuring magnificent performances from Emmanuelle Riva and Eiji Okada as well as some amazing technical work in its music, photography, and setting. It is a film that plays into the world of loss and loneliness in an ever-changing world as this film is among one of the key films of the French New Wave. In the end, Hiroshima Mon Amour is a tremendously rich and sensational film from Alain Resnais.

This is a beautiful review. I'll add this movie to my list.

Timely pick considering the Hiroshima anniversary, Steven. It sounds very interesting, as I need to catch up on more French New Wave film, I'll put this one on the list!

@Stephanie Marshall Ward-Thank you. I hope you enjoy the film.

@ruth-Well, it was actually a couple of days earlier and today is the anniversary of what happened in Nagasaki. It wasn't really planned as I just needed something to watch. Plus, I recently purchased the film on DVD so I decided to watch it.

Beautiful review of a beautiful film. This is one of those films that rests on me quite heavily, impacting me more the more I think of it. It lingers. Riva is remarkable here.

Fabulous review! This is sooo high on my "I need to get off my butt and watch this" list.

@Fisti-It is an amazing film and I'm so glad I bought a copy of it. I'll expand the review hopefully sometime within the year as I want to look into its special features. It's a great film.

@keith71_98-Thank you. I finally saw it and now I want to see more of Resnais' films and other staples of the French New Wave.

Haven't seen it, but you give good review!

@assholeswatchingmovies.com-Thank you. Hope you see it soon.

The use of non-linear flashback storytelling is impressive, but to me also confusing. I liked how it balanced the big event with the pain of the individuals. The protest with the crowd carrying Stop thermal nuclear testing banners was memorable, but that's all I remember.
There's a lot of dialogue. Because the screenwriter is an author, Hiroshima Mon Amour to me felt more suitable for a wordy book than a movie. It has its moments, just not as visually striking as Alain Resnais' masterpiece Last Year at Marienbad (1961)

@Chris-While I too prefer Last Year at Marienbad, I still think this is an awesome film in terms of its usage of non-linear narratives and flashbacks.