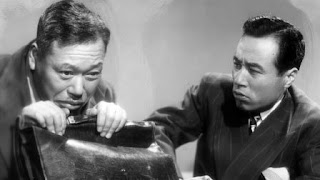 Directed and edited by Akira Kurosawa and written by Kurosawa and Ryuzo Kikushima, Shubun (Scandal) is the story of a painter’s supposed affair with a famous singer becomes scandal as he tries to fight the press in court where he deals with a lawyer who is forced to play both sides. The film is an exploration of the growing moral decline that is surrounding Japan in the early post-war years as a man tries to fight for his honor with an attorney pulled in two different directions to find justice. Starring Toshiro Mifune, Takashi Shimura, Shirley Yamaguchi, and Noriko Sengoku. Shubun is a compelling and touching film from Akira Kurosawa.

A painter’s encounter with a famous singer prompts a tabloid magazine to make claims that the two are having an affair where the painter sues the magazine for telling lies as he hires a weak-willed lawyer who finds himself being coerced by the magazine’s editor. It’s a film that explores the world of post-war Japan where a painter and a singer find themselves caught in a lie made by a popular tabloid magazine as the painter wanted an apology. When the painter hires this aging lawyer who is known for having a lot of bad luck and has an ailing daughter, things get troubled when the lawyer finds himself being tempted by what the magazine’s editor would offer as a way to kill the lawsuit.

The film’s screenplay explores this growing sense of immorality as the painter only met the singer on a mountain road because she missed her bus and was going into the hotel the two were stating. They had a conversation where a photographer and a journalist would create a story and chaos ensues. Even where this attorney named Hiruta (Takashi Shimura) thinks he can help the artist Ichiro Aoye (Toshiro Mifune) but a meeting with the magazine editor Asai (Shinichi Himori) would create trouble by bribing the already unlucky Hiruta. Once Aoye discovers what kind of man Hiruta is as well as know about Hiruta’s family life which would prompt Aoye to see that Hiruta could do good no matter who severe his life is.

Akira Kurosawa’s direction is quite simple in terms of the compositions he creates as well as the intimacy he would maintain for much of the dramatic moments in the film. While much of it is shot in Tokyo and areas outside of the city, it plays into something that feels modern where Japan is caught up in the world of celebrity. Kurosawa’s usage of close-ups and medium shots help play into the drama as well as scenes set in the magazine office where the editor and his staff conspire to make money as it plays into this growing sense of immorality in Japan. Also serving as the film’s editor, Kurosawa’s stylish approach to transition wipes and a mesmerizing dissolve montage would play into this sense of cultural change where everyone is up in arms about reading Aoye’s supposed affair with the singer Miyako Saijo (Shirley Yamaguchi). The film’s climax revolves around this trial where it is clear that there is a circus atmosphere that plays into this sense of changing times but there is still a place where the old rules can make a difference as it plays into what Hiruta is dealing with. Overall, Kurosawa creates a fascinating and engaging drama about two men fighting for the truth in a world where morality is lost.

Cinematographer Toshiro Ubukata does excellent work with the film‘s black-and-white photography to play into the growing sense of modernism in Japan as well as some unique lighting schemes for scenes set at night where it has elements of film noir in some of the images. Art director Tatsuo Hamada does fantastic work with the look of the magazine offices as well as the dilapidated place where Hiruta does his work. Costume designer Bunjiro Suzuki does nice work with the costumes from the ragged look of Hiruta to the stylish suits that Asai wears. The sound work of Saburo Omura is terrific to play into the sounds of the city as the quieter moments in Aoye‘s meeting with Saijo at the hotel. The film’s music by Fumio Hayasaka is amazing for its score as it features some somber string-based orchestral music to elements of sweeping themes to play into the drama and sense of modernism in the film.

The film’s superb cast includes some notable small roles from Fumiko Okamura as Saijo’s mother, Masao Shimizu as the trial judge, Bokuzen Hidari as a drunk Aoye and Hiruta meet at a bar, Sugisaku Aoyama as Asai’s lawyer, Noriko Sengoku as Aoye’s assistant/model Sumie, Shinichi Himori as the smug and vile magazine editor Asai, and Yoko Katsuragi in a wonderful performance as Hiruta’s ailing daughter Masako who is dealing with tuberculosis as she looks for her father to do something good. Shirley Yamaguchi is terrific as the famous singer Miyako Saijo who is someone that wants privacy as a simple picture would cause some trouble to her career as she would befriend Aoye and Hiruta’s family. Toshiro Mifune is brilliant as Ichiro Aoye as a painter who finds himself in a scandal as he fights for the truth while coping with his reputation and honor. Finally, there’s Takashi Shimura in a phenomenal performance as Hiruta as a down-on-his-luck attorney who is assigned to help Aoye as he struggles with his own debts where he is coerced by Asai to drop the suit for money as well as his daughter’s illness where he struggles with his own conscious to do what is right.

Shubun is a remarkable film from Akira Kurosawa that features great performances from Toshiro Mifune and Takashi Shimura. It’s a film that explores the growing sense of immorality during the early post-war years in Japan in a world driven by tabloids and greed. Especially when two men are forced to fight against this new world order to maintain some decency that is left from the old world. In the end, Shubun is a sensational film from Akira Kurosawa.

This sounds pretty good. I've been meaning to see this for some time, so I'll have to try and get my hands on it soon!

I think it's still available on DVD as part of Criterion's Eclipse series as there's 2 box sets of Kurosawa's early films including one from the post-war years. I have one more film of his I'm going to do that one in the coming days. It now means I will have covered just about more than half of his filmography.