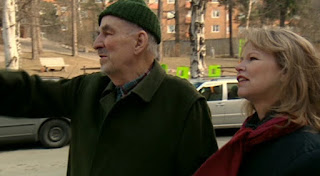 Directed by Marie Nyrerod, Bergman Island is a documentary in which Nyrerod talks to the legendary Swedish filmmaker Ingmar Bergman in his home at Faro Island as he talks about his career. Shot in 2002, the film takes a look at the filmmaker in his final years as he would discuss many things in his life and his career. The result is a fascinating film about one of cinema’s great filmmakers.

The film isn’t just a simple story about the life and career of one of the greatest filmmakers in film but it is largely told from his own words in the island of Faro which he calls home as he talks to Marie Nyrerod. Featuring rare behind-the-scenes footage of the films he made as well as a look into him making his final film in 2003’s Saraband, Ingmar Bergman goes into great detail to talk about his life and career in film, theater, and television. Though the film version is a truncated 80-minute version of a much longer three-part documentary made for Swedish television, the result is still fascinating as it has Bergman discussing many things in his life.

Among them are his many affairs with his actress such as Bibi Anderssen, Liv Ullman, and Ingrid Thulin as well as his own relationship with his family. Even as he talks about some of the aspects of his own personal life and how he would put them in his own films as Nyrerod would put in some footage of Bergman’s films into the mix. While Bergman is primarily known for his work in film, Nyrerod does take time to showcase his work in television and theater as the latter is something Bergman really loves to do as some rare footage of his theater work are shown.

With the aid of a small crew that consists of cinematographer Arne Carlsson, editor Kurt Berkman, and the sound work of Per Nystrom, Nyrerod would create something that isn’t just an intimate portrait where Bergman would show rare family photos and such but also play into some insight into life with some humor which is sort of surprising considering how serious his films are. Most notably a moment where he drives Nyrerod to his little studio where he is making Saraband where he passes it and then drives around it to park. Much of the film’s music consists of classical piano sonatas as much of them had appeared in Bergman’s films as they provide a nice accompaniment to the interviews.

I've seen a few of Bergman's films, but I don't think I've ever heard from him directly. This sounds interesting just from that aspect.

It was on Turner Classic Movies this past Monday as part of a celebration of the Telluride Film Festival. Though it is a short version (yet supervised by Bergman and the film's director), it's still worth watching and available on Criterion and through Hulu. It's something fans of his work should see.

I'll have to watch this. Like Dell pointed out, I don't think I've actually heard from the man himself, just seen a few of his movies. (3 on last years Blind Spot, and 2 on this one)

@Brittani-It's a must for anyone who is into Bergman as it is actually quite fun to watch but we also see moments where some of his ideas came from. There had been interviews with the director but this was different as it is more intimate and set in his home.

Nice review here, and holy shit, I never knew a three hour version of this film existed. Would love to get my hands on that somehow.

@Alex-I too would want to see a 3-hour version of this. Hell, maybe 10 hours of Bergman talking about film and art.