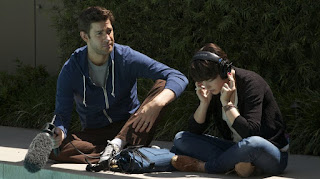 Directed by Ry Russo-Young and written by Russo-Young and Lena Dunham, Nobody Walks is the story of a young woman who moves into the guest home of a wealthy family to complete an art project where she unknowingly disrupt their life. The film is an exploration into a family whose quaint and idealistic life is shattered by an innocent outsider who has no clue what she had gotten herself into. Starring Olivia Thirlby, John Krasinski, Rosemarie DeWitt, India Ennenga, Dylan McDermott, and Justin Kirk. Nobody Walks is an intriguing yet mesmerizing film from Ry Russo-Young.

The film revolves around a 23-year old filmmaker who moves into the guest home of another filmmaker who will help her with the project she’s making as she finds herself getting involved in the life of this wealthy family. It’s a film that plays into a woman whose arrival doesn’t just create a bit of chaos in the life of this family but does it so without meaning to as she just needed help with her film. The film’s screenplay doesn’t just play into the ideas of a woman finding herself interfering a bit with the life of a family but also how things just happen amidst this chaos. Yet, the script doesn’t judge Martine (Olivia Thirlby) for her actions as she is just a young woman that needed help but she is also kind of flirtatious as she charms her host Peter (John Krasinski) where the two have a secret affair. Yet, things in Peter’s life become troubling when his therapist-wife Julie is dealing with a patient who reveals to have feelings for her while her daughter Kolt (India Ennenga) is dealing with growing pains and a creeping Italian tutor (Emanuele Secci).

Ry Russo-Young’s direction is very simple as she shoots the film largely on location in the Silver Lake area in Los Angeles. Russo-Young’s approach to hand-held cameras and the usage of close-ups and medium shots help play into the intimacy that looms throughout the film. Much of it is very loose in terms of how the actors are shown in the frame or in a scene such as a dinner sequence where Julie’s ex-husband Leroy (Dylan McDermott) shows up for a visit where it does make things a bit uncomfortable. The direction also feature some low-key humor but it’s mostly dramatic since it plays into this young woman needing help for her experimental film. The film-within-a-film is an experimental feature involving bugs where Martine just needed some sound as it plays like many experimental/art-driven films which play into Martine’s own personality. Even as she is someone that is in need of a home or companionship but manages to make a mess of things as she tries to fix them. Overall, Russo-Young creates an engaging yet low-key film about a young artist whose presence nearly causes trouble for a family.

Cinematographer Christopher Blauvet does brilliant work with the film‘s cinematography in capturing the sunny look of the locations as well as creating some low-key lights for many of the film‘s nighttime interior/exterior scenes as well as Peter‘s sound room. Editor John Walter does nice work with the editing as it is mostly straightforward with some stylish jump-cuts to play into some of the dramatic moments into the film. Production designer Linda Sena and art director Mando Lopez do excellent work with the look of the home that Peter and Julie live in as well as Martine‘s guest home and the design of Julie‘s office.

Costume designer Kim Wilcox does terrific work with the costumes as it is largely casual with the exception of some of the stylish clothes that Martine wears. Sound designer Rich Bologna does fantastic work with the sound to create the many textures and sound effects that Martine needed for her film as well as capture some of the moments in the places the characters go to. The film’s music by Will Bates and the indie band Fall on Your Sword is wonderful for its mixture of dreamy and ambient music that plays into the Californian landscape while music supervisor Tiffany Anders brings in a mixture of folk and electronic music for the film’s party scene.

The casting by Kerry Barden and Paul Schnee is superb as it features some notable small roles from Jane Levy as Kolt’s classmate Caroline, Sam Lerner as another of Kolt’s classmate in Avi, Mason Welch as Peter and Julie’s son Dusty, Emanuele Secci as Kolt’s creepy Italian tutor, Rhys Wakefield as Peter’s assistant David whom Kolt has a crush on despite flirting with Martine, and Dylan McDermott in a terrific role as Julie’s ex-husband/Kolt’s father Leroy who arrives for dinner as he would create some discomfort for Martine and Peter. Justin Kirk is excellent as Julie’s patient Billy who reveals to her that he had dreams of having sex with her where a later encounter at the party makes Julie really uncomfortable. India Ennenga is fantastic as Kolt as Julie’s teenage daughter who deals with growing pains as she has a crush on step dad’s assistant while dealing with the strange teachings of her Italian tutor.

Rosemarie DeWitt is brilliant as Julie as a therapist who deals with Martine’s presence as well as her own issues as it’s a very low-key yet charming performance from DeWitt. John Krasinski is amazing as Peter as a filmmaker and stay-at-home dad who helps Martine do sound work on her film as he would fall for her only to deal with the implications of their tryst. Finally, there’s Olivia Thirlby in a phenomenal performance as Martine as this young artist who is seeking help to finish her experimental film as she is grateful for the help only to be flirtatious at times as it’s a very complex and charismatic performance from Thirlby.

Nobody Walks is a brilliant film from Ry Russo-Young that features incredible performances from Olivia Thirlby, John Krasinski, and Rosemarie DeWitt. With a captivating script and subtle themes on family, trysts, and art, it’s a film that doesn’t try to be or say anything but showcase the idea of needing to help and how someone can unknowingly screw things up. In the end, Nobody Walks is an amazing film from Ry Russo-Young.

I wanted to like this film. I certainly like the cast, especially Olivia Thirlby, but I felt every character was underwritten except Martine. Lena Dunham can only write "hip New York 20 somethings" and that's why it felt like she was the only fleshed out one to me. It had an interesting story, but I could never get around that. Great review!

It did have some flaws but I still enjoyed it as I was really into what Olivia Thirlby did as she should get more attention.

I saw this a few years ago at a local film fest. Like Brittani said, I really want to like this one and I thought the premise was intriguing. But I hated it, I just couldn't connect w/ the story and the main character irritated me. Perhaps that was the point? I don't know. But I do like Rosemarie DeWitt in it, she's kind of the saving grace of the film for me.

@Ruth-It is a flawed film but I did enjoy it. I think it has to do with how minimal the story is and the fact that the director wanted something more stripped down. I would've also like to have more insight and such on the characters but it is what it is.