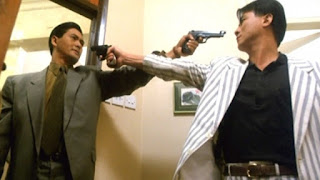 Written and directed by John Woo, The Killer is the story of an assassin who decides to do one more hit in the hopes to redeem himself after an accident that left a singer nearly blind which he feels responsible for. The film is a story of redemption set in Hong Kong where a man’s mistakes forces him to try and do things right in a chaotic world while a cop tries to go after him and wonder why these acts of valor. Starring Chow Yun-fat, Danny Lee, Sally Yeh, Chu Kong, Kenneth Tsang, and Shing Fui-On. The Killer is a bloody yet exhilarating film from John Woo.

Following a botched shoot-out that left a singer nearly blind by a muzzle flash, a triad assassin tries to redeem himself by helping the singer in regaining her sight while he finds himself being pursued by a police detective following another assignment the assassin was involved in. It’s a film that plays into two men who live by a code of rules and honor in their respective work yet they’re dealing with a world that is ever-changing as it’s more about protecting the wrong people or making money by any means necessary. When the assassin Ah Jong (Chow Yun-fat) is asked to kill a boss only to be double-crossed where he kills those that try to kill him, he sees that a child was shot where he tries to save her by taking to the hospital. Upon arriving, he would be confronted by the detective Li Ying (Danny Lee) who wants to arrest him but realizes that Jong isn’t a villain for trying to save this little girl where the two realize that they share something that is lost in the bloody crime world of Hong Kong.

John Woo’s screenplay doesn’t just explore the themes of honor, valor, and respect but also play into that sense of a world that is ever-changing where Ah Jong wants out as he’s seen too much violence and too much death. Li Ying, meanwhile, is a man that wants to stop bad from doing things as he finds himself at odds with bureaucratic officials who want to things to be smooth and slow. Wanting to help this singer named Jenny (Sally Yeh) who is becoming blind and needs a cornea transplant, Ah Jong would reluctantly take the assignment that would eventually expose him and be double-crossed as he tries whatever he can to get out of the triad with the help from one of its elders in Fung Sei (Chu Kong) in getting the money as he too is at odds with the new ways of the triad. With Ying pursuing Jong, the two would eventually have encounters where they have their guns pointed at each other but it is clear neither man want to kill the other. Once Ying and his partner in Sgt. Tsang Yeh (Kenneth Tsang) realize what is going on in the triad as well as Jong’s true intentions. It is clear that Jong is trying to do the right thing where Ying finds himself targeted by the triad forcing the two to work together.

Woo’s direction is definitely stylish for not just the way he captures the vibrancy that is Hong Kong for its locations at night as well as the places where ordinary people live in and near the island. Hong Kong is definitely a character in the film as it displays that sense of conflict in modernism vs. tradition where both Ying and Jong are men who are modern men but with traditional values as they realize that those values are being pushed aside. Shooting largely on location in Hong Kong gives the film a sense of energy in the way some of the chases and violence is presented where it very stylized and at times, very brutal. Yet, Woo adds something where it’s not just this bang-bang, boom, pow mentality as there is a fluidity to the gun fights in the way the camera moves and captures the action. It’s as if Woo is creating a ballet of sorts with guns, bloods, and all sorts of crazy shit where it has a sense of beauty beneath this sense of chaos where lots of men are getting killed.

The usage of wide and medium shots would play into not just the look of the locations but also in the presentation of some of the massive sequences where the usage of some crane and tracking shots help play into some of the intense moments including the fluidity of the violence. Woo’s close-ups would play into the drama along with some of the medium shots including a three-way meeting with Jenny, Ying, and Jong where the two men pretend to be friends knowing that Jenny couldn’t really see anything. It has bits of humor in the film while its third act would slow things down a bit once Ying and Jong get to know each other as it is clear that despite being in different worlds of the law. They’re both men trying to do what is right as the film’s climax isn’t just operatic in its presentation but also has this sheer sense of brutality into what is at stake. Overall, Woo crafts a visceral yet enthralling film about an assassin’s attempt to find redemption with the help of a detective.

Cinematographers Wong Wing-hang and Peter Pao do amazing work with the film‘s colorful cinematography with its usage of neon lights for the much of the nighttime exteriors in the city as well as some low-key lights for some of the gun battles as well as the usage of filters for some of the scenes set in the morning. Editor Fan Kung-ming does brilliant work with the editing with its stylish usage of slow-motion cuts, jump-cuts, and dissolves as it plays into a sense of rhythm and fluidity for much of the action while being straightforward for the dramatic moments. Art director Man-Wah Luk and set decorator Jan-Ching Tai do excellent work with the look of the homes that Jong and his friend Fung Sei live as well as the church that the former likes to go to.

Costume designer Shirley Chan does nice work with the costumes as it is play into the look of the suits that Jong wears along with the more casual look of Ying. The sound effects of Siu-Lung Ching is terrific for the way a lot of the gun fire sound as well as the way some of the tires sound during the chases. The film’s music by Lowell Lo is fantastic for its electronic-based score with its soothing keyboards and bits of jazz while the soundtrack also features bits of jazz, classical, Cantonese pop, and some harmonica that Jong would often play in the film.

The film’s phenomenal cast include a few notable small roles from Barry Wong and Parkman Wong as a couple of top police officials Ying tries to deal with, Ricky Yi Fan-wai as a hitman Wong Hoi hires to kill Jong, and Shing Fui-on in a superb performance as the triad boss Hay Wong Hoi who is ruthless in his dealings as well as being someone that wants to rule Hong Kong with an iron fist. Chu Kong is excellent as Jong’s friend and triad elder Fung Sei as a man that is loyal to Jong as he is aware of what he had to do for Wong Hoi only to find himself in a moral conflict on what is the right thing to do. Kenneth Tsang is fantastic as Sgt. Tsang Yeh as a veteran cop who aids Ying in trying to catch Jong where he makes a discovery of his own as it relates to the triad and what Jong is trying to do. Sally Yeh is brilliant as Jenny as a club singer who becomes blind due to a muzzle flash as she copes with her ailment while falling for Jong unaware of what he did to her.

Danny Lee is amazing as Li Ying as this detective who likes to play by his own rules as he tries to catch Jong while realizing that Jong is a good man where he tries to help him where they reluctantly team up against the triad. Finally, there’s Chow Yun-fat in a sensational performance as Ah Jong as this assassin who finds himself in conflict over a botched assignment that left a woman nearly blind where he tries to get out only to become a target where he realizes that he needs Ying to help him as it’s a very calm yet powerful performance from Yun-fat in one of his most iconic roles.

The Killer is a magnificent film from John Woo that features great performances from Chow Yun-fat and Danny Lee. Featuring an incredible supporting cast, cool music, a compelling premise, and stylized gun battles. The film isn’t just a crime film that has a lot of power but also presented with a sense of beauty that isn’t seen much in crime and action films. In the end, The Killer is an outstanding film from John Woo.

I've never seen this, but it sounds like it would be a good watch. Nice write up!

This reminds me I really need to get on my April blind spot.

This is right now, so far, the best Blind Spot film I've seen this year. It was just fun from start to finish as I just love the beauty of the violence in the film as it had bits of poetry but also ballet-like. I haven't seen any of John Woo's pre-Hollywood crime films and this goes to show that they're so much better than what he did in Hollywood.

I love your previous comment. I love this film. I love to count the bullets. I love the sequence of action. I put myself in Woo's chair for each action scene. I'm sure you have watched his other masterpiece: Hard Boiled. Who could forget a baby that puts a fire out with its urine.

For some reason I have had tje damndest time getting my hands on this and have never seen it. I love Hard Boiled and I am aching to see this.

@Matthew Lettington-Actually, I haven't seen Hard Boiled. That's another film that I really, really, really want to see as I hope to do that one soon.

@Wendell-I was able to find the film in a damn good quality through torrents as I hope to find Hard Boiled in a similar quality as I've had fun watching this one.