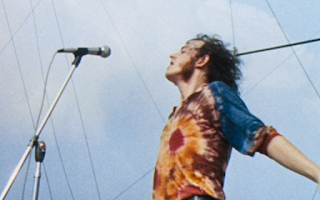 Directed, co-shot, and co-edited by Michael Wadleigh, Woodstock is a documentary-concert film that chronicles the Woodstock Music and Arts Festival at Bethel, New York from August 15 to 18 in the year of 1969. Featuring an array of performances from acts such as Jimi Hendrix, the Who, Janis Joplin, Joe Cocker, Sly and the Family Stone, Jefferson Airplane, and many others. The film also takes a look at scenes around the festival including the small town of Bethel whose residents deal with hippies who are coming to their small town to attend a big music festival. The result is an absolutely exhilarating and rapturous concert documentaries ever made.

On August 15-18 in the small town of Bethel in upstate New York, three days of peace, love, and music commenced where nearly half-a-million people attended for a good time where they listened to a lot of music. In the course of three days, the concert would be considered a massive event as director Michael Wadleigh would join a crew of cameramen and capture not just the concert itself but the events in between where he would talk to the people at the show as well as the locals in Bethel. There, Wadleigh would see if there is a sense of culture clash but saw something much richer where the locals reacted very well to the young kids and also helped them with food and medical supplies. Even the authorities proved to not be a hassle and help out where for a little while, a sense of utopia was created in a farm though not everyone was happy such as a cranky neighbor angry over his cows not being milked.

Along with a few incidents where a couple of people died at the festival where one from a heroin overdose and someone else being run over by a tractor. Wadleigh was able to capture a sense of spirit as well as a community just coming together to help each other out and have a good time. Even as there are those that come to the festival wanting to see these acts and listen to the music where they’re also trying to find themselves. Some of which aren’t hippies but those who are curious about what this festival is about yet there are those who realize that it isn’t for everyone. Amidst all of this excitement for music, free love, nude bathing, and such, there are these little moments in the film that are unique that includes people calling on payphones to talk to their parents and just tell them their fine despite these reports from the press that it is a disaster area.

Then there’s the performances as the standouts from the likes of Joe Cocker, the Who, Jimi Hendrix, Santana, Richie Havens, Sly & the Family Stone, Janis Joplin, and Crosby, Stills, & Nash are presented with a sense of enthusiasm and power. Other performances in the film from Canned Heat, John Sebastian of the Lovin’ Spoonfuls, Joan Baez, Ten Years After, Country Joe & the Fish, Arlo Guthrie, and the Jefferson Airplane also provide some unique moments with Guthrie having a very funny moment in the film where he tells the audience that New York thruway is closed and he was rapping to the fuzz. Another funny moment involves Crosby, Stills, & Nash where they revealed that this is their second performance and they’re scared shitless. Yet, of all the groups that appear in the film, the rock n’ roll revival group Sha-Na-Na is one of the oddest moments in the film as they’re playing old-school 1950s rock in a cover of At the Hop as they come off as the most square group in the line-up but somehow managed to win the audience over.

With the aid of co-cinematographers Malcolm Hart, Don Lenzer, Michael Margetts, David Myers, Richard Pearce, and Alfred Wertheimer, Wadleigh would shoot as much footage as he could of the performances and activities outside of the show including some behind the scenes footage where one of its organizers in Michael Lang tries to make sure the performers are there and very little helicopters would fly over the festival. Much of it is presented in a loose form with hand-held cameras along with stylistic reverse shots and compositions where Wadleigh would also play with the numerous aspect ratios in the film to create something is larger than life. Helping him with the change in aspect ratios and multiple point-of-view shots in the editing would include co-editors Martin Scorsese, Thelma Schoonmaker, Stan Warnow, Yeu-Bun Lee, and Jere Huggins. The editing would feature multiple split-screen screens to play into not just the music but also the reaction from the audience and the musicians themselves towards the music.

The sound work of Dan Wallin and L.A. Johnson, with additional work by Greg P. Russell and George Groves for the 1994 director’s cut edition, would help create a soundtrack that captures the liveliness of the performances and the reaction of the audience itself. The 1994 director’s cut film which features 40 additional minutes of material including full performance from Canned Heat, Jefferson Airplane, Janis Joplin, and a couple of songs from Jimi Hendrix as well as a few extended interview clips do give the film more of what the festival was about. Even as it also showcases a bit of melancholia of those that had passed on as both Hendrix and Joplin would die in the year of the film’s original’s release in 1970. Overall, Wadleigh creates a film that is just mesmerizing in not just the music but in the event itself.

Woodstock is a spectacular film from Michael Wadleigh. It’s not just one of the definitive documentary concert films but it’s a film that captures an experience that will never be replicated. Especially at a moment in during one of the most tense periods in American history where for three days. Peace and love was able to coexist in small town in upstate New York no matter how old they were or what generation they’re from. In the end, Woodstock is a tremendous film from Michael Wadleigh.

I really enjoyed this, but man is it a long movie. I've seen it twice, but both times it took multiple sittings to get it all in.

I saw nearly half of it on Friday and the rest on Saturday as the version I saw is the near 4-hour director's cut of the film instead of the original 3 hour film. Still, it's a fucking great film. I kinda wished I fast-forwarded on Sha Na Na as I'm just baffled by their appearance on that film as they're just so... square.

Lol, I forgot about Sha Na Na. I used to watch their TV show all the time as a kid. Yes, way too square for Woodstock.

Yeah, I'm sure there were some hippies who were watching them as they were waiting for Jimi Hendrix and woke up to this and were like "huh?" That was the kind of group where if you were going to a record store or something. You'd likely to find them in the Oldies section along with Elvis, Frank Sinatra, and Benny Goodman although I kinda find the term "oldies" offensive to most of those guys. Sha Na Na though.... oy.....