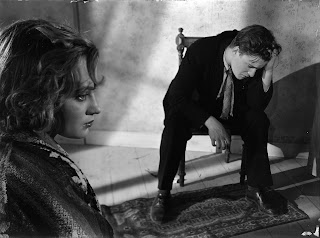 Directed by Alf Sjoberg and written by Ingmar Bergman, Hets (Torment) is the story of a boarding school student who falls for a local girl while he is being tormented by his sadistic Latin teacher. The film is an exploration of the world of torment in the world of boarding school as the film would also mark the very first film to be written by Bergman in a collaboration with one of the then-premier filmmakers in Sweden. Starring Stig Jarrel, Alf Kjellin, Mai Zetterling, Olof Winnerstand, Gosta Cederlund, Stig Olin, and Gunnar Bjornstrand. Hets is an eerie yet mesmerizing film from Alf Sjoberg.

The film revolves around a boarding school senior who is about to graduate yet still has to pass certain exams including Latin but he is tormented by the mental abuse of this teacher where he would later befriend a local checkout girl at a tobacco store who also dealing with a form of torment of her own. It’s a film that doesn’t just explore the concepts of verbal and mental torment but also two people who are both affected by it in such a way as they’re struggling to live their lives. Ingmar Bergman’s screenplay doesn’t just go into great detail into what Jan-Erik (Alf Kjellin) and Bertha (Mai Zetterling) are dealing with but also in the former as his Latin teacher that is called by students as Caligula (Stig Jarrel) is a man that is really vicious in his methods. Even as students have a hard time trying to learn Latin meet his expectations as even a few of the teachers are becoming aware of Caligula’s actions.

Jan-Erik’s escape in his time with Bertha would bring comfort but Bertha remains troubled as Jan-Erik wonders who is Bertha’s tormentor. Yet, the reveal of the tormentor isn’t a total surprise yet it adds a lot more to the subject matter as well as the tormentor himself who is a sadistic son-of-a-bitch that is a keen manipulator with some very serious issues. Especially in the third act as it relates to his own actions and what he would do to Jan-Erik that would eventually make things much worse for all involved.

Alf Sjoberg’s direction is very straightforward yet it does have some very entrancing compositions from the way he opens the film as well as maintain this tense and discomforting atmosphere in the classroom. While there are some wide shots, much of the film is presented in a more intimate manner with its close-ups and medium shots to play into the tension that looms throughout the film as it relates to Jan-Erik and Bertha. Even in the classrooms as Sjoberg would have his camera place into Caligula trying to get Jan-Erik to say things the right way with students sitting in silence as some are just scared while others want to fight back. The dramatic elements would be intense including a key scene in the third act where Jan-Erik and Caligula are met with the school’s headmaster (Olof Winnerstrand) as it plays into the idea of truth and gain. Yet, it is followed by an ending which is directed by Bergman, who was the film’s assistant director, as it relates to everything that had happened but also in what Jan-Erik would have to do with his life. Overall, Sjoberg and Bergman would create a fascinating yet dark film about the concept of torment.

Cinematographer Martin Bodin does excellent work with the film‘s black-and-white photography for the way some of the nighttime interior/exterior scenes are lit with its shadows along with more naturalistic shots for the daytime exterior scenes. Editor Oscar Rosander does nice work with the editing as it is largely straightforward with a few stylish moments that play into the intensity of the drama. Production designer Arne Akermark does fantastic work with not just the look of the classrooms but also the homes of Jan-Erik and Bertha to play into their different backgrounds.

Costume designer Mimmi Tornqvist-Zedell does terrific work with the costumes from the clothes that Jan-Erik wears to go to school to the dresses and robes of Bertha. The sound work of Gaston Cornelius is superb for the atmosphere of the classrooms where it could raucous or at times uncomfortably quiet along with some moments heard outside of the classroom. The film’s music by Hilding Rosenberg is wonderful for its orchestral-based score that played into the drama with its string arrangements.

The film’s cast feature some notable small roles from Gunnar Bjornstrand as a teacher, Hugo Bjorne as a doctor who would treat Jan-Erik in the film’s second half, Olav Riego and Marta Arbin as Jan-Erik’s parents who become concerned over his behavior, Jan Molander as a nerdy yet tortured student in Petterson, Gosta Cederlund as an elderly yet kind teacher in Pippi who is concerned about Caligula’s behavior towards the students, and Stig Olin as Jan-Erik’s friend Sandman who is very suspicious about Caligula as he really despises the man. Olof Winnerstrand is superb as the school’s headmaster as this unlikely sympathetic figure who tries to understand what is happening where he only appears late in the film but manages to exude so much into his brief appearance.

Mai Zetterling is fantastic as Bertha as a young woman who works as tobacco store clerk who is tormented constantly by a man on her way home where she befriends Jan-Erik as she becomes his lover in the hopes that she can escape from her tormentor. Alf Kjellin is excellent as Jan-Erik as a young student who deals with the constant mental abuse he receives from his Latin teacher as he struggles to pass his exams and graduate where he finds solace in this equally-tormented young woman. Finally, there’s Stig Jarrel in an amazing performance as the Latin teacher called Caligula as this man who is very mean towards Jan-Erik as well as be someone who might really be ill in some ways as it’s a very terrifying performance to watch.

Hets is a remarkable film from Alf Sjoberg that features a great cast as well as an incredible script by Ingmar Bergman. The film isn’t just a fascinating look into the concept of torment but also in what it can do to people who are extremely vulnerable. In the end, Hets is a marvelous film from Alf Sjoberg.

I have such a huge blindspot on Ingmar Bergman films. I had no idea he's also a screenwriter. This one sounds very intriguing.

Well, he does write his own films as this was actually the first script that he wrote which was produced as it's also technically his very first film. It's a damn good one as it can be found in a box set of his work from Criterion under its Eclipse banner.