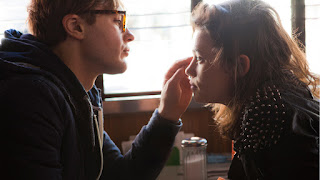 Written, edited, and directed by Mike Cahill, I Origins is the story of a graduate student whose study towards the evolution of the human eye has him meeting a young woman who would lead him into a path of discovery as it relates to his research with the aid of his lab partner. The film is a sci-fi drama that explores not just evolution but also humanity in the eyes of a man trying to understand questions he is daring to ask. Starring Michael Pitt, Brit Marling, Astrid Berges-Frisbey, Steven Yeun, and Archie Panjabi. I Origins is a rapturous and fascinating film from Mike Cahill.

The film revolves around a graduate student whose research into the evolution of the human eye would increase after a meeting with a mysterious young woman at a party where he would meet her again and later fall for her. It’s a film that isn’t just about obsession but also a man trying to see if there is any scientific explanation into the evolution of the human eye where he also want to disprove the ideas of faith and spirituality but not in a mean way. In the course of the journey that Dr. Ian Gray (Michael Pitt) would take, he wouldn’t just fall in love with this young woman named Sofi (Astrid Berges-Frisbey) but also be challenged by her in the ideas of spirituality. Yet, when his lab partner Karen (Brit Marling) makes a discovery that would prove his theory. Things would change as his time with Sofi would later haunt him for much of the film’s second half as he would go into a bigger journey.

Mike Cahill’s script has a unique structure as it play into Dr. Gray’s journey as the first half is about his time as a graduate student and his brief time with Sofi while the second half takes place seven years later where Dr. Gray has married Karen and would have a child. Yet, the program and ideas based on their research of the eye would lead to new questions as it related to not just images of what their baby would see but also into many bigger questions as it relates to matching eye patterns. It would lead to events in the third act where it isn’t just about Dr. Gray dealing with aspects of his past but also raise a lot of questions about if there is some kind of rational explanation as well as maybe there are things that can’t simply be answered.

Cahill’s direction is fascinating for not just the way he explores a man’s journey into his work as a scientist but also in the human aspects where he tries to make sense of the things he encounters. Shot on largely on location in New York City as well as India and bits of Boise, Idaho as it does have this sense of a large world as it relates to Dr. Gray’s research. While there are some wide shots in the film, Cahill maintains an intimacy as it relates to the drama where he uses some medium shots but also a lot of close-ups including extreme close-ups on the eyes. Cahill’s usage of hand-held shots and close-ups says a lot about what Dr. Gray is searching for as well as some very odd moments as it relates to the research and Karen would encounter. Also serving as the film’s editor, Cahill would create something that is straightforward with some montages as it play into Dr. Gray’s own thoughts and memories along with his own personal journey into his research which would take him to India in the film’s third act. Overall, Cahill creates a compelling yet mesmerizing film about a man’s research into the evolution of the human eye.

Cinematographer Markus Forderer does excellent work with the cinematography as it has some lovely lighting and interior shading for scenes set in the day and night in some scenes along with some of the low-key lighting for some of the daytime exterior scenes. Production designer Tania Bijlani, with set decorator Grace Yun and art director Alan Lampert, does fantastic work with the look of the lab as well as the apartment that Sofi lived in as well as the home that Dr. Gray and Karen would live in. Costume designer Megan Gray does nice work with the costumes from the more casual yet nerdy look of Dr. Gray to the more stylish look of Sofi.

The visual effects work of Michael Glen and Vico Sharabani is terrific for some of the minimal moments in the film including a crucial scene that would play an impact into Dr. Gray‘s life. Sound designer Steve Boeddeker does amazing work with the sound to play into some of Dr. Gray‘s research as well as the moments in some of the gatherings he would go to. The film’s music by Will Bates and Phil Mossman is superb for its electronic-based score that includes some ambient textures and bass-driven pieces while they would also provide additional music under the Fall on Your Sword banner with music supervisor Joe Rudge adding music to the soundtrack from some classical to a couple of pieces by Radiohead.

The casting by James Calleri, Paul Davis, and Dilip Shankar is wonderful as it includes some appearances and small roles from William Mapother as a preacher Dr. Gray meets in India, Cara Seymour as a doctor/researcher Dr. Gray and Karen meet in the second half as it relates to their child, Venida Evans as a diary farmer Dr. Gray meets in Boise, and Kashish as a young girl Dr. Gray meets in India. Archie Panjabi is fantastic as Priya Varma as a community center head in India who helps Dr. Gray find a girl that has this unique eye pattern while being someone who asks him rational questions on spirituality. Steven Yeun is superb as Dr. Gray’s research partner Kenny who would provide many connections as well as create a database for Dr. Gray in his research.

Astrid Berges-Frisbey is amazing as Sofi as this beautiful young woman Dr. Gray falls for where she provides something that is exotic but also challenges him into questions of spirituality. Brit Marling is brilliant as Karen as Dr. Gray’s lab assistant who would help him in finding the research and eventually become his wife where she would get him to take the next big step into his research that would lead him to India. Finally, there’s Michael Pitt in an excellent performance as Dr. Ian Gray as a graduate student/scientist who is trying to see if there is something to the evolution of the human eye as he copes with falling in love and later more questions about everything as well as there is a chance to disprove the ideas of faith.

I loved this movie, it was one of my favorites the year it came out. The cast is great and I like Cahill's previous films. It also made me severely depressed that I don't have 20K in my savings account like they did, apparently. When he bought all those billboards.

I really want to see this but it's not on Netflix and you can only buy it on Amazon. It does sound fascinating from the trailer, glad to hear it delivers.

@Brittani-It was better than I thought it would be as I actually think it's a better film than After Earth as I was just entranced by this. I don't think there's a wrong career path, unless you're Donald Trump.

@ruth-I recorded the film as I think it was on HBO or Cinemax as I think it's available on one of their demand sites or something.