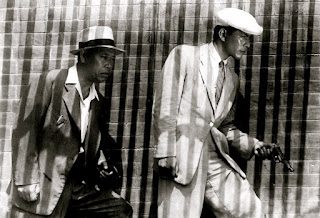 Directed by Akira Kurosawa and written by Kurosawa and Ryuzo Kikushima, Nora Inu (Stray Dog) is the story of a young detective who goes on a search to find his gun after a pickpocket stole with the help of a veteran detective. The film is a precursor to the buddy-cop film with a mixture of film noir as it relates to two men stumbling into a criminal circuit that involves guns and theft. Starring Toshiro Mifune, Takashi Shimura, Keiko Awaji, and Isao Kimura. Nora Inu is a riveting and provocative film from Akira Kurosawa.

Set in a very hot summer in rural areas of Tokyo, the film revolves around a young detective whose Colt pistol had been stolen by a pickpocket where it would be used in a series of shootings prompting him to team up with a veteran detective to find the pickpocket. It’s a film that is a bit of a mystery-suspense film but it’s also a film that is about these two men taking on a case as they’re very different in terms of experience and determination. The film’s script by Akira Kurosawa and Ryuzo Kikushima doesn’t just dwell into what is at stake but also a young detective’s folly and his desire for redemption as he felt he screwed things up.

During the course of the investigation, the detectives in Murakami (Toshiro Mifune) and the experienced Sato (Takashi Shimura) go through Tokyo as well as talk to those who might be involved where things become very complicated. The script also showcases a growing sense of immorality in the modern world as those who are connected to the suspect reveal their attempts to be good but are forced to do things to survive in a world that is becoming very cruel. The way the mystery and search for the pickpocket slowly unfolds but the payoff is very fulfilling in terms of its dramatic effect as it relates to those that Murakami and Sato meet and why they’re intrigued to go into the world of crime.

Kurosawa’s direction is quite intriguing for the way he takes this simple story and stretch it out into something that becomes more than it actually is while not losing sight of that simple scenario. Set largely in parts of rural, post-war Tokyo where a lot of the buildings are seen in the stages of being repaired or in ruins. The film has this look and feel of Japan changing into something that is a modern world as there is a key sequence during a baseball game as it plays into that awareness of a modern world that feels vital and vibrant which is in sharp contrast to the rural areas in Tokyo that is struggling to keep up with the changes as it’s something both Murakami and Sato are also dealing with but can adjust to the changes but it’s the growing sense of immorality that is troubling them.

Kurosawa’s approach to wide and medium shots are entrancing as it says a lot into the sense of a world that is changing but also into the look of the rural locations in Tokyo. Kurosawa’s compositions would play into that growing sense of immorality looming over modern, post-war Japan but also in the way it says into the growing conflict within Murakami who feels like he had done something wrong when he had his pistol stolen. Kurosawa’s approach to suspense in the third act where Murakami would finally catch the man who had been using the pistol for the shootings is among one of the key sequences in the film as it is also one of the most chilling. Especially into what is at stake and the hope that Murakami can bring to ordinary people in a world that is very corrupt where Kurosawa’s usage of slanted camera angles and close-ups come into play for that sequence. Overall, Kurosawa creates a compelling yet gripping film about two detectives trying to catch a thief through rural Tokyo.

Cinematographer Asakazu Nakai, with lighting by Choshiro Ishii, does excellent work with the film‘s black-and-white photography from the usage of natural lights for many of the film‘s daytime interior/exterior scenes as well as some stylish lights and moods for some scenes at night including a key scene set during the rain. Editors Toshio Goto and Yoshi Sugihara do brilliant work with the editing with its stylish usage of transition wipes as well as some rhythmic cutting that play into some of the film‘s suspenseful moments. Art director So Matsuyama does nice work with the look of the police station that Murakami and Sato work at as well as the places including the home of a suspect. The sound work of Fumio Yanoguchi is superb for not just for the atmosphere that is presented in some of the clubs and in the baseball park but also in the quieter moments in the film that says a lot for its suspense. The film’s music by Fumio Hayasaka is fantastic for its somber orchestral music that plays into the drama while the soundtrack features a lot of the orchestral-pop music of the times.

The film’s wonderful cast include some notable small roles from Minoru Chiaki as a clubhouse director, Ichiro Sugai as a hotel owner, Gen Shimizu as the chief inspector, Eiko Miyoshi as a girl’s mother who learns who her daughter has been hanging around with, and Keiko Awaji in a superb performance as a showgirl named Harumi who knows about the thief where she represents that conflict of morality that looms throughout Japan. Isao Kimura is excellent as the small-time thief known as Yusa who is a key major suspect in not just stealing Murakami’s pistol but also being the one to use it in the mysterious shootings.

Takashi Shimura is phenomenal as Detective Sato as an elderly yet experienced detective who aids Murakami in finding the gun while being this sort of man that can guide Murakami into what it means in being a detective as it is one of Shimura’s definitive roles. Finally, there’s Toshiro Mifune in a remarkable performance as Detective Murakami as this young detective dealing with the humiliation in having his gun stolen while trying to redeem himself in front of his colleagues as it’s a performance of sensitivity and humility that often isn’t seen from Mifune who also brings in a determination into his role while having great rapport with Shimura.

Nora Inu is a marvelous film from Akira Kurosawa that features top-notch performances from his regular actors in Toshiro Mifune and Takashi Shimura. The film isn’t just an engaging detective film but also an intriguing study into two men dealing with a changing world set in post-war Tokyo where morals are starting to be pushed aside in favor of survival due to the eerie environments they live in. In the end, Nora Inu is an incredible film from Akira Kurosawa.

I think I mentioned before that I need more Kurosawa in my life. Going to have to make a point of digging into his filmography. The Seven Samurai and Rashomon are both marvelous, so there's no reason I shouldn't.

The ones I would go into that I feel are essential aside from those 2 are in the following: Ikiru, Throne of Blood, High & Low, Yojimbo, Sanjuro, The Bad Sleep Well, Red Beard, Kagemusha, and Ran.

At this point, I'm nearly 2/3s finished with his entire body of work. If there comes a point where I get the 2 Eclipse box set series of his early work and his later work on DVD (and hopefully be on TV). Expect a multi-part Auteurs series on Kurosawa coming in a few years.

Overall I really liked "Stray Dog". You can see Kurosawa still playing around with some scene set ups and working with lighting. He does some great stuff in this movie. But I feel it is strong at the start and the end of the movie. I found the middle portion sagged a little bit and felt like it could have been a bit tighter in the way the narrative flowed. There are a few too many montages in the movie for example. And the baseball scene is important, but it feels like it goes on too long. But those small criticisms aside, I really like the characters in this movie and when it is cooking it really cooks. In some ways it feels like a precursor to "High and Low", which also sagged a bit in the middle, but had a very strong opening and ending.

@roman J. Martel-There were things that did feel too long but I think it was part of what helped build the suspense and the relationship between Shimura and Mifune. It is still a phenomenal film. I have now, 12 (14 if you count a documentary and a film that many say isn't a Kurosawa film) films to see and hopefully complete his body of work.