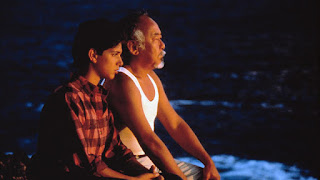 Directed and co-edited by John G. Avildsen and written by Robert Mark Kamen, The Karate Kid Part II is the sequel to the 1984 film as Mr. Miyagi returns home to Okinawa to see his ailing father while being accompanied by his student Daniel LaRusso where they deal with an old enemy and his brutish nephew. The film is a continuation of a father-son bond of sorts between Miyagi and LaRusso as they’re once again respectively played by Noriyuki “Pat” Morita and Ralph Macchio. Also starring Nobu McCarthy, Tamlyn Tomita, Danny Komekona, Yuji Okumoto, and Martin Kove as John Kreese. The Karate Kid Part II is a heartfelt and thrilling film from John G. Avildsen.

Set six months after the events in the first film, Kensuke Miyagi receives news from his home island of Okinawa in Japan that his father is dying as he decides to return home. With his student/friend Daniel LaRusso wanting to accompany him as an act of gratitude, the two deal with Miyagi’s own past actions as they’re confronted by an old friend of Miyagi who has a legitimate grudge towards him over a woman Miyagi wanted to marry. Adding that troubling turmoil is the man’s nephew who targets LaRusso where LaRusso realizes the concepts of honor is very different in Japan than in America where he tries to maintain the idea of what is right. Robert Mark Kamen’s screenplay doesn’t just explore the concept of honor but also cowardice as the latter is something Miyagi is accused of from his former friend Sato (Danny Komekona) who was also a student of Miyagi’s father.

Miyagi tries to settle matters with Sato without violence but things don’t work out so well easily where Miyagi’s home village and its villagers are also being targeted for Miyagi’s refusal to fight. Adding to the complications is Sato’s nephew Chozen (Yuji Okumoto) who is quite corrupt and has a very distorted view of honor. While LaRusso does admit that he finds Chozen intimidating, he doesn’t back down knowing that Chozen is driven by profit and intimidation where LaRusso finds a way to get the upper hand and fight another day. The script doesn’t just explore the dire situations both Miyagi and LaRusso are in but also their own relationship as LaRusso helps his mentor cope with loss while getting to know Okinawa. It’s a world LaRusso would embrace despite his encounters with Chozen as it is among the highlights though the elements of romance that involve LaRusso falling for a young woman named Kumiko (Tamlyn Tomita) isn’t entirely successful as it feels like an attempt to give LaRusso something else to do.

John G. Avildsen’s direction is quite straightforward for the way he portrays these two different worlds of Southern California and Okinawa as the latter was actually shot on Oahu, Hawaii with a cast of Okinawan-born actors or those of Okinawan descent to give the film an authentic feel. While the film opens with a sequence that picks up where the last film left off as it involves an antagonist from that film in John Kreese. It does open the film with a bang as it gives audience that confrontation between Miyagi and Kreese but in a way that is unexpected. The film then shifts to six months after that moment where the main narrative takes place as Avildsen’s compositions for the scenes in Southern California are straightforward while many of the scenes set in Okinawa are quite rich and entrancing. There are also these moments that are very intimate in some of the romantic elements between LaRusso and Yukie but it feels very underdeveloped. The moments where LaRusso is confronted by Chozen are very engaging with the usage of low camera angles where the latter is often dominant but LaRusso does find a way to fight back as it does lead to this very intense climax where the two fight as it is about honor and what is right. Overall, Avildsen creates an exciting though flawed film about a man and his student dealing with sins as well as loss and the idea of honor.

Cinematographer James Crabe does brilliant work with the film‘s cinematography in the way Okinawa looks in day and night in its exteriors along with the usage of shadows for some of the scenes set at night including the rainstorm sequence. Editors John G. Avildsen, David Garfield, and Jane Kurson does nice work with the editing as it is largely straightforward with some rhythmic cuts for some of the film‘s action and fight scenes. Production designer William J. Cassidy, set decorator Lee Poll and art director William F. Matthews, does amazing work with the look of homes set in Okinawa as well as some of the places in its towns.

Costume designer Mary Malin does terrific work with the costumes as it‘s mostly casual along with the look of the Japanese robes that many of the local Okinawans wear. Sound editor Tom C. McCarthy does superb work with the sound in capturing the intensity of the storm in the rainstorm sequence along with some raucous moments in a dance club scene as well as sparse moments in the fights. The film’s music by Bill Conti is excellent for its mixture of orchestral-based music with some traditional Japanese-based string instruments and woodwinds to play into some of the romantic and traditional Japanese elements while music supervisor Brooks Arthur creates a soundtrack filled with pop and rock pieces from New Edition, the Moody Blues, Dennis DeYoung of Styx, Carly Simon, Paul Rodgers, Southside Johnny, and the film’s love theme The Glory of Love by Peter Cetera.

The casting by Caro Jones is great as it features some appearances and small roles from Clarence Gilyard as an army soldier at an Okinawan bar, Ron Thomas and Rob Garrison respectively reprising their roles as former Cobra Kai students Bobby and Tommy, William Zabka as the top Cobra Kai student Johnny who is being choked to death by Kreese, Charlie Tanimoto as Miyagi’s ailing father, Joey Miyashima and Marc Hayashi as Chozen’s goons, and Martin Kove in a superb performance as John Kreese who gets himself into a disastrous confrontation against Miyagi. Danny Kamekona is excellent as Miyagi’s old friend Sato who has a grudge towards Miyagi and wants to fight him really bad where also controls the village that Miyagi lived in. Nobu McCarthy is fantastic as Miyagi’s old flame Yukie who was the source of Sato’s falling out with Miyagi as she had been taking care of Miyagi’s father while catching up with Miyagi on old times.

Yuji Okumoto is excellent as Sato’s nephew Chozen as a man who does his uncle’s bidding but also is very corrupt in the way he cheats villagers where he would antagonize Daniel over his distorted view of honor. Tamlyn Tomita is wonderful Yukie’s niece Kumiko who introduces Daniel to the world of Okinawan culture as she would later fall for him though the way some of the romance is handled is very clunky and cheesy. Noriyuki “Pat” Morita is amazing as Miyagi as a man who returns to his home island to see his dying father as he copes with accusations of cowardice by his old friend Sato as well as trying to protect his village from Sato and his nephew. Finally, there’s Ralph Macchio in a brilliant performance as Daniel LaRusso who accompanies Miyagi to Okinawa as an outsider as he deals with Chozen’s antagonistic attitude where he knows he’s being out-skilled and out-matched but wouldn’t back down.

I do like this one, but haven't revisited it in a lot of years. Probably need to change that. For me, Mr. Miyagi's story has always been more interesting than Daniel's. It helps that Pat Morita absolutely kills it in both movies.

It's been on Starz/Encore as of late as I saw bits of it which prompted me to write a review of this film and the third film (which I'm finishing up right now) as I do like this one. Especially as I felt Miyagi's story is far more interesting than Daniel's though I think his character progression in the 2nd film is interesting despite the love story aspects which I'm not fond of entirely.