Against the Crowd Blog-a-thon 2016 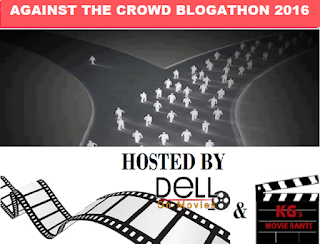 Last year, Wendell of Dell on Movies created a blog-a-thon that is about defending movies that don’t get a lot love and trash those that do. It was a unique concept last year that I participated in with my piece as it was a lot of fun. This year, Wendell is hosting the blog-a-thon again with Kgothatjo Magolego of KG's Movie Rants. Here are the rules:


1. Pick one movie that "everyone" loves (the more iconic, the better). That movie must have a score of at least 75% on rottentomatoes.com. Tell us why you hate it.

2. Pick one movie that "everyone" hates (the more notorious, the better). That movie must have a score of less than 35% on rottentomatoes.com. Tell us why you love it.

5. Comment on this post, or on KG's Movie Rants with the two movies you intend on writing on.


Here is what I’m offering: 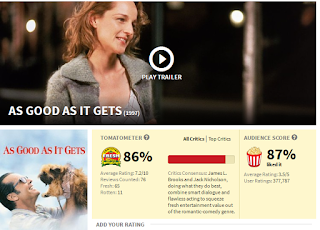 James L. Brooks is known for not just warm and sentimental comedy-dramas like Terms of Endearment and Broadcast News as the latter is a film that I actually like. The rest of his work however isn’t very good. I don’t think very highly of Terms of Endearment while Spanglish and I’ll Do Anything are mediocre and How Do You Know is just shit. Then there’s As Good as It Gets that is loved by many as it won Jack Nicholson and Helen Hunt Oscars. Why would a film that a lot of people love be in this blog-a-thon? Well, here’s why.

It’s an overrated and sappy film that has Jack Nicholson not really doing much but play an exaggerated version of himself with OCD and then fall in love with some dog while Helen Hunt is just absolutely bland in this. How these two won Oscars for very lame performances is beyond me as Peter Fonda should’ve won the Best Actor Oscar for Ulee’s Gold while the Best Actress award could’ve gone to either Julie Christie for Afterglow or Kate Winslet for Titanic. It’s overly-long and doesn’t have any great visuals as it’s really just one of the most overrated film of the 1990s. 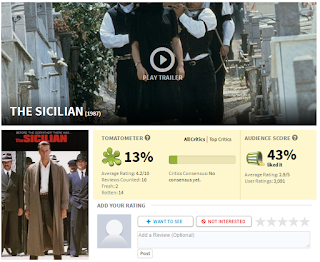 Now here’s a film that didn’t get its due in its initial release nor was it shown to a wide audience in the U.S. in the preferred 146-minute director’s cut by Michael Cimino. Given the fact that Cimino was still stinging from the undeserved notoriety he got over 1980’s Heaven’s Gate where he would make four more films until 1996 and never make a feature film ever again as he recently passed away in July of 2016. It’s a shame considering that in recent years that Heaven’s Gate as well as 1985’s Year of the Dragon had been given some re-evaluation with the critics. His 1987 bio-pic on the Sicilian bandit Salvatore Giuliano is an unconventional film that bears a lot of the visual motifs that Cimino is known for as it is clear he is inspired by some of the Italian epics of the 1950s/1960s like Luchino Visconti’s The Leopard. It is a flawed film as Christopher Lambert’s performance is kind of all over the place but it is this fascinating film that explores a man trying to help Sicily in the late 1940s/early 1950s in an attempt to liberate the land from Italy.

The supporting cast that includes Joss Ackland, Richard Bauer, and John Turturro help elevate the film as it explores this idea of old vs. new which is a recurring theme in Cimino’s work. Though Gore Vidal’s script doesn’t put much development into the women characters as well as emphasize a bit on camp. It does help play into the many conflicts that Giuliano would endure as he would even receive help from those he try to defy as it is about the common goal to free Sicily from Italy. More about the film can be explained in this review of the director’s cut of the film as the version that was panned largely by American critics that appear on Rotten Tomatoes is the 115-minute theatrical cut. The director’s cut version of the film is the preferred version as it’s one that audiences need to seek out and give it another chance just like Heaven’s Gate did in recent years.

I haven't seen The Sicilian, but I'm mostly with you on As Good As It Gets...the film itself is just...bland. Nicholson does nothing but be himself and a very poor variation of it, but I adore Hunt here. I find her incredibly real, raw and moving in the film. In fact, she's the only aspect of the film I look back at fondly.

I'm completely with you on that trash heap that is As Good As It Gets. What a dreadful film. I was bored throughout and thought most of the performances were crap. I like Greg Kinnear but his character was a pathetic sketch of a person. Just thinking about Nicholson and Hunt winning for these nothing performances makes me mad. Agreed that Peter Fonda should have taken the Actor Oscar and while my preference would have been Judi Dench in Mrs. Brown any of the other four nominated women deserved the award more than Hunt.

Haven't seen The Sicilian but if I get a chance to see the director's cut I'll give it a go. As far as Heaven's Gate goes it wasn't as bad as its reputation made me fear it would be but I did find it static and overlong. Beautiful cinematography and the skating dance scene was very cool but pretty pictures and one excellent scene does not a good film make.

Haven't seen either. Completely avoided As Good As It Gets after my sister saw it and told me she was bored to tears. Sounds like I made a wise choice. I need to see The Sicilian. Thanks for doing this again.

@Fisti-Helen Hunt I think is overrated as an actress though I did like her in The Sessions.

@joel65913-Have you seen the 2012 restoration version of Heaven's Gate? It does improve the picture greatly even though it is flawed. I've grown to like it even more. As for The Sicilian. The two-hour theatrical cut is kind of a mess but the director's cut version is the more definitive while it is still flawed but certainly worth a look.

@Wendell-You're welcome. The Sicilian is currently available on Blu-Ray and it's the director's cut as I really think people should check it out. If you ever watch the documentary on the Z Channel in Z Channel: A Magnificent Obsession, F.X. Feeney talked about being one of the few critics who liked The Sicilian in both cuts yet was the one championing its director's cut as Michael Cimino thanked him for the praise.

I'm actually the opposite to you, I liked As Good As it Gets but wasn't keen on Broadcast News. It seems Michael Cimino spent a lot of his time being screwed over by the studios cutting/demanding cuts to his films.

@Myrela-Well, when you make a film that shut down a studio. It's likely that kind of notoriety will fuck you over no matter how hard you try to play nice as it's a shame considering that Michael Cimino never got another chance to redeem himself despite the fact that some of his films have been getting a fair re-evaluation.

I haven't seen either of these movies but I've been long meaning to see As Good As It Gets because I've heard Greg Kinnear's performance is fantastic. I think I'll hold off on watching it after reading this.

Thanks for contributing to the madness.
KG

Oh, you got me curious about The Sicilian now. I like a few films that got a horrible rating, but dislike those that are considered critical darlings. I enjoyed As Good as It Gets but I didn't love it, not surprised anything Jack Nicholson did is automatically rated highly.

@Kgothajo Magolego-Greg Kinnear is an underrated actor. He's OK in As Good as It Gets but he's a lot better in other films. I recommend seeing him in Fast Food Nation and Auto-Focus.

@ruth-I love Jack Nicholson when he is given something substantial and doesn't do anything that feels forced, contrived, or with a sense of vanity which is a lot of the films he did in the 70s. In As Good as It Gets, it's just horrible as there is this smugness in the acting where he's not really doing anything at all but play an exaggerated version of himself of the worst kind. He's not being challenged the same way people like Alexander Payne or Sean Penn did in recent years. As for The Sicilian, make sure it's the 146-minute cut of the film which I think is the version to see.

I'm with you on As Good As It Gets, that film was so vanilla. How did they win Oscars? Wtf was that? I've never seen the other one though.

@Brittani-I don't know. It's the kind of bullshit Oscar-bait films that Oscar voters jack off too and I'm like "this is better than Boogie Nights?" You won't even find that film in my best of 1997 list. As for The Sicilian, it rarely gets played on TV and you're lucky if you see it on TV though the version that is shown on TV is the theatrical cut while the 146-minute director's cut just came out on Blu-Ray.