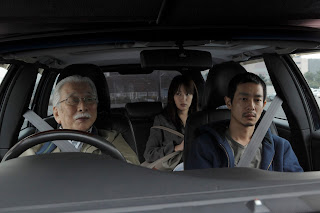 Written and directed by Abbas Kiarostami, Like Someone in Love is the story of a sociology student who works as a part-time prostitute where she befriends an elderly client who is more interested in helping her rather than have sex with her. The film is a simple tale of a growing bond between a young woman and an old man as they deal with life as well as the choices they make. Starring Rin Takanashi, Tadashi Okuno, and Ryo Kase. Like Someone in Love is a rapturous and entrancing film from Abbas Kiarostami.

Told in the span of nearly a day in Tokyo, the film revolves around a student who works part-time as a call girl where she visits an elderly client who would treat her kindly as she is going through personal issues relating to her fiance`. It’s a film that is a very simple story about a young woman meeting with an old man as she is reluctant to do a job as she is also dealing with a lot of things yet is amazed by this old man’s kindness and generosity. Abbas Kiarostami’s screenplay doesn’t rely very much on plot but rather the development of a growing friendship between this old professor and this young woman as they spend a day together. Especially as the old man Takashi (Tadashi Okuno) is helping out the young woman Akiko (Rin Takanashi) who is a sociology student and hasn’t told her fiance Noriaki that she works as a call girl as he is jealous as well as very possessive.

Kiarostami’s direction is very ravishing for not just its simplicity but also in creating something that is just filled with so much in the frame. The opening sequence inside a restaurant has Kiarostami having Akiko talking but she’s not in the frame as if it’s someone else there and then it cuts to a reverse shot of her talking to a friend. Much of it has Kiarostami employ not just long takes but also compositions that are simple with its medium shots and close-ups as well as these gorgeous shots of a car moving as its windows reflect everything it shows. The scenes between Takashi and Akiko such as their first meeting is one that is very light-hearted as well as some of the scenes in the car as it would include this intimate yet fascinating conversation between Takashi and Noriaki.

Kiarostami’s approach to framing does have this air of beauty in the image as well as how he positions the camera into the exterior of Takashi’s home and how it is shot in the inside. Even as it help create that restrained sense of drama as it helps build this fascinating relationship between Takashi and Akiko. The direction also maintains that sense of quietness where it just captures that air of realism but also something unexpected which does play into the drama. Overall, Kiarostami creates a touching yet riveting film about a call-girl befriending an elderly professor.

Cinematographer Katsumi Yanagijima does amazing work with the film‘s cinematography to capture the nighttime beauty of the exteriors in Tokyo as well as some of the scenes set in the day as it maintains something that is natural. Editor Barman Kiarostami does excellent work with the film‘s editing as it is very straightforward with a few rhythmic cuts to play into some of the drama. Sound editor Nobuyuki Kikuchi and sound designer Mohamadreza Delpak do fantastic work with the sound in capturing the air of realism in the way cars sound as well as what goes on in and out of a room or in a location.

The casting by Tsuyoshi Sugino is great as it features some notable small roles from Kaneko Kubota as Akiko’s grandmother, Koichi Ohori as the cab driver, Mihiko Suzuki as Takashi’s neighbor, Reiko Mori as a friend/fellow call-girl of Akiko, Hiroyuki Kishi as a former student of Takashi, and Denden as an old friend of Takashi who is also a pimp of sorts for Akiko. Ryo Kase is amazing as Akiko’s fiance Noriaki as this very obsessive man who wonders what is Akiko is doing as he continuously confronts her while getting some advice from Takashi thinking he’s Akiko’s grandfather. Tadashi Okuno is incredible as Takashi as a former college professor who is intrigued by Akiko as well as being someone that is willing to help her as he displays that great sense of kindness. Finally, there’s Rin Takanashi in a remarkable performance as Akiko as this young sociology student who is trying to make money to cover her student debts while lamenting over her grandmother and issues with Noriaki.

The 2014 Region 1/Region A dual-format DVD/Blu-Ray release from the Criterion Collection presents the film in its original 1:66:1 aspect ratio 3.0 surround DTS-HD master audio soundtrack for the Blu-Ray release as it’s all supervised by Abbas Kiarostami. The special features on both discs feature the film’s theatrical trailer as well as a forty-seven minute making-of documentary on the film. The documentary showcases Kiarostami’s approach to filmmaking and his views on storytelling as well as emphasizing more on rehearsal rather than shoot in the moment. The film also features interviews with Kiarostami and some crew members as well as how Kiarostami is able to direct the actors despite the fact that he doesn’t speak Japanese as he is aided by a translator. It’s a fascinating documentary short that explores what Kiarostami was doing as well as why he prefers digital over 35mm film.

The DVD/Blu-Ray set also features a booklet that includes an essay by film professor Nico Baumbach (brother of filmmaker Noah Baumbach) entitled On Likeness. The essay discusses several of Kiarostami’s motifs as a filmmaker as well as some of themes he had explored with his other films. Baumbach also talks about some of the plot elements in the film as well as some of the moral themes that Kiarostami would explore. Baumbach also suggests a lot of interpretations into the story as well as it’s ending as it is one of the most shocking. It’s a fascinating read that serves as a great accompaniment to the DVD/Blu-Ray set.

Man I have such a huge blindspot on the late Abbas Kiarostami. The premise of this intrigues me, I also don't watch as much Asian cinema as I should.

This is kind of a different film from Kiarostami as it's one of 2 films that he made outside of Iran yet as a final film. This is definitely a good way to go out. I'm just bummed he's gone now as I don't think he was even finished. I think you should have Kiarostami film as a Blind Spot for next year. I'd suggest Close-Up which is my favorite film of his so far.