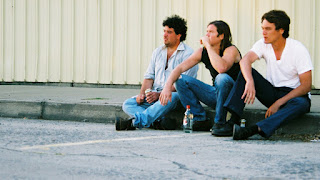 Written and directed by Jeff Nichols, Shotgun Stories is the story of two sets of half-brothers who embark on a feud following the death of their father. The film is an exploration of a group of brothers who are down on their luck as they go into a battle against another group of brothers that eventually escalates into tragedy. Starring Michael Shannon, Barlow Jacobs, Douglas Ligon, and Glenda Pannell. Shotgun Stories is a riveting and intense film from Jeff Nichols.

Set in a small town in Arkansas, the film revolves around two sets of half-brothers whose father has died as one group is in mourning but the other half in three brothers don’t have kind things to say about their father as a feud begins to occur. It’s a film that is essentially about a family feud where three men still bear scars of abuse and torment from their father as well as being raised by their mother to hate their half-brothers who have a more fulfilled life. For the trio of the eldest Son (Michael Shannon), the middle-child Boy (Douglas Ligon), and the youngest in Kid (Barlow Jacobs), they’re just struggling to live day-by-day as well as cope with trying to succeed as well as the resentment of having their father abandon them as kids to start another family.

Jeff Nichols’ screenplay doesn’t just explore much of that sense of resentment that carries around Son, Boy, and Kid, but also their lives as they’re estranged from their mother Nicole (Natalie Canderlay) who had also been abusive towards them as well. The lives of the three brothers are just as complicated as Son is going through a separation from his wife Annie (Glenda Pannell) due to his gambling habit while Boy and Kid live with him as they don’t have a home to go to. Boy is a middle-school basketball coach struggling to get by while Kid works with Son at a fish farm as he also hopes for a raise so he can marry his girlfriend Cheryl (Coley Campany). Their encounters with their half-brothers led by the eldest Mark (Travis Smith) eventually gets ugly where it becomes not just violent but also escalates into some very dark territory.

Nichols’ direction is quite entrancing in its simplicity as it is shot largely on location in small towns in Arkansas with some of it shot in its capital Little Rock. With its usage of wide and medium shots, Nichols creates something that plays into a small world as well as being very beautiful in the fact that it is a small town where people kind of know each other. Yet, it is shaken by this growing tension between two sets of half-brothers as it’s boiling to a breaking point. Nichols’ usage of close-ups add to the intimacy as well as how close the relationship of the brothers are as it is about protecting each other. The direction also has Nichols create that air of suspense but also a sense of unease in the way the drama unfolds as it has these scenes where it is about the brothers trying to live their lives and then get into an ugly encounter with their half-brothers where it would escalate into tragedy that would nearly destroy a family that don’t like each other at all. Overall, Nichols creates a rapturous yet eerie film about two sets of half-brothers engaging themselves into a dangerous feud.

Cinematographer Adam Stone does brilliant work with the film‘s cinematography from the lush look of the scenes set to the sunlight for some of its exteriors to the usage of lights and low-key lights for scenes at night interior and exterior. Editor Steven Gonzales does excellent work with the editing with its stylish of dissolves and transitional fade-outs as well as some rhythmic cutting for the drama and suspense. Sound editor Jerry Gilbert does nice work with the sound from the way Boy‘s radio would pop up music every now and then to some of the quieter moments in the film that play into the drama and suspense. The film’s music by the bands Pyramid and Lucero is amazing for its mixture of melodic dream-pop with bits of country texture to play into the suspenseful moments of the film as well as the atmosphere of the South.

The casting by Yancey Prosser is fantastic as it include some notable small roles from G. Alan Wilkins as a town eccentric who is a friend of Kid, Coley Campany as Kid’s girlfriend Cheryl, Lynsee Provence and David Rhodes in their respective roles as the young brothers Stephen and John who hate Son and his brothers, Cole Hendrixson as Son’s child Carter, and Natalie Canderlay as the estranged mother of Son, Boy, and Kid who doesn’t seem fond of her sons as well as not really care about the trouble she put them in. Glenda Pannell is wonderful as Son’s wife Annie who has separated from him due to his gambling habits while dealing with the chaos of the feud. Travis Smith and Michael Abbot Jr. are excellent in their respective roles as Mark and Cleaman Hayes as the two eldest half-brothers who are part of the feud with the former being the one to push things and the latter trying to stop it.

Barlow Jacobs is superb as Kid Hayes as the youngest of the three brothers who is trying to deal with the expectations of adulthood as well as do what is right for his girlfriend Cheryl as he hopes the raise will give her an engagement ring. Douglas Ligon is brilliant as Boy Hayes as middle school basketball coach who lives in his van and has a dog who is trying to deal with his own faults in his life and wonder if he can turn things around. Finally, there’s Michael Shannon in an incredible performance as Son Hayes as a man who works at a fishing farm that is doing what he can to prove himself to his wife as well as cope with the presence of his half-brothers whom he dislike along with the feud he’s gotten himself into as it becomes out of control.

Shotgun Stories is a phenomenal film from Jeff Nichols. Featuring a great cast, gorgeous imagery, an evocative score, and a gripping story of brotherhood and family feuds. It’s a film that explores men dealing with demons as well as the hatred they have towards another group of men who were given the things they never had as children. In the end, Shotgun Stories is a sensational film from Jeff Nichols.

I'm so glad you liked this! I loved it as well, as I have all of Nichol's movies. I'm finally going to get to watch Midnight Special tonight.

Sweet. I hope you enjoy Midnight Special as now having seen everything he's done so far with the exception of Loving. He's pretty much hitting a 1000 at the moment and not slowing down. He is an incredible filmmaker and this is the film that proves it.

Haven't seen this one, yet, but it sounds great - especially with Shannon in it.

@Wendell-The collaboration between Michael Shannon and Jeff Nichols is pretty much gold. It's definitely on its way to being one of the best actor-director collaborations ever.

So it seems Michael Shannon has been in every single Jeff Nichols film. This is one by Nichols I still need to see!

@ruth-Pretty much. He has a small role in Mud and a small part in the upcoming film Loving.

Yes I can't wait to see 'Loving.' Hopefully his role is bigger than in MUD.

@ruth-I heard it's a supporting role so at least he's in the film no matter how small the role is.

So glad to see someone talking about this film. It is such a good movie. I hoping as Nichols gets more attention that more people will seek this gem out.

@keith71_98-Same here. It is a damn good movie and certainly a film more people need to check out. I think Jeff Nichols is already becoming one of the best filmmakers working right now and certainly what American cinema needs.