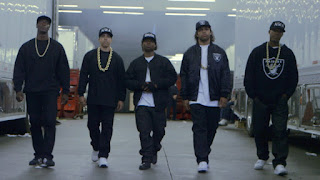 Directed by F. Gary Gray and screenplay by Jonathan Herman and Andrea Berloff and story by Berloff, S. Leigh Savidge, and Alan Wenkus, Straight Outta Compton is the story about the formation and rise of the legendary hardcore hip-hop group N.W.A. (Niggaz with Attitude) who created controversy through their music as it spoke about life in the ghettos of Compton near Los Angeles, California. The film is a dramatic take on the group’s story from their early years to the death of one of their founders in Eric “Eazy-E” Wright of AIDS in 1995. Starring O’Shea Jackson Jr., Corey Hawkins, Jason Mitchell, Aldis Hodge, Neil Brown Jr., and Paul Giamatti as Jerry Heller. Straight Outta Compton is a gritty yet intense film from F. Gary Gray.

In the late 1980s, N.W.A. emerged from the Los Angeles-based ghettos of Compton where they released their breakthrough album Straight Outta Compton that featured no-holds-barred lyrics on life in the ghetto, violence, racial tension, and run-ins with the LAPD whom they have a very testy relationship with. The group that featured Andre “Dr. Dre” Young (Corey Hawkins) O’Shea “Ice Cube” Jackson (O’Shea Jackson Jr.) Eric “Eazy-E” Wright (Jason Mitchell), Lorenzo “MC Ren” Patterson (Aldis Hodge), and Antoine “DJ Yella” Carraby (Neil Brown Jr.) weren’t afraid to be controversial while also took criticism where they were accused of being misogynistic which wasn’t entirely true. Despite their success, the group would fall apart not just due to mismanagement but also other things that led to Ice Cube and Dr. Dre to eventually have very successful solo careers while Eazy-E would run Ruthless Records until his death in 1995 of AIDS.

The film’s screenplay does play into some dramatic liberties and does play with some of the timeline as much of the film is told in the span of an entire decade from 1986 to Dr. Dre‘s departure from Death Row Records in 1996. It does help tell the story of the group’s formation as well as what lead to them falling apart just as they were becoming very successful. Eazy-E is first seen as a crack dealer trying to survive as well as living in the ghetto where houses are often being destroyed by the LAPD while Dr. Dre and DJ Yella are part of a group known as the World Class Wreckin’ Cru where they’re frustrated by playing music they don’t like. One of Dre’s friends in Ice Cube would get a chance to rap where it would give Eazy and his friend MC Ren some ideas about forming a group and make a song that would become Boyz-n-the-Hood that led to them being discovered by music industry veteran Jerry Heller (Paul Giamatti) to manage them and help Eazy for the label Ruthless Records.

Heller would be the man to not only make N.W.A. successful but would also cause the seeds of its dissolution once Ice Cube begins to raise questions about money and contracts that led to his departure in late 1989 and Dre‘s own departure in 1991 with the aid of a former bodyguard in Suge Knight (R. Marcos Taylor). While the script doesn’t give members like MC Ren and DJ Yella much to do other than be supporting players as it’s more focused on Dre, Cube, and Eazy. It does also play into the diverging directions the three would endure in the course of the story as well as the controversy they had to carry in their lives. The third act isn’t just about post-N.W.A. life for the three but also the attempt to reform the group just as everyone is growing up.

F. Gary Gray’s direction does have some air of style in the way the film opens as it establishes not just life in Compton but also this world where the LAPD will do things to establish their authority regardless if anyone did anything wrong. It is an inventive opener as it play into the world of the ghettos where Gray shot the film on location in Compton as well as parts of Los Angeles and other cities in California. It’s a world that is quite chaotic but also exciting where Gray would use some wide and medium shots to play into the look of the town as well as some of the other areas in Los Angeles. Yet, Gray maintains an intimacy as it play into these characters trying to deal with the police as well as trying to survive all of the things in the world as well as touring and all of the things that come into the world of success.

The direction doesn’t shy away from the fact that it has women not just acting like groupies and be naked in pool parties as it was part of the world and success N.W.A. had encounter while there would be some female characters that are positive figures for some of the characters. Especially in the third act where Dre, Cube, and Eazy would grow up and go into different directions while they would also endure some of the controversy they encounter as it relate to their music. There is a sequence that is a recreation of 1992 L.A. riots as it play into everything that N.W.A. would foretell in their music as well as Gray plays up that sense of reality as well as some of the struggle that Dre, Cube, and Eazy would go through after N.W.A. that would lead to its attempted reunion. Overall, Gray creates an exhilarating and provocative film about the world’s most dangerous group in popular music.

Cinematographer Matthew Libatique does amazing work with the film‘s cinematography from the usage of different colored lights and schemes for many of the interior scenes at the clubs as well as some of the lighting at night while going for something very natural in the daytime exterior scenes. Editors Billy Fox and Michael Tronick do excellent work with the editing as it has some bits of style while creating some unique rhythms for the intense moments such as the opening sequence. Production designer Shane Valentino, with art director Christopher Brown and set decorators Christopher Carlson and Jeffrey Kushon, does fantastic work with the look of the homes in Compton with its steel bars in the windows as well as the mansions the guys would live in later on as well as the look of the clubs and recording studios. Costume designer Kelli Jones does nice work with the costumes from the clothes that the group wear onstage as well as what they would wear offstage as it‘s mostly casual.

Makeup designer Debra Denson does terrific work with some of the makeup as it relates to the tattoos of some of the characters such as the look of Suge Knight‘s entourage. Visual effects supervisor Bernhard Kimbacher does superb work with some of the visual effects as it‘s mainly bits of set-dressing as well as in some of the recreation of the 1992 LA riots. Sound editors Greg Hedgepath and Mark P. Stoeckinger do brilliant work with the sound to capture the way music is sound in the recording studio and in the clubs as well as the sound of gunfire and such to play into some of the darker moments in the film. The film’s music by Joseph Trapanese is wonderful for its mixture of hip-hop and ambient music to play into culture of the LA ghettos while music supervisors Angela Leus and Jojo Villanueva create a fun soundtrack that features a lot of music from N.W.A., Dr. Dre, Snoop Dogg, 2Pac, Ice Cube, Eazy-E, Parliament-Funkadelic, Roy Ayers, and several other music in the world of hip-hop and R&B.

R. Marcos Taylor is superb as Suge Knight as a former bodyguard who would co-found Death Row Records with Dr. Dre as he is this intimidating and dangerous figure that handled business in a brutal way as he would eventually alienate Dre. Paul Giamatti is fantastic as Jerry Heller as a music industry veteran who would manage N.W.A. and create Ruthless Records with Eazy as he would give the group success but also dissension once money and contracts come into play. Neil Brown Jr. is terrific as DJ Yella as the group’s DJ who would help mix and record much of the music as well as be someone who just loves the ladies. Aldis Hodge is excellent as MC Ren as an emcee who can spit rhymes while being Eazy’s loyal friend before and after N.W.A.

Corey Hawkins is amazing as Dr. Dre as the group’s DJ/emcee who is the musical talent of the group as he would create the music as he would later felt taken advantage by Heller forcing him to leave the group and form an alliance with Knight which he would later regret. Jason Mitchell is brilliant as Eazy-E as the group’s leader who would be a character of sorts for the group as well as the most outgoing as he would also be in charge of their destiny unaware of the chaos he’s causing in the group. Finally, there’s O’Shea Jackson Jr. in an incredible performance as his real-life father Ice Cube as he displays someone who has a lot of talent as a lyricist and as an emcee as he is also suspicious of Heller where he would go solo while dealing with the dark aspects of the music business.

Straight Outta Compton is a remarkable film from F. Gary Gray. Featuring a great cast, a compelling story, and a cool soundtrack, it’s a film that manages to be a fascinating bio-pic despite some of the dramatic liberties it took to tell the story of the world’s most dangerous group. In the end, Straight Outta Compton is a marvelous film from F. Gary Gray.

Really glad you liked this one. Though not 100% accurate, as you pointed out, it is an excellent telling of the NWA story.

I liked this film a lot, even though I know they left out some important stuff and fudged some others. I remember thinking it was kind of long, but then again, I don't know what I would've cut out of it. Every scene felt important. Great review!

@Wendell-As someone that knew the group's history despite not being a fan of hip-hop. I knew what was embellished and what was kind of true as it would usually annoy the hell out of me but this film managed to be compelling enough that I can forgive those dramatic liberties.

@Brittani-There were some things in the film that I knew they left out or cut out as I'm sure the unrated version had more to reveal but I enjoyed the film as a whole. Thank you.