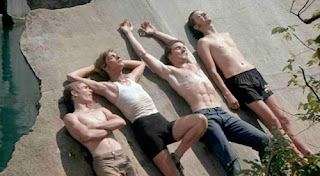 Directed by Peter Yates and written by Steven Tesich, Breaking Away is the story of four young men trying to figure out what to do before they go to college as one of them wants to race against a visiting group of Italian pro bicycle riders in a race. The film is a coming-of-age tale where a young man tries to find himself as he gets help from his friends while wanting to do something that matters. Starring Dennis Christopher, Dennis Quaid, Daniel Stern, Jackie Earle Haley, Barbara Barrie, Robyn Douglass, and Paul Dooley. Breaking Away is a lively and touching film from Peter Yates.

Set in the small town of Bloomington, Indiana, the film revolves around four young men spending their summer bumming around unsure of what to do as one of them has adopted an Italian accent as he is excited about a group of Italian pro bicycle riders coming to Indiana for a local race. It’s a film that revolves around this young man trying to become the best bicyclist he can be yet he would also woo a college girl much to the chagrin of college preppies who have a disdain for the working-class boys as they call them cutters. Along the way, the rest of the guys cope with not just the idea of failure but also wonder if they can ever get out of Bloomington. Steven Tesich’s screenplay isn’t just a sports movie but also this compelling coming-of-age film about four guys trying to figure out themselves as a couple of them were athletes, one of them wants to marry his girlfriend, and another thinks he’s got it figured out by pretending to be Italian only to face some harsh realities.

The film’s protagonist Dave Stoller (Dennis Christopher) is in love with the Italian riders as well as culture where he would speak Italian much to the annoyance of his father Ray (Paul Dooley) while his mother Evelyn (Barbara Barrie) tries to be supportive. Dave’s friends in Mike (Dennis Quaid), Cyril (Daniel Stern), and Moocher (Jackie Earle Haley) are also supportive of Stoller’s ambition but also wonder if he will try and become like these college preppies they despise because they have money and think they’re better than everyone. Tesich’s screenplay also has humor in the way Ray reacts to the antics of his son but it also has moments that are quite touching as it play into Ray’s own previous life cutting stones to create buildings as well as some of the things Dave, Mike, Cyril, and Moocher encounter. Even as Dave would encounter reality of his own as it relates to the Italian racers who would force Dave to realize more about who he is.

Peter Yates’ direction is quite simple as it doesn’t really go for any visual tricks yet it does capture a sense of energy and realism of small town life. Shot on location in Bloomington, Indiana as well as the campus of Indiana University in Bloomington. Yates’ direction utilizes that sense of a world that is quite small but also vast where it has this world of the working class who are just living day-by-day as the four guys would swim at this old limestone quarry to pass the time while miles away would be this campus where the rich preppie college kids are. Yates’ usage of wide and medium shots play into the look of the locations as well as some of the biking scenes where it plays into the scale of the roads as well as the challenge that Stoller has to encounter in the race with the Italians. Yates also uses close-ups and some medium shots to play into the life of Stoller with his parents as well as create moments that are quite comical as it is told very naturally. There is also these somber moments between Stoller and his father late in the film as it play into the ways of the world but it also has these very important life lessons. All of which would lead to this climatic race between Stoller and his friends and a bunch of teams from college including the preps. Overall, Yates creates a witty yet exhilarating film about a young man trying to find himself with the aid of his friends and family as well as cycling.

Cinematographer Matthew F. Leonetti does excellent work with the film‘s cinematography to play into the sunny and colorful look of the scenes set in Bloomington as well as the Indiana University campus as well as some low-key lights for some of the scenes set at night. Editor Cynthia Scheider does nice work with the editing as it is mostly straightforward with some stylish cutting for a few montages and in the racing scenes. Art director Patrizia von Brandenstein and set decorator Lee Poll do terrific work with the look of the home that the Stoller family live in as well as the limestone quarry watering hole the guys hang out at.

Costume designer Betsy Cox does wonderful work with the costumes as it is mostly casual from the look of Stoller and his friends to the more stylish look of the college preps. Sound editors Michael Moyse and Dan Sable do superb work with the sound in capturing the raucous sound of the town as well as the locations in Indiana University as well as the sparse sounds of how bikes sound in a race. The film’s music largely features an array of Italian opera music that is adapted by Patrick Williams as it plays into Stoller’s obsession with Italian culture as it’s mainly used for humor as well as a romantic scene where Stoller serenades a young woman.

The casting by Jane Feinberg and Mike Fenton is great as it include some notable small roles from John Ashton as Mike’s police officer brother, Amy Wright as Moocher’s girlfriend Nancy, P.J. Soles as a sorority girl who would try to get Stoller and Cyril in trouble, and Hart Bochner as a college preppie who hates the cutters as he tries to show off and such. Robyn Douglass is wonderful as Katherine as a college student that Stoller tries to woo as he pretends to be Italian to impress her. Barbara Barrie is superb as Stoller’s mother Evelyn as this woman that is supportive of her son while trying to get her husband to eat healthy. Paul Dooley is fantastic as Stoller’s father Ray as a used-car salesman who is annoyed by his son’s Italian fascination and accent as he is just so fun to watch as well as be this sense of warmth as a man that has done a lot in his life despite his lack of any real success.

Jackie Earle Haley is excellent as Moocher as a guy who wants to commit to his girlfriend while struggling to find work as also hates being given insults relating to his height. Daniel Stern is brilliant as Cyril as a former football player struggling to find himself while being very laid-back about his approach to life where he thinks about going to college. Dennis Quaid is amazing as Mike as another former football player who is convinced that he’s never going to succeed but doesn’t want to give up as it’s a very commanding performance from Quaid. Finally, there’s Dennis Christopher in an incredible performance as Dave Stoller as a young man whose love of cycling and Italian culture has him excited for the arrival of the Italians as he then copes with realities of the world as well as his own identity as a man.

Breaking Away is a phenomenal film from Peter Yates. Featuring a great cast, a heartfelt screenplay by Steven Tesich, and some very entertaining moments. It’s a film that isn’t just this compelling sports film but also a coming-of-age film that manages to do a lot as well as create characters that audiences can root for. In the end, Breaking Away is a spectacular film from Peter Yates.

I've never really thought too deeply about this film but you've scooped out so much more from it that I ever did!

I had it in my DVR hard drive as it's a film I've only seen in scattered bits as I decided to see it as a whole as it is a great film. It's a film that my dad loves.