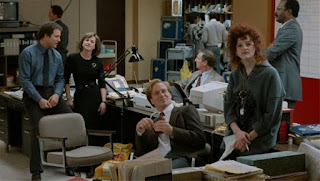 Written and directed by James L. Brooks, Broadcast News is the story of a neurotic TV news producer who finds herself torn between her loyalty to a cynical reporter and a charismatic but dim anchorman. The film is an exploration of the world of news media where three people try to help bring news to the world in an ever-changing world. Starring Holly Hunter, Albert Brooks, William Hurt, Joan Cusack, Lois Chiles, Robert Prosky, Peter Hackes, and Jack Nicholson. Broadcast News is a witty yet captivating film from James L. Brooks.

The film revolves around a love triangle between a TV news producer, a veteran reporter, and a new anchorman for a Washington D.C. news station as they all try to report the news and sell it to the public. It’s a film that isn’t just an exploration of the world of news but also the lives of three people who are part of this world as they struggle to find their roles in it. Especially as their professional ideals and lives begin to clash with their own personal lives in this complicated love triangle where they’re all trying to do the same thing despite their different takes on the news. James L. Brooks’ script doesn’t just the explore the conflict about how the news should be presented and sold to the public but also in the ideals of these three characters.

The TV producer Jane Craig (Holly Hunter) is someone that believes that the news should be told and not embellished as it’s something the reporter Aaron Altman (Albert Brooks) also believes though he is more cynical about the way news is being told and commercialized for a mass audience. Coming into their lives is Tom Grunick (William Hurt) who has the looks and charm of a news anchor but isn’t very smart as he knows that where he wants to help as he met Craig during a convention about the ethics of news. Grunick is someone that has the look to report and tell the news to the public as he is everything Altman isn’t as he is nice and not trying to offend anyone. Altman is a prick because he is passionate about wanting to get the facts straight and be true to the news. While Craig doesn’t think highly of Grunick at first, she eventually realizes his potential as well as the fact that he is actually presentable and can do his job.

It’s not just in the development of the story and the characters where Brooks succeeds at but it’s also in the many quirks of the characters such as Craig who is quite neurotic and often cries daily. She is also not in a relationship or involved with anyone other than Altman until Grunick appears as he is a very interesting person despite his lack of intelligence. Altman is baffled by how Grunick would get work so easily yet when Altman is given the chance to cover the news. Grunick gives him a few pointers on how to present himself as it would be a turning point for him but also with some realizations that he must face. The film also features a subplot that comes in its second half as it relates to a dangerous layoff due to budget cuts as it plays into the reality of the TV news world where it’s not just about ratings but also money.

Brooks’ direction is very simple in terms of the compositions he creates yet does manage to infuse some style into the way the newsroom and what goes on behind the scenes are shown. The film opens with a trio of prologues that relates to the main characters as children as it shows exactly who they are and what they would become as adults. Shot largely in Washington D.C. with some parts shot in Maryland and Virginia, the film does play into a world that is very energetic and demanding where Brooks doesn’t use a lot of wide shots as he favors something more intimate in the medium shots and close-ups. There are moments where Brooks’ direction does have some style such as this shot of Grunick in the foreground shot from behind while Craig is in the background very far in a wide shot as it play into what goes on in news reporting.

One notable sequence involving trying to get tape and such for a news report is among one of the most inventive and exciting moments in the film where it does have this air of realism in what Brooks is showing. Even as it shows an editor trying to cut something to the last second and get it to be aired for the evening news. Brooks’ direction is also very light-hearted in scenes where there’s a gathering or moments that are quite comical but not overtly. It’s told with a sense of restraint while not being totally forced as well as some of the drama though it does get quite heavy towards the third act as it relates to the love triangle between Craig, Altman, and Grunick. Especially as it reveals a lot about who they are and what they want for the world of TV news reporting. Overall, Brooks creates an insightful yet riveting film about three people in a love triangle while trying to report the news to the world.

Cinematographer Michael Ballhaus does excellent work with the film‘s cinematography as it‘s mostly straightforward to play into the look of the locations in its daytime/nighttime exteriors as well as some unique lighting for the interior scenes. Editor Richard Marks does brilliant work with the editing as it play into the frenzy of what goes on in the newsroom and behind the scenes along with some straightforward cutting for the dramatic and comedic moments outside of the newsroom. Production designer Charles Rosen and set decorator Jane Bogart does fantastic work with the look of the editing room in the news room and the homes of some of the characters.

Costume designer Molly Maginnis does nice work with the costumes as it is kind of casual with bits of style as well as some of the infamous clothing of the 1980s with fake shoulder pads. Sound editor Robert Grieve does terrific work with the sound from the way the chaos of trying to get a story displayed on television to the sound of the gatherings the characters go to. The film’s music by Bill Conti is wonderful for its score that is mainly a mixture of low-key piano-based music with some electronic keyboards to play into the world of the TV news.

The casting by Ellen Chenoweth is great as it features some notable small roles from Kimber Shoop as the young Grunick, Dwayne Markee as the young Altman, Gennie James as the young Craig, Stephen Mendillo as Grunick’s father, Ed Wheeler as an anchorman in George Wein, Glen Roven and Marc Shaiman as a couple of music composers trying to create a new theme for the news channel, Christian Clemenson as the TV editor Bobby, Leo Burmester as Craig’s father, Marita Geraghty as a date-rape woman that Grunick interviews, and a low-key cameo appearance from a faceless John Cusack as an angry messenger. In another notable small role that is a cameo of sorts, Jack Nicholson is superb as the evening news anchorman Bill Rorish as this legendary reporter that tells the news to the world as he carries some seniority as well as being the one guy everyone has to make sure he looks good. Peter Hackes is excellent as the news station boss Paul Moore who tries to keep things going while dealing with the financial chaos of the station. Joan Cusack is fantastic as Blair Litton as a staff member who is also Craig’s best friend of sorts who has an amazing scene running around the office to bring a tape in and evade all sorts of obstacles.

Lois Chiles is wonderful as anchorwoman Jennifer Mack who takes a liking towards Grunick as she would briefly go out with him. Robert Prosky is brilliant as Ernie Merriman as the station’s manager who tries to keep things afloat while being aware of the layoffs that might emerge. Albert Brooks is phenomenal as Aaron Altman as this very intelligent and idealistic reporter who has always been behind the scenes or covering events around him as he copes with Grunick’s presence as well as his attempts to bring some substance to the world of news. William Hurt is remarkable as Tom Grunick as this dim but kind-hearted reporter that has the looks and charms to be an anchorman as it’s a very complex character as he represents someone that wants to make the news more accessible. Finally, there’s Holly Hunter in an incredible performance as Jane Craig as a TV news producer who is torn between two men while often crying for some odd reason as it’s a very fiery and energetic performance that play into a woman trying to maintain the idea of what TV news should be.

Ugh. I still need to see this.

I've never seen this one, though I've heard of it. I think it's something I would probably really enjoy. I'll have to check it out. Great review!

Boy I've been meaning to check this out, I love movies about broadcast journalism. For some reason I didn't know James L. Brooks directed this also.

@Wendell-It's a very important film that plays into the world of TV news and all of the shit that happens.

@Brittani-It is quite entertaining but it is also very smart in its exploration of ideals and ethics of news.

@ruth-I'll admit that I'm not a fan of James L. Brooks' work as a filmmaker but I keep hearing about this one as I decided to check it out and I think it's the best film he's done as it's not forced in its humor or sentimentality as with the rest of his films which is probably why I don't like them.

It's funny you have a review of this up. I just rewatched it for a retro review myself. It had been a LOOONG time.

Great minds think alike! I was just contemplating watching this again recently for a review for my own blog. I know a lot of people cite TERMS OF ENDEARMENT or AS GOOD AS IT GETS as James L. Brooks' best work but for me, BROADCAST NEWS is his masterpiece. Not only is it a snapshot of its times (network news has changed A LOT since then) but he manages to make a romantic comedy about a love triangle involving three people that aren't that likable but you stick with them because of the actors that bring them to life. Great stuff.

@J.D. Lafrance-It is a very engrossing and entertaining film while it also showcases a lot of these unique personalities and how flawed they are.