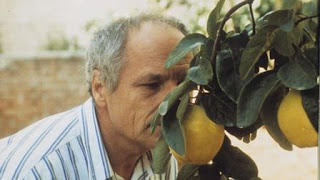 Directed by Victor Erice and written by Erice and Antonio Lopez Garcia, El sol del membrillo (The Quince Tree Sun or Dream of Light) is a half-documentary/half-narrative driven film about the artist Antonio Lopez Garcia and his attempt to paint the quince tree. It’s a film that explores Garcia’s process which is described as meticulous where the man also deals with his own sense of mortality and the drive to do this painting. The result is a rich and engrossing film from Victor Erice.

Shot from September to December of 1990 with additional shooting in the spring of 1991, the film is a simple exploration of Antonio Lopez Garcia’s attempt to paint the quince tree in his backyard. The film showcases his meticulous approach to painting the tree from the pegs on the ground where he would use it to maintain a certain position as he’s painting to the marks he would make on the tree to know the attention to detail of what he’s painting. With the usage of symmetry by tying strings on the tree and hanging a weight on it, Garcia would find a center of what to paint as the markings would also show where the position has changed during the days in his attempts to paint this tree. During the course of these four months, Garcia would have two attempts in painting this tree from the fullness in the early stages of autumn to succumbing to the cold winter and rotting fruit that would follow which include some of his markings.

With the aid of cinematographers Angel Luis Fernandez and Javier Aguirresarobe, director Victor Erice would capture Garcia as he attempts to paint this tree while also capturing Garcia’s life at home where his wife Marina Moreno, who is also an artist, is overseeing the remodeling of his home as they’re visited by their daughters as well as another artist in Enrique Gran. While Erice would shoot some of the conversations that Garcia is having with Gran who talks throughout while Garcia is painting. Chinese tourists arrive to meet Garcia as he goes into great detail into his process as he copes with trying to achieve a sense of realism into his paintings. Throughout the course of the film, Garcia goes into great detail to get the right look and tone of a leaf or a quince fruit as he would have something going until late October where he deals with a terrible storm in and around Madrid.

Erice’s usage of close-ups and wide shots doesn’t just capture the depth of this painting-in-the-works but also what Garcia would do to start over as it relates to the second attempt where it felt more like a draft of what he wants to do as he would start all over again during the film’s second act. With the help of editor Juan Ignacio San Mateo in assembling and capture the many hours of footage to showcase the evolution of Garcia’s painting through days and weeks into how it would come into fruition. The sound work of Ricardo Steimberg and Daniel Goldstein is excellent in maintaining something that is natural as well as the kind of music that Garcia plays in his radio along with the broadcasts that is happening in and around Spain. The film’s music by Pascal Gaigne is wonderful as it is mostly low-key with its string-based music to play into the determination that Garcia is in achieving absolute realism into his painting.

El sol del membrillo is an incredible film from Victor Erice. While it’s not an easy film to watch due to its slow pacing and can meander at times. It is still this fascinating film that is very unconventional in its tone where it may have the look of a documentary but it feels like a narrative-based film as it showcases what an artist does to try and achieve what he’s going for. In the end, El sol del membrillo is a remarkable film from Victor Erice.

Victor Erice Films: The Spirit of the Beehive - El Sur

Well this one deserves a second look, doesn't it?

@assholeswatchingmovies.com-Probably as it's not an easy film to watch as I downloaded it on a torrent. I'm sure if it's available in a remastered print on DVD/Blu-Ray, it would be easier but it is still an interesting film.