For the first week of May of 2017 as part of the Thursday Movie Picks series hosted by Wanderer of Wandering Through the Shelves. We venture into the world of clones/doppelgangers where it is about identity and who people are and such. Even if that person wants to be this person or to be cloned as that one. Here are three films that I pick on this subject: 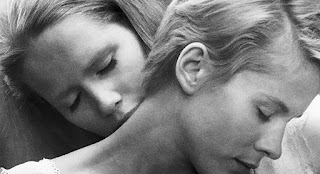 Ingmar Bergman’s film about a nurse taking of a traumatized actress who has become mute might not fit in with the subject but it does play into the world of identity as well wanting to be someone. Starring Bibi Andersson and Liv Ullman, the film is definitely one of the most challenging as Andersson’s nurse character would embody the personalities of Ullman’s actress character that she is caring for and vice versa as if they become one person. It’s a very challenging film but certainly a must-see for anyone who wants to explore the works of Ingmar Bergman. 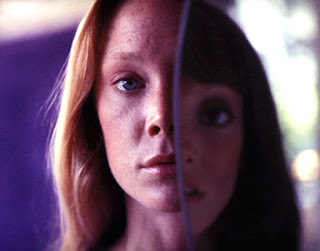 In one of two films that was directly inspired by Persona, Robert Altman’s 1977 film is about two women with very different personalities who live together in Los Angeles working at a health spa. With Sissy Spacek as this newcomer who would become Shelley Duvall’s roommate/co-worker,

Spacek’s shy character would take on the many aspects of Duvall’s character by living a little dangerously with Duvall taking on some of Spacek’s personalities. It’s one of Altman’s finest films as it doesn’t just go deep into this idea of doppelgangers but also identity. 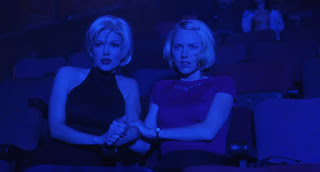 The second film that was obviously inspired by Persona is a much stranger film where if one paid attention to the narrative. They wouldn’t think it is about doppelgangers but the film’s narrative would change completely in its third act as it is about identity. Laura Elena Harring’s character is this amnesiac movie star who has no idea who she is as she calls herself Rita where she would later take on a blond wig to look like her new friend Betty who is played by Naomi Watts. The third act is a complete mind-fuck where it changes everything that was previously seen as it definitely play into the world of doppelgangers and who these women want to be. In many ways, Betty is a doppelganger of another woman while Rita is the doppelganger of the actress. This is all part of a strange world that David Lynch has created as it is remains his best film to date.

Okay fine, you've convinced me to see Persona even though you used the word challenging twice in one paragraph!

You have a the,e within a The,e here and it's excellent even though I have only seen Persona. Persona is one nutbar film and soooooo Bergman:) I haven't seen the other 2 but they are now on my list even though I know I will be shaking my head in the WTF style.

All films with women protagonists, a little theme within the theme. Love those!

I liked but didn't love 3 Women though I was glad it provided good roles for 3 wonderful actresses, I've always had a soft spot for Janice Rule who was rarely properly used by Hollywood.

I couldn't get into Mulholland Drive. Maybe I went in with too high expectations, I only saw it recently and had heard nothing but praise heaped on it for years. Whatever that specialness was it eluded me.

Persona is on my list but I can only do Bergman films every so often and I haven't recovered from the last cycle yet but one day.

I'm loving the variety in the picks this week, the theme seems to lend itself to being adaptable to many different genre. I was able to find an example in three disparate ones where it worked well.

The Devil’s Double (2011)-During Saddam Hussein’s iron fisted reign in Bagdad Latif Yahia (Dominic Cooper), a lieutenant in the Iraqi army, is called to the palace and told that because of his resemblance to Hussein’s depraved son Uday (also Cooper) he is commanded to be his body double or his family will be exterminated. Having no choice but sickened by the corruption, inhumanity and evil he witnesses he searches for a way to escape and save his family at the same time. This is Cooper’s movie all the way and he’s just great but it’s a hard film to watch.

Dave (1993)-Dave Kovic (Kevin Kline) is an affable Midwesterner, running a temp agency and making appearances at small events due to his resemblance to the current US president, Bill Mitchell (also Kline). The Secret Service takes note of the similarity whisking Dave off to the capitol as a stand-in for Mitchell at an event. While there an emergency arises, Bill Mitchell has suffered a devastating stroke and his power mad aide Bob Alexander (Frank Langella-oozing slime) and press secretary Alan (Kevin Dunn) talk Dave into assuming his place theoretically for the good of the country. Actually Alexander is seeking to usurp the political reins until he can figure out how to take full control. At first the subterfuge is known only by the two and a dutiful Secret Service agent Duane Stevenson (Ving Rhames) but as Dave starts to rebel against their treachery and display his very different personality First Lady Ellen Mitchell (Signourney Weaver) begins to suspect. There’s plenty more machinations in store all delightfully directed by Ivan Reitman and put over by exactly the right performer in each role. Thoroughly beguiling comedy with a perfect cast.

I Was Monty’s Double (1958)-A retelling of the true event where an enlisted man, M. E. Clifton James (who plays himself) was chosen to imitate Field Marshal Montgomery--the leader of the British forces during WWII. The plan (Operation Copperhead) was to have Monty’s double go on a tour of North Africa around the same time as the Normandy invasion in Northern France--so that the Germans would assume the assault would come later than actually planned and from the South. The film is about the formation and execution of the ultra-top secret plan but while it treats the subject seriously it leavens the situation with a much needed humorous undertone aided by a terrific British cast including John Mills and Cecil Parker.

I've only seen Mulholland Drive. Way too complicated for me, but I've only seen it once. One of these days I'm going to go back to it as I've been told I should. Sounds like I need to see Persona, though.

I love Persona. Mulholland Drive is great too but the back half of that movie just loses me. I haven't seen 3 Women though.

Love all 3, great to see 3 Women here it's so underseen!

I knew Persona would have to be on here. It really probes the very nature of identity and duality in haunting fashion.

All these movies sounds amazing - even Lynch's - but I'm still wary of his films after I was disturbed by Inland Empire.

Hell yeah, great picks. I obviously love your choices and the reasons behind your choices. Three of my all-time favorite movies right here.

@assholeswatchingmovies.com-Well, it is a daunting film to watch but certainly worth it.

@Birgit-I knew I had to go outside of the box a bit and go for the kind of films that share something very similar.

@joel65913-I just saw The Devil's Double last week as I thought it was pretty good. Dave is a film I like as I think it's the last great film Ivan Reitman has made.

@Wendell-I think you should give Mulholland Dr. a re-watch as it is complicated but certainly fun to watch.

@Brittani-The back half of Mulholland Dr. is the movie as everything else you had seen before that is something entirely different. That's what's so great about David Lynch.

Sati-Thank you. I'm glad you love those 3 films.

@vinnieh-Exactly. It's the best film to fit in with that category.

@Katie Hogan-Well, Lynch did announce he's no longer going to make anymore films. I'm sad but at least we got a new season of Twin Peaks coming so that's more than enough.

@Alex Withrow-Of course. How can you have a list on doppelgangers w/o those 3 films?