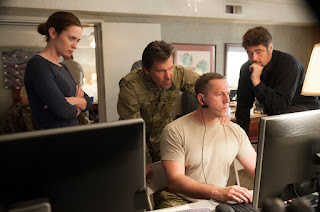 Directed by Denis Villeneuve and written by Taylor Sheridan, Sicario is the story of a FBI agent who is asked to join a government task force to take down a drug cartel where she finds herself dealing with the dangers of her new job. The film is an exploration of the drug world where a young woman with ideals is given a harsh look of reality into the new job she’s in. Starring Emily Blunt, Josh Brolin, Victor Garber, and Benicio del Toro. Sicario is an eerie yet gripping film from Denis Villeneuve.

The film follows a FBI agent whose work in busting homes has gotten the attention of a CIA officer to be part of a task force to stop a drug cartel with the aid of mysterious man who knows a lot about the drug world. It’s a film that explore the war on drugs as it’s set entirely in the American Southwest as well as Mexico with the city of Juarez as the center of this drug trade. Even in the eyes of an idealist who is hoping to do what is right as she then copes with not just the dangers of this drug war but also some of the darkest aspects of what some will do to ensure the fall of the drug trade. Taylor Sheridan’s screenplay is filled with a lot of ambiguities as it relates to the war on drugs where it is told from multiple perspectives. Yet, it’s the protagonist in Kate Macer (Emily Blunt) who is just a simple FBI agent that goes in to bust houses of suspects and make sure people are OK. Still, she isn’t sure if she wanted to be part of this task force headed by the CIA agent Matt Graver (Josh Brolin) as he’s joined by his partner Alejandro Gillick (Benicio del Toro).

The script’s first act is about Kate being part of this task force and seeing everything as an observer while the second act has her taking a fellow FBI agent in Reggie Wayne (Daniel Kaluuya) to an assignment where they get a very close look at what Graver and Alejandro does. Even as Kate realizes that she just can’t simply sit by idly and watch all of these happening as these guys in the task force are doing things in their own will. Though Kate does get some sympathy from Gillick as he is aware of her reluctance, he also tells her that she is now in a world that is very unforgivable. Sheridan’s script also showcase glimpses of a policeman in Mexico named Silvio (Maximiliano Hernandez) as someone who could be working for a cartel as it shows not just what some are willing to do to survive but also be part of this drug war.

Denis Villeneuve’s direction is definitely intoxicating in its beauty but also has something that is very unsettling due to the subject matter and the environment in which the story takes place. Shot on locations in Albuquerque, New Mexico and areas nearby as well as El Paso, Texas and various locations in Mexico, the film does play like a world where the drug trade is near the American suburbs but also has this feel of the West. Villeneuve’s usage of the wide shots play into the vastness of the locations where it is quite eerie. Even in scenes which includes a climatic raid through desert tunnels showcase the grandness of the drug war where it is also quite frightening where Villeneuve would also use some medium shots and close-ups to play into the suspense. There are moments that are quite violent such as the opening sequence which doesn’t really involve any major gunplay but it would have something that would play into the harsh world that Kate is in.

Villeneuve would also create some low-key dramatic moments as it play into not just the investigation but also the world of the drug war as there’s a scene of Kate on a rooftop looking at Mexico noticing the war between various drug factions at Juarez. There are also moments where Villeneuve would maintain a sense of ambiguity which relates to Gillick as he’s about to torture someone but it is never shown. He is also key to the film’s third act during its climax where it features usage of thermal and night-vision filters in those scenes. The climax would also showcase what some will do to keep the drug wars alive as it would definitely shape everything Kate believes in as it is all about the bigger picture in the war against drugs. Overall, Villeneuve creates a visceral yet harrowing film about a FBI agent being part of a dangerous task force to bring down a drug cartel.

Cinematographer Roger Deakins does incredible work with the film’s cinematography as it is a major highlight of the film with its usage of gorgeous exterior daytime lighting for the scenes in the desert as well as some of its interiors and the exterior scenes at night and in the morning. Editor Joe Walker does brilliant work with the editing as it utilizes some rhythmic cutting to play into the action and suspense as well as establishing what is going on without deviating into fast-cutting styles. Production designer Patrice Vermette, with set decorator Jan Pascale and supervising art director Paul D. Kelly, does amazing work with the look of the motels and homes where some of the characters live in as well as the base and offices of the government task forces. Costume designer Renee April does nice work with the costumes as it is mostly casual from the rugged clothes and camouflage of the task force as well as the clothes the characters wear outside of work.

Visual effects supervisor Alexandre Lafortune does terrific work with some of the film’s minimal visual effects for a few scenes which include the scene of Kate witnessing a drug battle from afar. Sound designer Tom Ozanich and sound editor Alan Robert Murray do fantastic work with the sound as it help play into the intense atmosphere of the violence as well as in the moments of suspense. The film’s music by Johann Johansson is phenomenal as it play into the drama and suspense with its dark-ambient textures with droning bass sounds and eerie electronic arrangements while music supervisor Jonathan Watkins creates a low-key soundtrack filled with mostly country music for a scene at the bar and traditional Mexican music in Mexico.

The casting by Francine Maisler is great as it feature some notable small roles from Bernardo Saracino as a drug boss in Manuel Diaz, Raoul Trujillo as a drug hitman, Julio Cesar Cedillo as a mysterious drug lord, Jeffrey Donovan as an aide of Graver in Steve Forsing, Maxamiliano Hernandez as the Mexican cop Silvio, and Victor Garber as Kate’s boss Dave Jennings who tell her about what she needs to do in order to be part of this dangerous task. Jon Bernthal is terrific as a man named Ted that Kate meets in the bar during the film’s second act while Daniel Kaluuya is fantastic as Kate’s fellow FBI agent Reggie as a rookie-of-sorts who also shares Kate’s ideals while also know a lot more about the law.

Josh Brolin is amazing as Matt Graver as a CIA agent heading a drug task force to take down a drug cartel as someone who doesn’t reveal a lot into what he does as he brings some humor to his role as well as moments that play into the real ideas of the drug war. Benicio del Toro is incredible as Alejandro Gillick as a mysterious man who is part of the task force as someone who is quite ambiguous in what he does as he’s got no qualms in killing people while he understands Kate’s own reluctance into what they have to do. Finally, there’s Emily Blunt in a sensational performance as Kate Macer as a FBI agent who reluctantly volunteers to be part of task force to stop a cartel hoping she would make a difference where she realizes not just the things that has to be done but also the rules that need to be broken as it veers into the world of cynicism as Blunt is quite understated in scenes as well as knowing when to react into everything she encounters.

Sicario is a tremendous film from Denis Villeneuve that features great performances from Emily Blunt, Benicio del Toro, and Josh Brolin. Along with a strong ensemble cast, engaging themes on the war on drugs, and some incredible technical work by its crew. It’s a film that isn’t willing to play nice as well as showcase many of the dark aspects of the drug world and how both sides in the drug war try to engage one another. In the end, Sicario is a magnificent film from Denis Villeneuve.

Sicario is amazing. I remember when I saw a trailer for it I didn't think much of it at all, then all the reviews started coming in and I had to see it. SO happy to be proven wrong there. That made my Top 10 list of that year.

It is an incredible film and I'm finally glad I saw it as I borrowed the DVD from the local library which has some damn good films there as I'm now going to catch up on some things I missed out on. It's currently in my top 10 films of 2015 so far....

Awesome review, glad you liked it this much! Del Toro is my win for supporting actor there, I wonder how the sequel is gonna turn out

@Sati-I hope the sequel is good. This was a great film and certainly one I would like to see again.

This was on my top 10 list of that year and one I need to rewatch. I am very interested to see Blade Runner 2049 more then ever if the same composer,cinematographer and director are involved

@TheVern-Roger Deakins is shooting Blade Runner 2049. I don't know if Johann Johansson is doing the score but 2 out of 3 ain't bad.

The first and last scene were powerful. Didn't love the middle, which to me was too dull for a thriller. The acting was convincing, but doesn't have the humor of say Arrival. I guess Sicario is deliberately dark and unpleasant due to the nature of the story, and it just wasn't for me. Think I'm in the minority as most praise it!

Great review. I forgot this one was in Cannes competition. It's one of my favorite films from the past few years. Unrelenting tension. Very excited for the follow up.

@Chris-I don't think humor would've fit in well with that film as it is dark but definitely engrossing.

@Alex Withrow-I hope they get the right director for its sequel.

This an intense and gripping film that really had me white-knuckling it through a few scenes. I found it interesting how you initially think that the film is going to be about Kate but it is actually about Alejandro and his journey. The reveal where we finally find out why he's doing what he's doing is chilling. Del Toro really nailed it. He's so good in this, creating such an ominous person but in such an effortless way.

@J.D. Lafrance-That was what made the film so interesting as you realize what it takes for the drug war to end but we all know that there could never be an end. Benicio del Toro is just one of those guys who can't suck. You can put him in a bad movie and he will always kick ass.