For the second week of May of 2017 as part of the Thursday Movie Picks series hosted by Wanderer of Wandering Through the Shelves. We go into the world of deserts whether they’re hot or cold. Films set in places that are either the hottest parts of the world or the coldest. Here are my picks: 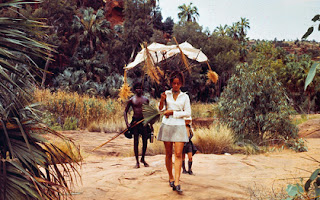 Nicolas Roeg’s 1971 film is set in the Australian outback where two kids get lost after their father had gone insane and killed himself where they’re saved by a young Aboriginal boy. Featuring outstanding cinematography and compelling themes of youth as well as growing into adulthood, the film is definitely a hypnotic film in terms of what Roeg does. Even as he is willing to explore the ideas of life outside of civilization and the fascination of sex as it relates to David Gulpilil’s character and the young woman played by Jenny Agutter. 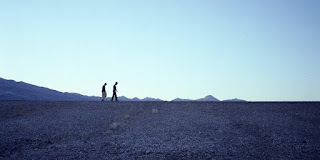 Based on a real-life event, the first part of Gus Van Sant’s Death Trilogy follows two guys named Gerry who go on a hike through the desert and then get lost. Starring Matt Damon and Casey Affleck, who both co-wrote and edited the film with Van Sant, in this very unconventional film that completely deviates from traditional plot. Yet, it features some of the finest photography captured on film courtesy of the late Harris Savides as well as images set in Death Valley as Van Sant paid tribute to the cinematic style of Hungary’s Bela Tarr for much of the film’s visual approach. 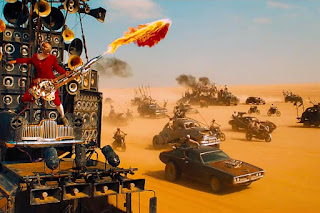 If there’s one film that definitely fits into the world of the desert as an unforgiving environment, it’s George Miller’s fourth entry into the world of Mad Max where it has this sense of total chaos in a post-apocalyptic world where water is scarce and young women are used as objects for an evil tyrant. The performances of Tom Hardy as Mad Max and Charlize Theron as Imperator Furiosa is what makes the film so enthralling to watch as well as the action sequences which proves that practical effects are so much better than the visual effects that is often created by machines.

Fury Road is great. Haven't seen your other two picks, but you've definitely made them sound appealing. I'm definitely adding them to my growing watch list.

Fury Road is the popular one today and that is obvious. It's better than I thought. I didn't see the other 2 at all and don't know the one with Matt Damon

Walkabout is on my lloonngg list of titles I've been meaning to see but haven't gotten to yet. It's just a bit hard to locate and then there's the so many films so little time factor that gets in the way.

I like Fury Road more than I thought I would without fully loving it.

I hate, hated Gerry. God it was meandering and obtuse!

Since it was kind of an odd theme I decided to dig into some obscure places which would explain my first I guess.

The Desert Song (1953)-Sometimes a movie is just so wildly miscast that you love it more for its faults than its strengths, that’s the case with this operetta. The basic story goes like so: There’s a civil war between Morocco’s Berber and Arab populations in the early 1900’s. French Foreign Legionnaire Gen. Birabeau arrives with daughter Margot (Kathryn Grayson) in tow to check the war’s progress while Arab Sheik Yousseff schemes to discredit the mysterious opposition leader El Khobar (Margot’s tutor in disguise) while Margot and El Khobar fall in love. Simple enough but what ratchets up the absurdity factor is that the Sheik is played by Raymond Massey, famous for playing Abraham Lincoln!, while El Khobar the Berber rebel leader is Gordon MacRae…that’s right Curley from Oklahoma!! If you can look beyond that the strapping Gordon and the lovely Kathryn are in great voice and the score is terrific but if you’re looking for realism look elsewhere.

Rawhide (1951)-Feisty young Vinnie Holt (Susan Hayward) traveling with her orphaned niece Callie is stranded at the remote stagecoach stop “Rawhide Pass” in the acrid desert of the old West with stationmaster Sam Todd (Edgar Buchanan) and his assistant Tom Owens (Tyrone Power) when the cavalry won’t permit her to proceed through dangerous territory because of a stage robbery. After the soldiers leave, Jim Zimmerman (Hugh Marlowe) bluffs his way into the station saying he’s a guard but is actually one of the escaped convicts responsible for the robbery. His three fellow escapees quickly appear intent on stealing the gold shipment due in the next day. After killing Sam they must keep Tom and Vinnie, who they mistakenly believe is his wife, alive to carry out their plan. As the four men turn on each other Tom & Vinnie work together to try and escape. Tight suspenseful Western.

Five Graves to Cairo (1943)-British Corporal John Bramble (Franchot Tone) is the lone survivor of a battle against Rommel’s army on the Egyptian border. Wandering through the desert he finds a remote hotel assuming a false identity to elude capture. Arriving shortly after is General Rommel himself (Erich von Stroheim) who takes Bramble for a German spy and lets slip hints of his secret strategy, the 'five graves' to Cairo-hidden excavations of supplies to enable survival across the desert. It’s up to Bramble to find a way to get word of the plan to the Allies and perhaps change the tide of the war.

Fury Road is popular this week! It is an amazing film. I haven't seen your other picks but they sound interesting.

Fury Road is great. I like Van Sant's films, but I haven't seen Gerry yet.

Love the inclusion of Gerry. I've always appreciated that film, and I also love Savides' photography of it. I forgot that movie was based on a true story. Crazy stuff.

Heard of Gerry, but have yet to see it.

@Wendell-Gerry is the most difficult of the three due to its lack of plot but it is still an amazing film and certainly one of my favorite films from Gus Van Sant.

@Birgit-Many people don't know about Gerry as it's the third of four collaborations Damon did with Van Sant as it's also their most unconventional.

@joel65913-I knew there were people that didn't like Gerry. There's a lot of people that don't like that film but I love it to death as it's one of my favorite films by Van Sant. Walkabout is a must-see.

@Big Screen Small Words-It certainly is. It's the one film that I can think of at the time I was writing that list.

@Brittani-Gerry is definitely Van Sant's most polarizing film but it does fit in with his trilogy on death that includes Elephant and Last Days.

@Katie Hogan-Gerry isn't a horror film but rather an experimental film.

@assholeswatchingmovies.com-See Walkabout. It is a phenomenal film.

@Alex-I know. I think that is what makes Van Sant's death trilogy so interesting is that they're all based on real-life events.

Great picks! Another worth checking out is Ice Cold in Alex (1958), a WW2 film set in the desert and has the best ending you'll ever see.

Oh, I'll add that to my watchlist. Thank you.