For the third week of May of 2017 as part of the Thursday Movie Picks series hosted by Wanderer of Wandering Through the Shelves. We venture into the world of the Renaissance. A period during the 14th to the 17th Century where it moved out of the medieval age and into a period which of cultural advancement as well as the discovery of new worlds. Here are three films set in that period that showcases the best and worst examples of those times.

Terrence Malick’s dramatic interpretation of the Jamestown colony founding, depending on what cut of the film, is truly one of the finest films set in a historical period. Set in the early 17th Century, the film is a look of a world discovered by Europeans as they try to share and deal with the natives only for things to go wrong as much of it is told from the perspective of Pocahontas as well as Captain John Smith and Pocahontas’ future husband John Rolfe. Featuring the beautiful cinematography of Emmanuel Lubezki as well as a top-notch cast, the film is definitely one of the finest films of the 21st Century so far. 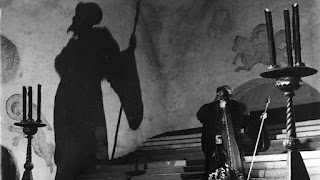 Originally meant to be a three-part film on the life of the czar who ruled Russia from 1533 to 1547 as it explores a man trying to make Russia into an empire. Released in two parts, Sergei Eisenstein’s film explores a man’s willingness to unite a country despite the terrible deeds he does. With the first part released in 1944 and the second part in 1958 just ten years after Eisenstein’s death. It’s a film that explores a man trying to deal with the chaos in his country as well as the forces outside as it is this very unconventional yet daunting film.

3. Aguirre, the Wrath of God 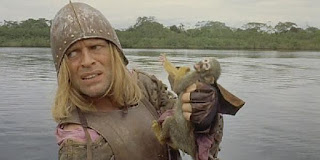 From one of cinema’s great madmen in Werner Herzog comes the first of five fruitful collaborations with actor Klaus Kinski in this story of a conquistador trying to find a lost city of gold in the Amazon. It’s a study of madness and obsession as it is shot on location in the Peruvian Amazon with additional locations in Machu Picchu to give the film an authenticity that is kind of lacking with most period films. Kinski’s performance is definitely astonishing to watch as there is something about him that is fucking crazy yet it is also fascinating to see him be so determined. It’s a film that really captures the idea of men trying to enter a new world to find something only to succumb to their own follies.

I have been meaning to watch The New World for eons but its rep for being slow moving, as all Malick's are, has kept it from jumping to the top of my list.

I appreciated Eisenstein's skill when I saw Alexander Nevsky without it making me especially eager to seek out more of his work but I might have to try and track down Ivan the Terrible.

Aguirre is a typically intense collaboration between Herzog and Kinski-a bizarre match made in heaven/hell.

Like that you jumped around to different locales for your picks. I always think of the Renaissance as being firmly placed in the European countries and that's were all my choices take place.

The Advocate aka The Hour of the Pig (1993)-Richard Courtois (Colin Firth) a lawyer in 15th century France tired of the chicanery and lawlessness of Paris moves to the small rural town Abbeville along with his clerk Mathieu (Jim Carter) when he’s offered a job as a public defender. This being a period when animals were held accountable for crimes with the same punishments handed out to humans he soon finds himself defending a pig accused of murdering a Jewish boy. Pitted against a determined prosecutor (Donald Pleasance) and Catholic priest (Ian Holm), Richard defends the animal and becomes enamored of its owner, beautiful gypsy Samira (Amina Annabi). Along the way he finds out about the strange goings on behind the doors of the seemingly tame townspeople. The medieval justice system and local superstitions mingle as the case plays out. A strange and quirky film this is based on the journal of an actual barrister of the period.

Queen Margot (1994)-Dark and dire tale of the 16th century religious battle between the Catholics and the Huguenots for control of France. King Charles IX and his mother the dower queen Catherine de ’Medici (a simply sensational and scary Virna Lisi as a merciless woman whose soul has turned to dust) offer the Princess Margot (Isabelle Adjani-brilliant) to the Protestant King of Navarre in marriage as a political pawn. Trapped and unhappy Margot soon starts an affair with a soldier (Vincent Perez) as her mother orchestrates the St. Bartholomew’s Day massacre of thousands of Huguenots as well as murderous intrigues to place her other son on the Navarre throne. Blood splattered revenges and double crosses follow.

Quentin Durward (1955)-Plush version of Sir Walter Scott’s tale of a Scottish knight, the Quentin of the title (Robert Taylor) sent to France by his cash strapped uncle to propose to a wealthy and titled lady, the fair Isabelle (Kay Kendall) who is at the moment at the castle of King Louis XI (the amusing Robert Morley-owner of the stupidest looking crown in any movie ever). Once arrived there is intrigue aplenty with attacks and sword fights including one where the protagonists dangle from bell tower ropes inside a burning church. Entertaining derring-do was one of the few leads that the luminous Kay Kendall had before leukemia claimed her at 33.

I've only seen The New World and, to be honest, I wish I hadn't. Malick just does not work for me. It just moves SOOOO SLLLOOOOWWW and is so uninteresting.

The only one I've seen is The New World, and I can't do Malick. It's the least annoying Malick movie I've seen, but still. It's not for me.

This is wild ride of different films but brilliant even though I have not seen any of these:) I do want to see New World and remember it being advertised. I have read about the other 2 but just want to see the Russian film(s).

A fascinating list of films. I admire your wide range of taste.

Ooooh, I love Aguirre! It's such an intense, crazy ride of a movie, and I watched it without knowing anything about it.
I've been meaning to watch The New World, seems like there are many people who hate it but also some who like it.

I've only seen The New World. Saw it first way back when it was released on home video then again recently. I appreciate it more the 2nd time. I didn't find it too slow.

@joel65913-I have definitely heard of Queen Margot but I haven't seen it. As for The New World. Start with the 135-minute theatrical release. Yes, it's slow but it's so worth it as it really play into a lot of the historical aspects of what was happening in those years.

@Wendell-I know you're not a Malick fan. Since you're not into slow films, then you're going to really hate some of the Russian films you want to see.

@Brittani-Malick isn't for everyone and he's definitely become more polarizing in recent years.

@Birgit-Ivan the Terrible is something every film buff should see as it has these incredible images and its approach to history.

@vinnieh-Well, that is what I do as I like to mix things up.

@Mette-A lot of people don't like The New World as it's mainly due to its pacing and lack of conventional plot but that is expected when it comes to Malick. He won't grab you the first time but if you're intrigued about seeing it a second time. You'll see something you missed out on.

@Wanderer-I've now seen all 3 versions of the film and you can't go wrong with any of the versions as it's definitely one of Malick's best films.