(Played Out of Competition at the 2016 Cannes Film Festival) 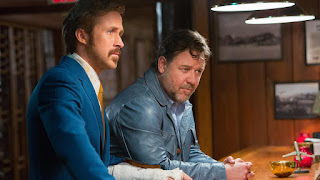 Directed by Shane Black and written by Black and Anthony Bagarozzi, The Nice Guys is the story of a down-on-his-luck private detective who teams up with an enforcer to find a missing young woman in 1977 Los Angeles amidst a world of corruption and pornography. The film is an offbeat neo-noir film that explores two mismatched men who work together to try and do good as they go into a wild adventure. Starring Russell Crowe, Ryan Gosling, Angourie Rice, Margaret Qualley, Matt Bomer, Keith David, and Kim Basinger. The Nice Guys is a thrilling and exciting film from Shane Black.

The film revolves the worst private detective who reluctantly teams up with a brutish enforcer to find a missing young woman as she is connected to the death of a porn star. It’s a film with a simple premise involving mismatched men who work together to find this young woman as they venture into the world of pornography and its relation to the world of crime. The film’s screenplay by Shane Black and Anthony Bagarozzi is a mixture of noir with some offbeat humor as it play into the two protagonists who aren’t part of the police force nor do they do anything conventional which makes them a perfect team. The enforcer Jackson Healy (Russell Crowe) is a guy hired to beat people up as he would meet this loser private detective in Holland March (Ryan Gosling) during an assignment where he beats him up. When Healy is attacked by two thugs who is trying to find this missing young woman in Amelia Kuttner (Margaret Qualley), he turns to March for help with March’s young daughter Holly (Angourie Rice).

It’s not just the mystery that is so interesting but it’s also the characters as Healy and March are guys who try to help people but they never reach their full potential until they work together. During the course of the film as they work together to solve this mystery, Healy and March learn more about each other as they become unlikely friends with Holly gaining a second father of sorts in Healy. When the two meet up with a high-ranking official from the Department of Justice in Judith Kuttner (Kim Basinger) who is revealed to be Amelia’s mother. The search for Amelia becomes more complex as it becomes clear someone is after her since she knows something as it doesn’t just relate to her mother’s disdain towards pornography but also something to do with the auto industry.

Black’s direction is definitely stylish as it play into the world of 1970s culture as it begins with a young boy (Ty Simpkins) sneaking under his parents bed to see a porno magazine when a car suddenly crashes into his home with the body of the same naked woman from that magazine. Shot largely in Atlanta and Decatur, Georgia with many exterior locations in Los Angeles, the film play into a world that is in disarray with a gas shortage as well as a smog pollution looming over Los Angeles. Black would use some wide shots to establish some of the locations as well as go into this world of decadence as well as it play into a period where everything is unruly but exciting. Black would use some medium shots and close-ups to focus on the characters as well as some of these offbeat moments such as Holly reading a book in a yard next to her home or these surreal moments as it relates to some of the things March sees whenever he’s drunk.

Still, it help play into the story and development of these characters as it is about these two mismatched men trying to do good in the world no matter how fucked up things are. Even as it leads to this very extravagant yet thrilling climax involving all sorts of shit where it proves that these are two guys that can get the job done. Overall, Black creates a fun and exhilarating film about two mismatched men trying to find a missing young woman.

Cinematographer Philippe Rousselot does excellent work with the film’s colorful cinematography with its usage of colorful lights for some of the scenes at night as well as some natural lighting for the scenes set in the day with the exception of the low-lit bars. Editor Joel Negron does nice work with the editing as it has some unique style in its usage of jump-cuts as well as using rhythmic cuts to play into the comedy and suspense. Production designer Richard Bridgland, with set decorator Danielle Berman and art director David Utley, does brilliant work with the look of the different houses and places the characters go to as it play into the world of the late 1970s. Costume designer Kym Barrett does fantastic work with the period costumes from the dresses and clothes the women wear as well as the suits that Healy and March wear.

Visual effects supervisor Josh Saeta does terrific work with the visual effects as it is mainly some set dressing to recreate the look of 1977 Los Angeles as well as some backdrops for some of the driving scenes at night. Sound designer James Harrison and sound editor Oliver Tarney do superb work with the sound in creating some unique sound effects as well as play into the atmospheres involving the parties and some of the violence. The film’s music by John Ottman and David Buckley is wonderful as it is a mixture of orchestral-based pieces with elements of funk and jazz to play into the feel of the 1970s while music supervisor Randall Poster creates a fun soundtrack that features music from the Bee Gees, Earth, Wind, & Fire, the Temptations, Kool & the Gang, Andrew Gold, America, A Taste of Honey, Climax Blues Band, Brick, KISS, Herb Alpert & the Tijuana Brass, Al Green, and Rupert Holmes.

Margaret Qualley is brilliant as Amelia as a young woman that is trying not to be found by anyone as she knows something that could cause a lot of trouble as she is full of energy as well as naiveté thinking she could do something when it’s really more complicated. Angourie Rice is amazing as Holly March as Holland’s daughter who is a lot smarter than her father as well as be the conscious of sorts as she brings a lot of energy but also some wit as she is the real standout in the film. Finally, there’s the duo of Russell Crowe and Ryan Gosling in phenomenal performances in their respective roles as Jackson Healy and Holland March. Crowe is the straight man of the two as someone that is cool with beating people up as he uses his street smart to get things done while also being very funny in a restrained manner. Gosling is definitely the funnier of the two as someone who is kind of a bumbling idiot that always screw things up despite his good intentions. Crowe and Gosling have a great sense of rapport together as they’re always fun to watch while bringing out the best in each other.

The Nice Guys is a remarkable film from Shane Black that features top-notch performances from Russell Crowe and Ryan Gosling. Along with a great supporting cast, nice visuals, and a fun premise, the film is definitely a neo-noir film that doesn’t take itself seriously while bringing in the things needed for an action-suspense film. In the end, The Nice Guys is an incredible film from Shane Black.

I missed this when it first came out but caught it on a plane and it was probably the best thing I've ever seen while in the air!

This movie was so fun. The trailer did nothing for me when I first saw it, so I was happy to be wrong about it.

I get so happy when I see reviews for this movie. I was hooked from the first trailer and it might be one of my all time favourites now!

@assholeswatchingmovies.com-Wow, that must've been an enjoyable film to watch on the plane unless they cut out some of the naughty bits.

@Brittani-This was such a fun film. I'll definitely be watching it on HBO again.

@Allie Adkins-Can we get Russell Crowe to do more comedies? He's actually quite funny. I think if he does more roles where he loosens up and relaxes in these kind of films. He can have a whole new career and not take himself so seriously.

Now I really want to see this film. I find Russell Crowe is pretty funny in comedy and it shows a really different side to him.

@vinnieh-I think Crowe should do more comedies. He's got a knack for being funny and I think it would help him career wise.

Love, LOVE this film. Gosling is quite the revelation in this one as who woulda thought he'd be such a fantastic comedian? He has excellent comic timing and a real knack for physical comedy and not afraid to look stupid. He also plays so well off of Crowe who also shows a different set of chops. He's not one you'd think to be a buddy action comedy but here is and hitting it out of the park. Great soundtrack, too.

J.D. Lafrance-Gosling is great but it was Crowe that won me over as I want to see him in more comedies. I think he is in need to do something where he can just loosen up and have fun.