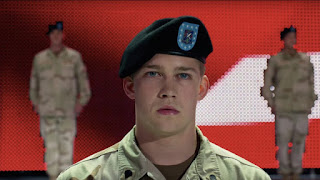 Based on the novel by Ben Fountain, Billy Lynn’s Long Halftime Walk is the story of a soldier who is taking part of a halftime show with his platoon during a football game as he deals with his time in Iraq in 2004. Directed by Ang Lee and screenplay by Jean-Christophe Castelli, the film is a look into a 19-year old soldier coping with loss and post-traumatic disorder as well as the demands he is given for being a hero. Starring Kristen Stewart, Chris Tucker, Vin Diesel, Garrett Hedlund, Makenzie Leigh, Steve Martin, and introducing Joe Alwyn as Billy Lynn. Billy Lynn’s Long Halftime Walk is a messy and overwrought film from Ang Lee.

The film follows a young private in Billy Lynn who is finishing up a two-week heroes tour around the United States as he and his platoon will be participating in the halftime show for a big Thanksgiving football game in Dallas, Texas. During the course of this day where he and his fellow soldiers are appearing at the game and be part of the halftime show with Lynn as the face of the platoon due to his heroism in Iraq. Yet, he is coping with the loss of his platoon sergeant he was trying to save that was captured on video as well as unsure if he wants to return to Iraq with his squad as his sister wants to take him to a hospital to be treated for post-traumatic stress disorder. Jean-Christophe Castelli’s screenplay does explore the sense of trauma that Lynn is enduring as well as the struggle he’s facing as there’s also a movie deal on the line. Unfortunately, there’s so much that is happening in the story that it ends up being a very jumbled mess with a narrative that moves back and forth from Lynn’s time in Iraq as well as what he’s dealing with inside this dome in Dallas.

Much of the film has Lynn looking back at certain events as well as deal with uncertain futures as it relates to a cheerleader named Faison (Makenzie Leigh) that he meets and falls for while thinking about the time he had with his family a few days earlier as his sister Kathryn (Kristen Stewart) implores him to seek medical help. The usage of flashbacks and going back into the present as it play into Lynn’s own emotional anguish ends up being a dramatic crutch that goes overboard. Especially where Lynn would see one thing and think of something back in Iraq as it gets repetitive while the scene where Lynn is at home are told more simply despite some of the heavy-handed politics that Kathryn is spewing as she is the reason Lynn joined the army as a way to not go to jail over destroying her boyfriend’s car. It’s not just the narrative that suffers but also some of the characters with the football team owner Norm Oglesby (Steve Martin) being this embodiment of wanting to sell the idea of American patriotism and urge Americans to support the War of Iraq as he’s just a caricature.

Ang Lee’s direction does have some nice moments visually in some of the scenes set in Iraq that is shot mainly in Morocco while the scenes in Dallas and parts of Texas is shot in Locust Grove, Georgia with the dome shot at the Georgia Dome in Atlanta. Much of Lee’s direction is straightforward in the close-ups, medium shots, and wide shots where he captures the scope of this dome to emphasize the magnitude of the Thanksgiving football game which is tradition in America as is the big halftime show. The scenes set in Iraq do have bits of style in its approach to some of the gunfights as well as some gorgeous compositions of Lynn conversing with his superior in Sgt. Shroom (Vin Diesel) who is this poetic individual that finds beauty in some of the harshest places in the world. It’s one of the highlights in the film that is unfortunately bogged down by not just a bad script but also some unfortunate visual decisions made by Lee in a film that emphasizes a lot on grand visuals.

The scenes set at the football stadium is where some of the visual aspects of the film become problematic where a small scene of Lynn and his platoon throwing footballs playfully is obviously meant for the 3D format as it’s just a waste of a scene. Another scene in which Lynn meets football players in the locker room looks really bad as it’s as if they added some visual effect background for scenes behind Lynn and a few football players. Then comes the big halftime show where it is meant for this high frame rate technology as it is this grand moment but it feels very bloated along with a few montage shots of flashback scenes as it is truly a lackluster moment. That is followed by some dramatic moments that do become heavy-handed including its ending which is obvious but never brings any surprises. Overall, Lee creates a messy and overblown film about a soldier dealing with loss and horror while being the centerpiece of a lame halftime show.

Cinematographer John Toll does excellent work with the film’s cinematography from the way the interior of the dome looks as well as the scenes set in Iraq as it does display the sense of beauty of the location despite the chaos of war. Editor Tim Squyres does good work with the editing as it has some stylistic usages of dissolves and jump-cuts though the montage towards the ending is really one of the most nonsensical and overwrought moments of the film. Production designer Mark Friedberg, with set decorator Elizabeth Keenan plus art directors Kim Jennings, Thomas Minton, Gregory S. Hooper, and Aziz Rafiq, does fantastic work with the interior of some of the rooms in the dome as well as the look of Lynn’s family home. Costume designer Joseph G. Aulisi does nice work with the costumes from the look of the uniforms and camouflage the soldiers wear to the skimpy cheerleader uniforms modeled after the Dallas Cowboys cheerleader clothes.

Hair stylist Rita Troy and makeup artist Jay Wejebe do terrific work with the scars on Kathryn’s face and body to play into her own encounter with chaos as a reminder of why Lynn joined the military. Visual effects supervisor Mark O. Forker does some terrible and wobbly work with some of the film’s visual effects in the scenes at the dome including that one scene of Lynn meeting the football players at the locker room where it just looks bad. Sound designer Eugene Gearty does superb work with the sound in the way some of the gunfire and rockets sound as well as the atmosphere of the dome during the game. The film’s music by Mychael and Jeff Danna is wonderful for is mixture of lush orchestral music along with ambient and country-folk pieces with the latter playing into Lynn’s home in rural Texas.

The casting by Avy Kaufman is pretty good despite the script’s shortcomings in giving the actors some effective performances as it include some notable small roles from Tim Blake Nelson as some contractor talking to the soldiers during a lunch, Dierdre Lovejoy and Bruce McKinnon as Lynn’s parents, Laura Lundy Wheale as Lynn’s older sister Patty, and Ben Platt as a liaison personnel accompanying the troops to events. In the roles as members of Lynn’s platoon, there’s Mason Lee as Theodore Yang, Barney Harris as Kenneth Sykes, Ismael Cruz Cordova as Sgt. Antonio Holliday, Brian Vaughn “Astro” Bradley Jr. as Lodis Beckwith, Arturo Castro as Mango Montoya, and Beau Knapp as the shell-shocked “Crack” Koch who reacts badly to a pyrotechnic as they all do some fine work.

Makenzie Leigh is alright as the cheerleader Faison as a young woman who takes a liking to Lynn though it’s a role that has her just being some love interest without much depth. Steve Martin’s performance as the Dallas football team owner Norm Oglesby has its moments in showing how devious he is but it’s a mixed bag due to the fact that he’s a caricature that is trying to be endearing but wants a big payday out of the story in this idea of patriotism. Chris Tucker’s performance as the platoon’s agent Albert is actually superb for the fact that he is someone that is trying to make sure the guys get paid as well as getting a chance for their story to be told in the right way. Garrett Hedlund is excellent as Staff Sergeant David Dime as a no-nonsense soldier that is making sure the platoon is on point while being very suspicious about Oglesby’s intentions for the film.

Vin Diesel is brilliant as Sgt. Shroom as Lynn’s superior that is kind of a fraternal figure for Lynn and the soldiers as he would also be the source of grief for Lynn. Kristen Stewart is amazing as Lynn’s sister Kathryn who is not happy that her little brother has to join the military because of what happened to her as she is consumed with guilt and later concern for his well-being as she hopes he can stay home and not serve. Finally, there’s Joe Alwyn as the titular character in a performance that can be described as OK where he can do a Texan accent and display the needs to be tough in war but he is hampered by the film’s script in having him be emotional where it’s overdone and he has to do so much to carry the film where he’s not really up to the task.

Billy Lynn’s Long Halftime Walk is a terrible and overblown film from Ang Lee. Despite some superb performances from Vin Diesel, Kristen Stewart, and Garrett Hedlund along with a few nice visuals. It’s a film that wants to be so much as well as display new technological tools for the medium of film where it ends up doing nothing for a story that is just heavy-handed. In the end, Billy Lynn’s Long Halftime Walk is just a bad film from Ang Lee.

This one didn't appeal to me at all. Ang Lee tends to leave me cold so I may give this one a pass all together.

@Wendell-For me, this is Ang Lee's worst film. The trailer definitely turned me off as it looked like a bad Oscar-bait film. I watched it just out of curiosity and to see how bad it is. There's some things that are good but it's not enough to overwhelm a lot of its faults as well as the fact that it tried to use some lame technology for a big sequence that is just dumb.

Yeah, this wasn't for me either. I agree, it's messy and overblown. I do commend Lee for trying something new with visual format, but story has to come first, not 3D and 120fps technology. Still, I would've been interested to see this in the theater at the format Lee intended it to be seen.

@Alex Withrow-I have no idea what is the fascination with 3D and high frame rates. There's not a lot of theaters that can do that and if there was a chance to see it in Lee's intended format. I'm sure it was a fucking waste of time. Story must come first yet it never really goes anywhere.