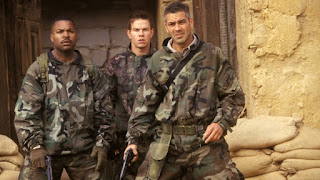 Written and directed by David O. Russell from a story by John Ridley, Three Kings is the story of four U.S. soldiers who plot a heist to steal gold from Saddam Hussein during the end of the 1991 Gulf War. The film is an unconventional war film in which four different men try to do something after the war in the hopes they can get home to better lives only to deal with all sorts of trouble that would also involve refugees in need of help. Starring George Clooney, Mark Wahlberg, Ice Cube, Spike Jonze, Nora Dunn, Judy Greer, Jamie Kennedy, Mykelti Williamson, Cliff Curtis, and Said Taghmaoui. Three Kings is a gripping yet exhilarating film from David O. Russell.

Set during the final days of the 1991 Gulf War and its aftermath, the film follows four U.S. soldiers who find a map in which they believe has Kuwaiti gold bullions in a bunker that belonged to Saddam Hussein as they plot to steal it to ensure a better life for themselves. It’s a film where these four men go on a mission by themselves without any kind of authority as they find the village with the gold bullions but they would also discover the village would feature some anti-Saddam dissidents who are asking for help as they would and try to deal with pro-Saddam forces despite the fact that a ceasefire had already happened. David O. Russell’s screenplay that is based on John Ridley’s original story where it explores these soldiers dealing with the aftermath of a war where there wasn’t a lot of action and coming home with not much is something the protagonists in the film are dealing with.

Leading the pack is Major Archie Gates (George Clooney) whose job is to escort TV reporter Adriana Cruz (Nora Dunn) as he is more interested in getting paid than do his job. He is joined by Staff Sgt. Chief Elgin (Ice Cube), Sgt. First Class Troy Barlow (Mark Wahlberg), and Private First Class Conrad Vig (Spike Jonze) who all want to get the bullions as they would have a friend in Specialist Walter Wogeman (Jamie Kennedy) to drive Cruz and her cameraman to a false location. Though they would find the gold bullions, they hope not to do anything else but pleas from anti-Saddam dissidents where a woman is killed by Iraqi forces who want to hold these dissidents hostage force Gates and his men to take action. Yet, it would become a big problem when Barlow is taken by Iraqi soldiers after a scuffle forcing Gates, Elgin, and Vig to retrieve him but they would have to make a deal with the dissidents who would help them but be accompanied to the Iranian border in return.

Russell’s direction is definitely stylish for the way it captures life during the Gulf War as well as the sense of danger that was emerging during the period of ceasefire in the aftermath of the war. Shot on various locations in the deserts of Casa Grande, Arizona and parts of California and Mexico, Russell aims for something that is immediate in the way soldiers deal with boredom in their lack of action as the first scene has Barlow killing an Iraqi soldier not knowing he was trying to surrender. The shot would be repeated in a cartoonish fashion where Vig describes to other soldiers what Barlow did as it just adds this air of exaggeration that the soldiers crave for since they didn’t see much action in Iraq and Kuwait. Russell would use wide shots to capture the scope of the locations yet would focus more on using medium shots and close-ups to capture some of the action in the bunker or to get a reaction from a soldier dealing with some kind of violence whether its comic or dramatic. The former would play into the lives that Barlow, Vig, and Elgin have before the war as well as an encounter with a cow on the way to the bunker that add to the film’s dark humor.

Russell’s approach to the suspense and action is stylish as he would shoot it with some hand-held cameras as well as creating some offbeat compositions to play into some of the darker moments in the film. Most notably a torture scene with Barlow having to deal with the consequences of his service in the military where he is forced to visualize what happened if he was in the shoes of the man who is torturing him. There are also these somber and sentimental moments that Russell would create such as Vig’s fascination with Islamic burials which provides a major moment in his development from this redneck who constantly says idiotic things to being a man open towards a culture that is foreign to him. It would culminate with Gates and his men accompanying these refugees in the hope they can have a better future in Iran despite its history with Iraq while Gates is also aware of the trouble he’s caused with his superiors in interfering with things he’s not supposed to be involved in. Overall, Russell creates a riveting yet intense film about a group of soldiers whose planned heist forces them to help dissidents during the aftermath of the Gulf War.

Cinematographer Newton Thomas Sigel does amazing work with the film’s stylish cinematography with the usage of grainy film footage, desaturated film color stocks, and other stylish looks to play into the craziness of the action scenes as well as in the suspense and black humor. Editor Robert K. Lambert does brilliant work with the editing with its usage of jump-cuts, slow-motion cuts, and other stylish cuts to play into the chaos of war as well as some of the suspense and its dark humor. Production designer Catherine Hardwicke, with set decorator Gene Serdena plus art directors Jann K. Engel and Derek R. Hill, does excellent work with the look of the old castles, villages, and bunkers where some of the action occurred as well as the interiors of some of the rooms where Saddam’s soldiers are stationed at. Costume designer Kym Barrett does nice work with the costumes as it is mostly straightforward from the camouflage the soldiers wear to the ragged clothes of the dissidents.

Visual effects supervisor David Sosalla does terrific work with the visual effects for the look of body parts shown from the inside of how they would react to a bullet as well as some of the action scenes. Sound editors Bruce Fortune and John Leveque do fantastic work with the sound in capturing the chaos that goes on in battle as well as the eerie atmosphere of the desert. The film’s music by Carter Burwell is superb for its low-key score that play into the drama and suspense with its mixture of Arabian music textures and orchestral arrangements while music supervisor Ralph Sall provide an offbeat soundtrack that include music from Rare Earth, the Beach Boys, Public Enemy, Chicago, Eddie Murphy, Plastic Bertrand, Snap, Johann Sebastian Bach, and U2.

The casting by Anne McCarthy and Mary Vernieu is wonderful as it feature some notable small roles and appearances from Holt McCallany as Barlow’s superior officer Captain Doug Van Meter who despises Barlow and his antics, Liz Stauber as Troy’s wife, Marsha Horan as Amir’s wife, Judy Greer as a rival journalist trying to get the story while having a tryst with Gates, Alia Shawkat as Amir’s daughter, Said Taghmaoui as an Iraqi interrogator who tortures Barlow, and Mykelti Williamson as Gates’ superior Colonel Ron Horn who doesn’t like what Gates is doing as well as suspicious in what he’s doing. Jamie Kennedy is terrific as Specialist Walter Wogeman as a bumbling soldier who is asked to accompany Cruz on an assignment to distract her from what Gates is doing as he is the film’s comic relief.

Cliff Curtis is superb as Amir as an anti-Saddam dissident who is seen bound and gagged where he helps Gates in the hopes that he can get other dissidents including his daughter to the Iranian border. Nora Dunn is fantastic as Adriana Cruz as a news reporter trying to get a major story about the Gulf War where she finds herself in a different journey where she would also make some discoveries about what is happening during the ceasefire. Spike Jonze is excellent as Private First Class Conrad Vig as a redneck soldier who idolizes Barlow as he often says dumb things and gets way over his head while realizing the reality of his situations where finds a sense of salvation in Islamic culture and their approach to death which he finds to be extremely fascinating.

Mark Wahlberg is brilliant as Sgt. First Class Troy Barlow as a soldier that is eager to come home as he deals with the lack of real action he faced where he takes part in the heist only to be captured as he deals with realities of war. Ice Cube is amazing as Staff Sgt. Chief Elgin who is kind of the film’s conscience as a man who takes part in the heist knowing what he will gain as he also copes with the reality as it relates to the dissidents. Finally, there’s George Clooney in an incredible performance as Major Archie Gates as a special forces soldier who is about to retire from the service as he sees the heist for gold bullions as a way out of not showing much only to realize the severity of where he is prompting him to take action and help these dissidents out of Iraq.

Three Kings is a tremendous film from David O. Russell. Featuring a great ensemble cast, stylish visuals, an offbeat soundtrack, and a story that plays into the fallacy of war and the need to help those in danger during its aftermath. It’s a film that doesn’t play into the conventions of a war movie as it showcases what men will do to make up for their lack of encountering action only to see the reality of a world in turmoil in the aftermath of war. In the end, Three Kings is a spectacular film from David O. Russell.

Great movie. It's been a while since I've seen it. Time for a revisit.

I really dug this movie a lot when I first watched it. I think it still holds up to this day. The cast was really good and the three leads helf their own very well. Spike Jonze proved he can be a good actor as well as a good director, and that's not always easy. I forget that Catherine Hardwick was a production designer before she made movies like Thirteen, and Lords of Dogtown

@Wendell-I've seen bits of it for years but never the whole thing. I think it's Russell's best film.

@TheVern-It does hold up and it has so much to offer. Plus, I think Catherine Hardwicke learned a lot in being a production designer in the art of filmmaking.

I've never seen this one. The only thing I knew about it prior to reading your review was that George Clooney hated working with O'Russell.

@Brittani-That was true as they got into a fight because Russell was being a dick as usual.