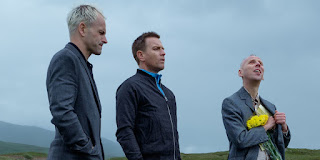 Based on novels Trainspotting and Porno by Irvine Welsh, T2 Trainspotting is the sequel to the 1996 film in which a former heroin addict returns to Edinburgh, Scotland to meet with old friends as they deal with changing times and attitudes as well as things from the past. Directed by Danny Boyle and screenplay by John Hodge, the film is an unconventional sequel that follows four men dealing with the new world as Ewan McGregor, Jonny Lee Miller, Robert Carlyle, and Ewen Bremner return playing their roles from the previous films with special appearances from Shirley Henderson and Kelly MacDonald in their old roles. Also starring Anjela Nedyalkova. T2 Trainspotting is an enthralling and exhilarating film from Danny Boyle.

The film follows four different men who have each gone separate paths in life more than 20 years after a deal that was supposed to make them rich only for one of them to leave with the money and bring ruin to their lives. Yet, Mark Renton (Ewan McGregor) returns to Edinburgh after his long 20-year exile where not only does he want to make amends but also deal with the fact that he’s returned to a world that has changed with some things that hasn’t changed. John Lodge’s screenplay doesn’t just explore Renton’s return to Edinburgh but also the fates and fortunes of his friends Simon “Sick Boy” Williamson (Jonny Lee Miller), Daniel “Spud” Murphy (Ewen Bremner), and Francis Begbie (Robert Carlyle). Sick Boy runs a failing pub while tries to blackmail top Scottish officials by filming their sexual encounters with a prostitute named Veronika (Anjela Nedyalkova) who is also Sick Boy’s girlfriend. Spud’s life is in a freefall after a failed marriage to Gail (Shirley Henderson) and being an absentee father to his son Fergus forcing him to return to heroin. Begbie is serving a 25-year prison sentence where he would escape prison.

Renton’s fortunes also haven’t gone well since he exiled himself in Amsterdam where he would also endure a fail marriage, an accounting firm that is forcing him out, and a heart attack. His return to Edinburgh forces him to deal with the fact that he not only fucked over Sick Boy and Begbie but also realize what is happening to Spud. Sick Boy decides to get revenge on Renton, despite getting back the share of the money they stole 20 years ago, with Veronika’s help but eventually realizes that there’s still some love towards his old friend as they also help out Spud. Begbie meanwhile, has a huge grudge towards Renton upon his escape from prison where the script also reveal that he has a family and does care about them despite being so brutal into everything he’s done. Renton and Sick Boy would work together to create a brothel with the involvement of Veronika and Spud but the two would know something would give as they’re bound to betray each other.

Danny Boyle’s direction is definitely stylish as it owes a lot to not just the 1996 film in terms of its visual style but also in showcasing how much Edinburgh has changed as it is a character in the film. Boyle’s usage of wide shots would capture how much the city has changed where Sick Boy lives next to a dump of destroyed cars as if a new housing development is about to emerge. Even in the usage of slanted angles where Boyle would showcase that sense of direction of where the characters are going as if their destined to go up or down. At the same time, Boyle would create compositions and shots of certain locations to match it with images of the previous film as it would evoke elements of nostalgia which is a key theme of the film visually and literally. Notably in a sequence where Renton has dinner with Veronika where he talks about the downsides of conformity and modernism in a dizzying montage where he talks about the idea of “choose life” in the 21st Century as it showcases why he, Spud, and Sick Boy are more fond of simpler times.

The film also play into the sense of melancholia as it relate to their late friend Tommy (Kevin McKidd via archival footage) in the same area where Tommy was trying to get his friends to walk to the Scottish Highlands. It’s a moment where Renton would accept the fact that he was responsible for Tommy’s descent as he would force Sick Boy to face his own tragedy and faults. It would culminate with Spud finally coming to terms with his addiction as he would channel his energy into something new as well as face Begbie who would see what Spud has created where it is this rare glimpse of humanity that seems to be lost in Begbie. Still, it does play into four men facing their own sins of the past as well as try to create something that does harken to simpler times and a balance of the past and present. Overall, Boyle crafts an evocative yet wild film about four men coming to terms with the past and their encounter with their modern environment in their search for nostalgia.

Cinematographer Anthony Dod Mantle does brilliant work with the film’s colorful cinematography with its stylish approach to scenes set in the day with its lighting and how Edinburgh would look on a sunny day as well as the scenes set at night where it play into a stylish look to emphasize the manic ride the characters would embark on. Editor Jon Harris does excellent work with the editing as its usage of jump-cuts, montages, match cuts with the original film, and other stylized cuts play into the sense of nostalgia as well as the characters dealing with the past. Production designer Patrick Rolfe and Mark Tildesley, with set decorators Orlin Grozdanov and Veronique Melery, do fantastic work with the look of Sick Boy’s apartment and pub as well as the apartment that Spud lives in to play into their lack of stability. Costume designers Rachel Fleming and Steven Noble do terrific work with the costumes as it play into the look of the characters including some of the more youthful clothes that Veronika wears.

Hair/makeup designer Ivana Primorac does nice work with the look of the characters from Sick Boy’s hair to the look of Veronika. Visual effects supervisor Adam Gascoyne does amazing work with the visual effects as it play into the air of nostalgia in the way some of the footage that the characters talk about are shown on objects and such. Sound designers Glenn Freemantle and Niv Adiri do incredible work with the sound in creating an array of sounds to play into the chaos that the characters endure in their environment as well as some of the locations they would go to. The film’s phenomenal soundtrack is a mixture of hip-hop, new wave, alternative rock, Brit-pop, ambient, drum n’ bass, rock, punk, and other types of music that features contributions from the Clash, Blondie, Underworld, Queen, Wolf Alice, Frankie Goes to Hollywood, Lou Reed, Brian Eno, Run-DMC vs. Jason Nevins, Fat White Family, Young Fathers, High Contrast, and Iggy Pop.

The casting by Gail Stevens is marvelous as it feature some notable small roles and appearances from Scot Greenan as Begbie’s son Frank Jr., Kyle Patrick as Spud’s teenage son Fergus, Charlie Hardie as the nine-year old Fergus, Pauline Turner as Begbie’s wife, Steve Robertson as a prison official who invokes Begbie’s wrath, Bradley Welsh as a rival brother owner in Doyle, Michael Shaw and Elijah Wolf in their respective roles as the 20-year old and nine-year old versions of Tommy, the trio of Christopher Mullen, Daniel Smith, and Daniel Jackson as younger versions of Begbie, James McElvar and Logan Gilles as the younger versions of Sick Boy, Aiden Haggarty and John Bell as the younger versions of Spud, the trio of Connor McIndoe, Ben Skelton, and Hamish Haggerty as the younger versions of Renton, and novelist Irvine Welsh reprising his role as Mikey Forrester who has become a black markets dealer. James Cosmo and Shirley Henderson are terrific in their brief appearances in their respective roles as Renton’s father and Spud’s former girlfriend Gail.

Kelly Macdonald is fantastic in her brief appearance as Renton’s former girlfriend Diane who has become a solicitor as she tries to help Renton and Veronika over Sick Boy’s legal and financial troubles while seeing what Renton had become. Anjela Nedyalkova is wonderful as Veronika as a Bulgarian prostitute who is Sick Boy’s girlfriend that becomes concerned with Sick Boy’s schemes while having an affair with Renton and befriending Spud whom she sees as someone that has a lot more to offer as a person in need of help. Robert Carlyle is brilliant as Francis Begbie as a psychopath who is hell-bent in getting out of prison to continue his life as a criminal where he also seeks revenge on Renton for putting him in prison where Carlyle also show a bit of vulnerability into the character as he would also briefly play a dual role as drunken man he met many years ago.

Ewan Bremner is amazing as Spud as a man who endured a lot of misfortune to the point that he’s hit bottom as he struggles to be clean and find a new outlet which he would eventually find as a way to come to terms with his faults and a new promise in his life. Jonny Lee Miller is remarkable as Sick Boy as a man who continuously schemes to get what he wants as well as deal with a cocaine addiction and his anger towards Renton where he tries to find a way to get even with him only to realize how much he needs Renton to get things done. Finally, there’s Ewan McGregor in an incredible performance as Mark Renton as a man who returns to Edinburgh following a 20-year exile where he deals with his own brush with death as he tries to figure out what to do with the remaining years of his life as well as make amends for his past sins in the hope he can redeem himself and find some idea of life he can live in.

T2 Trainspotting is a sensational film from Danny Boyle that features great performances from Ewan McGregor, Ewan Bremner, Jonny Lee Miller, and Robert Carlyle. Along with its supporting cast, dazzling visuals, approach to nostalgia, and a killer soundtrack, it’s a film that manages to capture the spirit of its predecessor while not being afraid to use that film as a reference point in order to explore its characters who are still hung on to the past. In the end, T2 Trainspotting is a phenomenal film from Danny Boyle.

I was curious to see the gang years later, and the No More Catholics scene is fun. Though in my heart of hearts I'm not sure the sequel needed to exist. A decent watch, but I felt it relied too much on homage. Lacked the sustained energy and originality of the 1996 film.

@Chris-I didn't mind the need of homage as I think it helped to play into the characters searching for something that was simpler. People forget that in the original film, the characters were living in the past as they didn't really listen to anything new while talking about Bond films of the past and football players. It helps add to the sense of bewilderment of Renton's return to Edinburgh as it had changed and he's kind of taken aback by it while the "choose life" sequence is really a call against 21st Century modernism which I'm on board with.