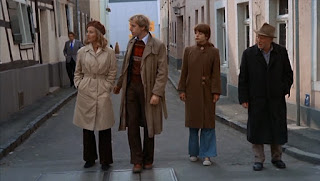 Based on the novel Wilhelm Meister’s Apprenticeship by Johann Wolfgang von Goethe, Falsche Bewegung (Wrong Move) is the story of a writer who leaves his hometown where he meets other travels to seek some inspiration as well as trying to create a new identity. Directed by Wim Wenders and screenplay by Wenders and Peter Handke, the film is the second film of a trilogy of road movies where a man tries to find new adventures on the road. Starring Rudiger Volger, Hanna Schygulla, Hans Christian Blech, Ivan Desny, Marianne Hoppe, Peter Kern, Lisa Kreuzer, and introducing Nastassja Kinski. Falsche Bewegung is an entrancing yet somber film from Wim Wenders.

Trying to find inspiration as a writer, the film follows a man who decides to leave his hometown where he travels through Germany where he meets other travelers during his journey as he questions his own existence. It’s a film with a simple yet minimalist premise that doesn’t have much plot yet it is more of a study of isolation and a journey to find meaning through traveling across the country. The film’s screenplay by Wim Wenders and Peter Handke follows the writer Wilhelm Meister (Rudiger Volger) who is hoping to create something yet feels stuck living with his mother (Marianne Hoppe) where he decides to go on a trip around Germany for ideas.

The script does have a structure as it play into Meister’s trip as the first act is him meeting fellow travelers in an actress Therese Farner (Hanna Schygulla), an aging Olympian in Laertes (Hans Christian Blech), and his teenage mute companion in Mignon (Nastassja Kinski). They’re later joined by an Austrian in Bernhard Landau (Peter Kern) where the second act has them staying at the home of an industrialist (Ivan Desny) who is grieving the loss of his wife while the third act is set in Frankfurt as it would play into Meister’s sense of isolation with a world that is becoming modernized.

Wenders’ direction is definitely intoxicating for the compositions he creates throughout the course of the film. Notably in the usage of the wide shots where it opens with a helicopter shot of Gluckstadt as it’s raining to play into a world that is quaint and has a traditional look which isn’t an environment for Meister to find some sort of inspiration. The usage of the wide and medium shots doesn’t just play into the moments of traveling where Meisler travels to Bonn via train with Laertes and Mignon but also in this mixture of a world that has old traditional buildings mixed in with something that is new yet retaining its forests and natural settings. Notably in a scene where Meister, Farner, Laertes, Mignon, and Landau are all walking on a roadside mountain looking at the surroundings where Wenders would create these gorgeous images that has Meister and Laertes conversing in the foreground in a medium shot while everything else is happening in the background in a wide shot.

Wenders’ direction also uses the medium shots and close-ups for the scenes set inside the train as well as some of the moments where the characters interact including a scene with the industrialist who talks about his own sense of loss. These conversations and intimate scenes that include a strange encounter with Mignon add to Meister’s fascination with humanity as he tries to write things down. Particularly his conversation with Laertes who is a mysterious individual who ran at the 1936 Olympics while also having a darker past which would disturb Meister who becomes troubled by how Laertes uses Mignon. The film’s third act set in Frankfurt has Wenders showcase a world that is different from Bonn and Gluckstadt which is chaotic and filled with lots of people living in this rapid-pace society that would overwhelm Meister to the point that he questions his existence and worth. Overall, Wenders crafts a ravishing yet haunting film about a man’s journey through Germany in an attempt to find inspiration and an identity.

Cinematographer Robby Muller does amazing work with the film’s colorful cinematography as it captures the beauty of the locations in the exterior settings including the city lights at night along with low-key lights for some of the interiors. Editors Peter Przygodda and Barbara von Weitershausen do brilliant work with its usage of jump-cuts and dissolves to help play into the sense of wonderment that occurs throughout the film. Wardrobe by Heidi Ludi does nice work with the costumes with Mignon being the most fashionable from her colorful sweater and overalls that she wears every day as well as what she wears at a house. The sound work of Martin Muller and Klaus Peter Kaiser is superb for its natural approach to sound as how noises sound from afar to the sounds of the city. The film’s music by Jurgen Knieper is brilliant for its low-key yet plaintive score with its mixture of strings and guitars to play into the melancholia while the soundtrack features bits of classical music and a rock song from the Troggs.

The film’s wonderful cast include a few notable small roles from Marianne Hoppe as Wilhelm’s mother and Lisa Kreuzer as Wilhelm’s girlfriend Janine. Ivan Desny is terrific as the industrialist as a man living in a castle that is in ruins as he deals with loss while welcoming the idea of people at his home for a day. Peter Kern is superb as Bernhard Landau as an Austrian traveling in Germany as he hears Meister recite poetry as he wants to be a poet where he joins them on the journey through the country. Hans Christian Blech is fantastic as Laertes as a former Olympian with a dark past as he works as a con artist where he copes with his ailing health and the changes around the world.

Nastassja Kinski is brilliant as Mignon as a teenage mute street performer who never says a word yet manages to do a lot in terms of her physicality as well as display a complex innocence to her character. Hanna Schygulla is amazing as Therese Farner as an actress traveling through Germany as she is returning home to Frankfurt while dealing with the demands of her job. Finally, there’s Rudiger Volger in an excellent performance as Wilhelm Meister as an aspiring writer trying to find inspiration through this trip through Germany where he deals with his surroundings as well as questioning his work and identity as it’s one of his finest performances.

Falsche Bewegung is an incredible film from Wim Wenders. Featuring a phenomenal cast, entrancing visuals, an intoxicating music soundtrack, and themes of identity and loneliness on the road. It’s a film that explores a group of people traveling through Germany as they deal with themselves and their environments on a trip to the unknown. In the end, Falsche Bewegung is a remarkable film from Wim Wenders.

This might just be the antidote to his latest!

I haven't seen nor heard of this one either. The plot kind of sounded like a German On The Road? I'm sure it's different but that's what it reminded me of.

@Jay-I'm aware that some of his recent films are hit/miss but a lot of the stuff he did from the 70s to the early 90s is largely on-point.

@Brittani-I wouldn't say it's a German version of On the Road as it's more based on another book but deviates a lot from its source. It's really part of a trilogy as I'm finishing up the last film of the series.