For the 44th week of 2018 as part of Wandering Through the Shelves' Thursday Movie Picks series hosted by Wanderer. We delve into the subject of gangsters as it’s often a popular theme in films about a bunch of people wanting to make money by killing anything and anyone as well as live the good life. Of course, it’s a subject that will have films that are often talked about over and over again as my three picks are based on wanting to do something different as well as provide some exposure to the work of Jean-Pierre Melville. Here are my three picks of three films by Melville that I’ve seen so far: 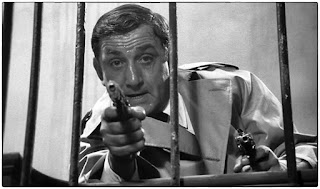 An escaped criminal is being pursued by a police inspector while he is given the chance to do one final job with a bunch of gangsters to steal platinum bars for a crime boss. It’s a film filled with a lot of complexities in the role of the gangster but also a type of code they all have to honor. Still, there is no honor among thieves as a heist that offers so much can prove to be just as troubling as it is one of Melville’s finest films despite not being seen often in comparison to his other films. 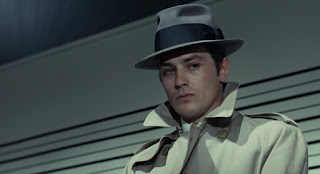 While it’s more of a character study about a hitman who lives by a code that keeps him out of trouble, it is still set in the world of the gangsters. Yet, it’s a film that has Melville take inspiration from the samurai films of Akira Kurosawa as it is an offbeat yet entrancing film that plays into a man trying to maintain an anonymity that is becoming harder to live by as he’s being pursued by a police superintendent. Featuring an incredible performance Alain Delon in the titular role, it is one of these films that is a must-see for anyone interested in the world of crime films. 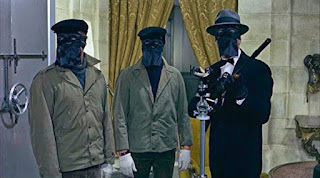 Two criminals meet up and join forces with a former police officer as they plan a robbery in the hopes to get rich yet they’re dealing with all sorts of problems during this journey leading up to the robbery. One of the criminals is still in pursuit by the police while the former cop who is a marksman is dealing with alcoholism as they’re all trying to keep it together. It’s an unconventional gangster film of sorts yet it is one of the finest that definitely strays from the conventions of the genre that includes this thirty-minute heist sequence that is so meticulous in its attention to detail as it doesn’t feature a lot of dialogue. Still, it is a moment of suspense told with such precision and subtlety by Melville.

I've seen and liked both of the first two which look at crime in ways that are quite different. The third is on my list but I haven't gotten there just yet.

SO many choices for this week. My solution was to focus on one actor who was representative of the genre, James Cagney, and pick three of his films that I enjoyed.

The Public Enemy (1931)-Tom Powers (Cagney-in the role that made him a major star) is a small-time hood, vicious and consciousless who climbs to success on the back of Prohibition and his willingness to do whatever necessary-rob, maim, kill-to gain advantage. The film chronicles that rise, and fall, as well as his entanglement with two women Gwen (Jean Harlow, this was one of her earliest appearances, don’t judge her on it-she’s awful-look to her MGM comedies where she’s great) and Kitty (Mae Clarke) who famously receives a grapefruit in her kisser when she mouths off to Cagney. This William Wellman directed picture is one of the formative films in creating the gangster drama.

The Roaring Twenties (1939)-Eddie Bartlett (Cagney), George Hally (Humphrey Bogart) and Lloyd Hart (Jeffrey Lynn) strike up a friendship in a foxhole during WWI. Once back in the States they go their separate ways but eventually circumstances bring them back together in the bootlegging business where they find enormous success until jealousies, rivalries and the stock market crash brings it all tumbling down. One of the last great gangster films of the 30’s with a fantastic cast including Priscilla Lane and a scene stealing Gladys George as the lovelorn songbird Panama Smith who delivers the film’s iconic last line.

Kiss Tomorrow Goodbye (1950)-Amoral gangster Ralph Cotter (Cagney) breaks out of prison along with fellow prisoner Carleton (Neville Brand).When Carlton is injured Cotter murders him to speed his escape and jumps right back into crime blackmailing Carleton’s sister Holiday (Barbara Payton) into a relationship to conceal her part in aiding their jailbreak. Discovering graft Cotter pressures a couple of crooked cops (Barton MacLane and Ward Bond) and an equally corrupt lawyer (Luther Adler) into a scheme to bilk heiress Margaret Dobson (Helena Carter) out of a fortune. Things do not go as planned. This was the highpoint of leading lady Barbara Payton’s career. A beautiful if somewhat hard looking blonde at this time she was considered a rising star but after a scandal plagued and notorious career she fell as far as it’s possible to go ending up a drug addicted skid row hooker (once being mistaken for a pile of garbage after being left next to a dumpster following a beating) before her death from organ failure at 39.

Tried watching Le Samourai two days ago for this, just not my type, haha.

But the other two seem interesting, gonna add them to my watchlist!

I have only seen one Jean-Pierre Melville film which was Army of Shadows. I do intend to catch a few others because it's so highly regarded.

I haven't seen any of your picks this week, nor anything by that director, I don't think.

I haven't seen any of these but I'm interested in seeing Le Samourai as it sounds interesting and it has Delon.

Haven't seen any of these. Le Samourai is the one I've wanted to see for a long time, though.

These sound e cellent but I never even herd of them never mind seeing them. I hope, one day, I will get the chance to see them