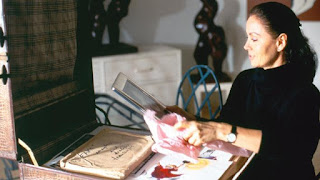 Directed by Oja Kodar and Vassili Silovic and written by Silovic and Roland Zag, Orson Welles: The One-Man Band is a documentary film about the numerous unfinished and unreleased films made by Orson Welles from 1965 to his death in 1985. Told mainly by Kodar who was Welles’ artistic and personal partner, the film chronicles the many films Welles was unable to finish including his attempted comeback film The Other Side of the Wind which was completed in 2018 just 23 years after the release of this documentary. The result is a mesmerizing and engrossing film from Oja Kodar and Vassili Silovic.

Throughout the career of Orson Welles as a filmmaker, he had only released 13 completed features in his lifetime yet there were many projects that he made that were either unfinished or unreleased. The most notable being his attempted comeback film The Other Side of the Wind as production began in 1970 and shooting completed in 1976 as attempts to finish had been mired by legal, financial, and political issues. The film is about the numerous projects that were unfinished and unreleased from the 1960s to his final year in 1985 as they’ve been compiled and kept by his collaborator and life partner Oja Kodar in Los Angeles. Kodar would be interviewed throughout the film as she would show co-director Vassili Silovic and others some of the footage and such of the films that Welles was unable to finish including early snippets of The Other Side of the Wind before its eventual completion in 2018.

With narration by Francois Marthouret in French who would provide insight into the many projects that Welles would make during his lifetime that were either unfinished or unreleased. Among them was a trailer for F for Fake which was a nine-minute presentation of the film for its American release but was rejected by its distributor as it wouldn’t be seen until the 2000s when the trailer was released as an extra for the film’s DVD/Blu-Ray releases. Other projects that Welles had been unable to finish include a comedy short called One Man Band that had Welles in sketches playing various parts as it kind of represents his one-man idea to create the films by himself and with whatever he had as it would include appearances from Charles Gray. Another project with Gray that Welles did was a TV film version of William Shakespeare’s The Merchant of Venice that had Welles play Shylock in the film yet it widely considered an unfinished film due the fact that some of the footage is missing and was unreleased in its unfinished form until 2015 when it premiered at the Venice Film Festival that year.

Kodar and Silovic would maintain something straightforward through the scenes of the former discussing many of Welles’ unreleased work in scenes where she’s driving around Los Angeles or at the homes Welles previously owned in Los Angeles and Spain with cinematographer Thomas Mauch at the helm shooting the interviews. The scenes also include shots of editing machines showing many of Welles’ unreleased work including a suitcase that he would carry whenever he traveled that included a camera, some film stock, a picture frame, and an editing machine. This was something Welles would do often as it included an attempted film version of Moby Dick that had Welles recite many of the passages from Herman Melville’s book as well as the long-decade work on Don Quixote that remains unfinished.

Editors Edward G. Norris and Marie-Josephe Yoyette along with Sound editor Hans Kunzi would compile many of the clips of Welles’ unreleased work as the reason many were unfinished and unreleased were due to financial reasons while another project in The Deep that starred Welles, Kodar, Jeanne Moreau, Laurence Harvey, and Michael Bryant which was meant to be a commercially-based film from Welles. Yet, the reason it remained unfinished and unreleased was due to Harvey’s death in 1973 forcing Welles to abandon the film. Projects such as a follow-up to Filming Othello in Filming the Trial and The Dreamers as the latter was based on the works of Karen Blixen which had Welles and Kodar do the film at Welles’ home. The film’s music by Simon Cloquet is wonderful for its lush orchestral score that play into the mystique that is Welles as well as the melancholia into the projects he had been unable to finish yet leaving behind a legacy that is unmatched.

I didn't know this existed. I'm going to find it and give it a go.

I think it's available on YouTube as I actually have the film as a bonus feature from the Criterion DVD set for F for Fake as I would totally see it if you're interested in Orson Welles as I'm now watching the other documentary on Welles that Netflix has released.