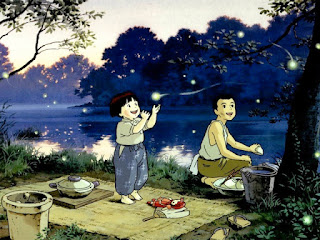 Based on the semi-autobiographical short story by Akiyuki Nosaka, Grave of the Fireflies is the story of two siblings trying to survive and fend for themselves during the final days of World War II in Japan that includes the chilling encounter of the firebombing of Kobe. Written for the screen and directed by Isao Takahata, the film is a coming-of-age story set amidst the final days of Japan’s time in World War II as they deal with the war and the lack of humanity they endure. Grave of the Fireflies is a ravishing yet heart-wrenching film from Isao Takahata.

Set during the final days of World War II in the small Japanese town of Kobe during its firebombing, the film revolves around a young boy and his little sister trying to survive the war as their father is away on war and their mother horribly injured from the firebombing leading them to fend for themselves. It’s a film with a simple story though Isao Takahata’s screenplay has an offbeat narrative largely due to the fact that it doesn’t have a conventional beginning nor its ending as it’s told largely by the character of Seita (voice of Tsutomu Tatsumi) about what he and his little sister Setsuko (Ayano Shiraishi) would endure during the firebombing of Kobe and its aftermath. Yet, much of its narrative is straightforward as it play into the Seita and Setsuko dealing with air raids and the firebombing as they would live briefly with their aunt (Akemi Yamaguchi) who isn’t fond of having them around and becomes resentful towards them due to their lack of contributions at her home.

Takahata’s direction is full of wondrous imagery as well as images of war that are disturbing such as the images of American planes dropping firebombs as the attention to detail is immense. With the aid of animation director/character designer Yoshifumi Kondo, Takahata does open the film with bleak images set in the aftermath of the war where it is as if the world is starting to rebuild but not everyone is thriving. The presentation of 1945 Kobe as this small town with farmland nearby and all sorts of things as Takahata shows something that is idyllic yet it feels off by this idea of nationalism during a time when Japan was losing the war. Much of Takahata’s compositions are full of gorgeous imagery of that city yet when the aftermath of the destruction of war is one of the most startling images shown on film with some unique lighting by cinematographer Nobuo Koyama and the art direction Nizo Yamamoto. Notably in the scenes involving fireflies as they are this source of innocence and wonder for both Seita and Setsuko during the most trying of times.

Takahata’s direction also has these compositions and images that do play into this air of innocence during its second act where both Seita and Setsuko leave their aunt’s home to live in this cave where it seemed like things would be great. Yet, there is that reality of war that still looms but also this disconnect into what Seita has yet to know about what is going on. Even where he learns about what happened in the third act as it would definitely impact the struggle that Seita would endure as well as food shortage and illness for himself and Setsuko. It would play into this air of hopelessness and despair given the circumstances of what happened to Japan at the end of World War II but also the growing sense of inhumanity that Seita encounters. Its ending is surreal as it play into more into the aftermath of war and the peace that would emerge with Seita and Setsuko watching from afar at this new world. Overall, Takahata creates a majestic yet visceral film about two young Japanese kids dealing with the chaos of war and trying to find a decent life in the darkest of times.

Editor Takeshi Seyama does brilliant work with the editing as it is largely straightforward in playing up to some of the war scenes as well as some of the drama and light-hearted moments. Sound designer Yasuo Uragami does excellent work with the sound in the way bombs sound as well as the sounds of planes and other sound effects such as the natural sounds of nature are presented as it is a major highlight of the film. The film’s music by Michio Mamiya is amazing for its orchestral music core that does feature some upbeat themes in some of the lighter moments but also somber ones with its usage of woodwinds and lush strings as it is a highlight of the film.

The film’s fantastic voice cast feature some notable small contributions from Tadashi Nakamura in various voice roles in the film, Akemi Yamaguchi as Seita and Setsuko’s resentful aunt, and Yoshiko Shinohara as Seita and Setsuko’s mother. Finally, there’s the incredible voice performances of Tsutomu Tatsumi and Ayano Shiraishi in their respective roles as Seita and Setsuko as two young kids dealing the chaos of war and their need to find some good in the world and to have a decent life despite the cruelty of their aunt and the lack of humanity they endure as the voice roles contain some anguish but also an air of innocence.

Grave of the Fireflies is an audacious film from Isao Takahata. Featuring a great voice cast, eerie yet gorgeous images, a sumptuous music score, rich animation, and an unflinching look of life during wartime. The film is an immense yet wondrous film from Studio Ghibli in its simple story of two children trying to live and survive during the final days of World War II. In the end, Grave of the Fireflies is an outstanding film from Isao Takahata.

I had this on my very first Blind Spot list. It's so depressing. I found myself getting really annoyed with the main character's choices. I'm not sure I could watch this again.

When someone says "I don't like animated movies" or "Animated movies are for kids," this is a movie I point to. Emotionally gutting and yet beautiful at the same time. This is a masterwork, even if it's not one I would choose to watch because of just how much of an emotional wringer it is.

I haven't seen it either and didn't even realize I should!

@Brittani-I doubt I would watch it again either as well because it is heavy and a total tearjerker but I had no problem with Seita's choices given the fact that he's just trying to survive and is forced to deal with the fallacies of nationalism (something we have to learn as nationalism only leads to total destruction).

@SJHoneywell-I hate it when people say shit like that. This is a masterwork as right now, it's I think #2 in my best films of 1988 with My Neighbor Totoro at #1 though really, I'd call it a tie between both films.