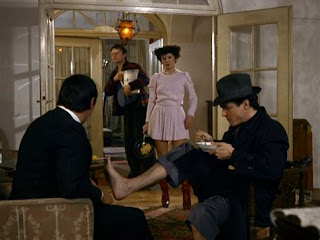 Written and directed by Rainer Werner Fassbinder, Satansbraten (Satan’s Brew) is the story of a revolutionary poet whose life is in a freefall due to debt and lack of inspiration as he borrows money from a nymphomaniac prostitute to find new ideas through the gay underground in West Germany. The film is a study of a man who is trying to re-start his career as a poet as he would explore new cultures as well as base his life on the German poet Stefan George. Starring Kurt Raab, Margit Carstensen, Helen Vita, Volker Spengler, Ingrid Caven, Ulli Lommel, Brigitte Mira, and Marquad Bohm. Satansbraten is an offbeat and whimsical film from Rainer Werner Fassbinder.

The film follows a poet who was once a revered revolutionary as his life is falling apart due to financial ruin and a disintegrating marriage while his relationship with his mistresses and prostitutes haven’t fulfilled him until a source of inspiration has him channel the works of the German poet Stefan George. It is a film that explores a man trying to re-start his career and life as a writer/poet as his life is in a whirlwind as he also wants to create anarchy where a moment of inspiration has him writing a poem yet in the style of Stefan George. Rainer Werner Fassbinder’s screenplay doesn’t have a lot of plot as it’s more of a study of the actions of its protagonist Walter Kranz (Kurt Raab) who lives in an apartment with his wife Luise (Helen Vita) and his mentally-challenged brother Ernst (Volker Spengler) as the latter likes to play with flies and expose his genitals to guests. Kranz has a few mistresses and dalliances with prostitutes in an attempt to find fulfillment yet he is eager to go into the world of crime as an act of defiance due to his writer’s block. His refusal to play into the conventions of society does give him ideas unaware that he’s borrowing heavily from Stefan George whom he would study and be inspired by his own actions.

Fassbinder’s direction does have elements of style in some of the tracking dolly shots he creates for some parts of the film as it is shot largely on location in Munich. The usage of wide and medium shots have Fassbinder capture the world of the bourgeoisie that Kranz wants to be a part of yet is considered too much of a radical to be accepted as he is also a narcissist. Fassbinder also maintains an intimacy of having much of his action take place in rooms with a lot of close-ups and medium shots to play into the drama and humor. Notably when one of Kranz’s devotees in Andree (Margit Carstensen) who is a virginal mistress from the country as she is mistreated by people in Kranz’s circle. Due to the lack of a strong plot and Kranz’s anarchist actions, the film does meander in its pacing at times as it also includes a murder mystery involving Kranz and a prostitute where the gun is missing. Fassbinder also play into some of the fallacies of Kranz’s persona as well as revelations about George as it relates to his exploration of the gay underworld in an attempt to gain more followers in the film’s third act with Andree becoming troubled by Kranz’s fanatical ideas and some revelations about him. Overall, Fassbinder crafts a messy yet wild film about a revolutionary poet trying to restart his career through the works of Stefan George.

Cinematographers Jurgen Jurges and Michael Ballhaus do excellent work with the film’s cinematography as it is largely straightforward to capture the natural look of the interior locations along with the stylish usage of candles for a couple of Kranz’s reading sessions dressed as George. Editor Thea Eymesz does terrific work with the editing as there isn’t a lot of style other than a few rhythmic cuts to play into the humor. Art directors Kurt Raab and Ulrike Bode do amazing work with the look of Kranz’s apartment home and the places he go to with Bode creating some lavish costumes for some of the clothes the women wear as well as a costume that Kranz wears as George. The sound work of Rolf-Peter Notz and Paul Scholer is superb for the way music is presented on location as well as the emphasis on natural sounds for the scenes set in a room or in a certain place. The film’s music by Peer Raben is wonderful for its orchestral score as it has some upbeat themes as well as some somber pieces to play into some of the drama.

The film’s brilliant cast feature some notable small roles from Armin Meier as a gay hustler, Brigitte Mira as an old lady Kranz turns to for money, Ulli Lommel as the private detective Lauf, Katherina Buchhamer as a nymphomaniac lover of Kranz, Y Sa Lo as an Asian lover of Kranz, Marquad Bohm as a friend/husband of one of Kranz’s mistresses who takes a liking towards Andree, Ingrid Caven as a posh lover of Kranz who would also take a liking towards Andree, and Volker Spengler as Kranz’s mentally-challenged brother Ernst who likes to expose himself and play with dead flies. Helen Vita is excellent as Kranz’ wife Luise as a woman who feels unloved and always tending to him as she feels neglected and mistreated to the point that she becomes ill where only Ernst and later Andree takes notice.

Margit Carstensen is amazing as Andree as a woman from the country who is a devotee to Kranz as she does whatever she can to help him despite putting herself in awful situations to the point of abuse as she later have revelations about the man she is devoted to. Finally, there’s Kurt Raab in an incredible performance as Walter Kranz as a revolutionary writer seeking to restart his writing career after some setbacks where Raab brings a lot of energy despite the fact that his character is a fucking asshole who only cares about himself with little regard for those who care about him.

Satansbraten is a stellar though flawed film from Rainer Werner Fassbinder that does feature amazing performances from Kurt Raab and Margit Carstensen. Along with its ensemble cast and offbeat tone, it’s a film that explores a man trying to mirror the ideals of a great German poet unaware of his personal life. While it is messy due to its lack of a strong plot, it is still a fascinating character study that explore a man and his narcissism as he is eager to become great again despite his many faults. In the end, Satansbraten is a superb film from Rainer Werner Fassbinder.

Never heard of this one but sounds cool. Ali: Fear Eats the Soul has been on my watchlist forever. Now, I have 2 movies to watch.

Well, this film for me is minor Fassbinder so far as it's quite obscure but I managed to watch it on Turner Classic Movies. Ali: Fear Eats the Soul, World on a Wire, and The Bitter Tears of Petra von Kant are the ones I totally recommend to watch as there's a lot of his films I had seen. He made more than 30 films in the span of nearly 15 years and was aiming for 40 until his death in 1982. The dude didn't stop working.