Against the Crowd Blog-a-thon 2020 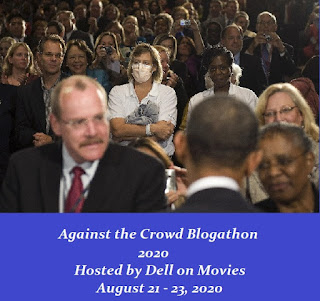 It’s August which means that it’s time once again the annual Against the Crowd Blog-a-thon hosted by Wendell of Dell on Movies. Having participated in this event for the past five years, it’s a chance to go against everyone and be on your own as it’s something I like to do as my contributions in these past years have been really fun as anyone who hasn’t participated should cite my contributions from 2015, 2016, 2017, 2018, and 2019. Here are the rules with a few updates for this year’s edition:


• Pick one movie “everyone” loves (the more iconic, the better). That movie must have score of 75% or more on rottentomatoes.com (or at least 7.5 on imdb.com). Tell us why you hate it.

• Pick one movie that “everyone” hates (the more notorious, the better). That movie must have a score of 35% or less on rottentomatoes.com (or 4.0 or less on imdb.com). Tell us why you love it.

• Include the tomato meter scores of both movies.

• Use one of the banners in this post, or feel free to create your own (just include all the pertinent details), or just mention this blogathon if using an audio or visual medium.

• Let us know what two movies you intend on writing, vlogging, posting, or podcasting about in one of the following ways: Comment on this or any ACB 2020 post on this site, tweet me @w_ott3, or e-mail me at dellott@yahoo.com.

• Publish your post on any day from Friday, August 21 through Sunday, August 23, 2020, and include a link to this announcement. If you’re a podcaster or YouTuber that is interested in participating just talk about your chosen movies during your closest podcast and/or video to those dates and mention that you are taking part in this blogathon.

• If posting on social media, use the hashtag #AgainstTheCrowd2020 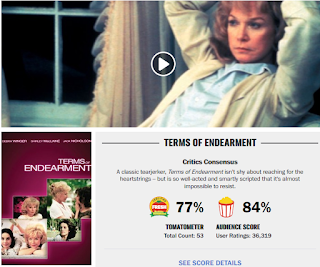 I don’t understand the adulation that James L. Brooks have other than his work as a producer as he does deserve some praise for his work on television as shows like The Mary Tyler Moore Show, The Simpsons, Taxi, and other shows while launching the careers of filmmakers such as Wes Anderson and Cameron Crowe. Other than that, why do people think he’s a big deal in the world of film? He’s only made one film that I liked that is Broadcast News which was a different film in comparison to everything else he did. Other than that, a lot of them have a lot of overwrought sentimentality that is just sappy and manipulative. He’s only made six films in his career so far yet half of them have not been well-received as the last film he did in How Do You Know was trashed by the critics and was a massive box office flop. Spending $120 million for a lame rom-com plus $30 million in marketing is just irresponsible.

Having already trashed As Good As It Gets back in 2016, it’s time to trash the film that made him famous and won a bunch of Oscars including Best Picture. It’s a drama about a relationship between mother and daughter that spans for 30 years as it is full of drama and all sorts of shit with Shirley MacLaine being possessive prompting her daughter in Debra Winger to rebel and wanting a life of her own despite the fact that the man she married is a total pussy and cheats on her as she would cheat on him. MacLaine would go into a relationship with Jack Nicholson that is all over the place where it wants to be funny but the humor feels forced while it gets extremely sappy towards the end. This is the film that beat The Big Chill and The Right Stuff for Best Picture and Brooks beat the likes of Ingmar Bergman and Mike Nichols for Best Director? Oscars definitely fucked up that year. 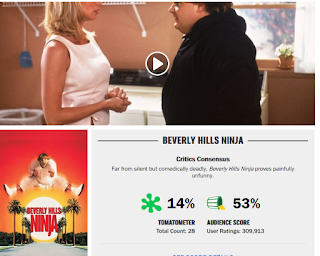 In his lifetime, Chris Farley has only been in two films that were well-received as a lot of the films he did weren’t exactly favorites with the critics though there were a few that did like his approach to physical comedy. Yet, the characters he played are these naïve, well-meaning, underachieving slackers who are actually kind people despite the fact they also have a temper. Farley knew his limits but he was good at what he did and knew how to bring the laughs. In this 1997 film directed by Dennis Dugan who also had a career of poorly-received films despite such films like Problem Child, Brain Donors, Happy Gilmore, Big Daddy, and Saving Silverman that are actually really good films. This film about a white orphan boy who is raised by ninjas as he is eager to be this legendary Great White Ninja yet also aspires to be revered like his adopted older brother. When an American woman comes to the monastery asking for help, Farley travels to Beverly Hills to help her and hilarity ensues.

The film also features Chris Rock as a bellboy who is amazed by Farley’s ninja skills as he is eager to become a ninja as the scenes with Farley and Rock are a joy to watch while Robin Shou does a great supporting performance as Farley’s adopted older brother who is surprisingly quite pretty when he’s dressed up like a woman. The laughs never stop as it often finds a way to be funny with Farley also showing he has range as he is someone that knows that he’s not as skilled as other great ninjas but has a lot of heart. It’s a film that needs to be re-evaluated yet it does get praise from one of cinema’s great actors in Christian Bale.

Weirdly, I haven't seen either one of these. I've purposely avoided Terms of Endearment. It just seemed exactly as you described it, way too sappy. Chris Farley was never my cup of tea on SNL, so I just never bothered with his movies. I keep saying I'll watch them one day. Thanks for joining again!

I love Brooks. But I also love Farley.

I did not like Terms of Endearment at all. In fact, the first time I watched it, I didn't get more than 90 seconds before I rage-quit.

I think for people who like the style, it's not bad, but if you don't specifically like the "mothers and daughters and bad marriages and disease and melodrama and infidelity and hospitals and..." genre, boy, does it suck hard.

I've never seen Terms of Endearment, but I loved Beverly Hills Ninja when I was younger. I Haven't seen any of Farley's films in years, so I don't know how they hold up, but they were staple in my life when I was young.

I can’t stand Chris Farley and dint find anything he did funny except for that one sketch with Patrick Swayze. As for Terms of heavement...yeah...sappy and irritating. The biggest fun is reading about the behind the scenes antics of Winger and MacLaine

I remember watching Terms of Endearment when I was very young! Mostly because my mom was watching it and I happened to be home. My mom *sobbed* through it so I opted not to watch it as an adult lol. I know they're 2 different movies but I prefer Steel Magnolias in terms of sappy mother/daughter relationship movies.

@Wendell-I'm aware that Chris Farley wasn't for everyone as he's often considered to be too low-brow but there is always at least an element in Farley that was endearing and good-hearted. The sweet nature of the characters he play is what makes those films work for me as he is always someone that meant well despite the fact that he's a goofball. I still miss the guy.

@Jay-I think Brooks is at his best as a producer and on TV. With the exception of Broadcast News, he should just stay away from film for good.

@SJHoneywell-I'm still baffled into why that film received so much praise and all of those awards as there wasn't anything technical of note to be amazed by as it was just ordinary and bland.

@Brittani-They do hold up for me as I was in my teens when I first saw them and they still make me laugh as there was an innocence to his humor. It's a shame he died so young as there was also someone in a lot of pain as I think he had some demons he couldn't deal with.

@Birgit-I'm glad to know someone didn't like Terms of Endearment either and at least you thought that Chippendales skit with Patrick Swayze is hilarious. Plus, who knew Farley could move like that.

@Sara-Steel Magnolias is the better film. Yeah, it has those things but it was actually funny. Anything involving Olympia Dukakis and Shirley MacLaine just made me laugh. Plus, it was set in the South and I'm from the South so it kind of worked for me. The same couldn't be said about Driving Miss Daisy which I fucking hate.

The few parts of Beverly Hill Ninja I've seen didn't work for me but I love Terms of Endearment. It is alot of the things you say but the acting saved it for me.

I agree that As Good As It Gets is complete and utter garbage though. There's one movie that gets my bile up.

@joel65913-I thought the acting in that film was over the top.

I was a kid when seeing Terms and don't remember much other than Huckleberry Fox crying in the hospital. If memory serves correctly I believe John Lithgow played the man that has the affair with Debra Winger; it'd be interesting to see one of his earlier performances so I might give this a rewatch one day and see if anything strikes me as an adult, but won't hold my breath.

@Tom-It's been years since I've seen the film and I have no interest in revisiting it.

Fanny Van Berg said...
This comment has been removed by a blog administrator.
11:59 PM