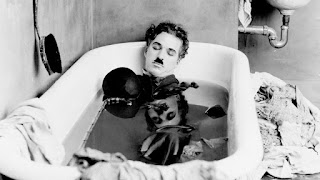 Written, scored, edited, directed, and co-starring Charles Chaplin, Pay Day is the story of a laborer who tries to use his wages to get a drink as he deals with his wife taking some of the wages he makes. The 28-minute silent comedy has Chaplin play the role of the Tramp as he tries to cope with his job and life at home. Also starring Edna Purviance, Mack Swain, Syd Chaplin, and Phyllis Allen. Pay Day is a wondrous and entertaining film from Charles Chaplin.

The film follows the day in the life of a laborer in the Tramp as he is late for work as he does what he can to get his daily wages in the hopes of not having to give any to his cruel wife (Phyllis Allen). It’s a film with a simple premise as the Tramp would do his job while he fawns over the foreman’s daughter (Edna Purviance) who eats lunch with her father Mack Swain). Still, Chaplin does play into the Tramp’s attempt to find some joy in his dreary life as it’s the wages that allows him the chance to be happy for a brief moment despite the fact that his wife would take much of it. Yet, the Tramp would get the chance to drink with his co-workers but would have trouble trying to get home.

Chaplin’s direction not only has him creating some unique gags and compositions that help play into the humor. Much of the compositions are straightforward with a lot of usage of medium shots to get coverage of the location as well as a gag one of which involves an elevator where the Tramp tries to a bit of lunch. Another gag has Chaplin looking over his wages and hiding them unaware that his wife is behind him as it play into the dynamic of his relationship with his wife. Chaplin would get some camera movement for a sequence of the Tramp trying to catch a street car as it showcased some of the obstacles his character would go through. Also serving as editor and music composer, Chaplin keeps the cutting straightforward while the score (that he created in the 1970s) has this playful tone that help add to the humor with its usage of woodwinds and strings. Overall, Chaplin creates an engaging and joyful film about a tramp trying to make an honest day’s work despite the drawbacks in his life.

Cinematographer Roland Totheroh does brilliant work with the film’s black-and-white photography in capturing the richness of the exterior scenes at night as well as in the chase with its usage of available light. Art director Charles D. Hall does excellent work with the look of the construction site as well as the home the Tramp and his wife live in. The film’s marvelous as it feature some notable small roles from Sydney Chaplin in a trio of roles as a mustached workman, a friend of the Tramp, and a lunch cart owner, Henry Bergman as a fat workman, Al Ernest Garcia in a dual role as a tall workman and a police officer, Edna Purviance as the foreman’s daughter whom the Tramp is smitten with, Mack Swain as the pushy foreman, and Phyllis Allen as the Tramp’s cruel wife. Finally, there’s Chaplin in an incredible performance as the Tramp as a laborer trying to make an honest day’s work yet arrives late and often creates chaos without meaning to as he also wants to find some joy endures trouble in his journey to return home.

Pay Day is a remarkable film from Charles Chaplin. Featuring some great visual gags, funny performances from its cast, and a simple yet effective story about the day in the life of a laborer. It’s a film that has Chaplin play into his approach to physical humor and gags while showcasing the struggles of a laborer through his famed Tramp character. In the end, Pay Day is an incredible film from Charles Chaplin.

One of these days I need to watch all of his shorts. I feel so familiar with his work just based on his pop culture status, yet I've barely seen any of it.

There's still a lot of shorts that I need to watch that he did but thankfully, some of them are available on YouTube while remastered ones are likely seen on Criterion as extras for some of Chaplin's feature films. I've done nearly all of the feature-film stuff that he did later in his career, now I just got to do these early shorts.