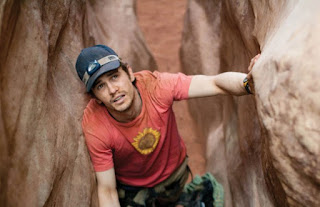 2008 was a huge year for British director Danny Boyle as his film Slumdog Millionaire became the surprise hit of the year. Winning several Oscars including Best Picture and Best Director for Boyle, it was a big surprise considering that Boyle has made a series of strange films about Scottish heroin addicts and zombies running amok in the U.K. prior to Slumdog Millionaire. With Boyle still riding high from that film’s success, the British director decided to take on a much more intimate yet grander project about the impossible. Based on Aron Ralston’s real-life experience in which he was stuck inside a canyon by a boulder. Boyle takes Ralston’s experience into a film that is unlike anything in mainstream cinema (with the exception of a recent film called Buried) entitled 127 Hours.

Based on Aron Ralston’s autobiography Between a Rock and a Hard Place, 127 Hours examines Ralston’s experience in being trapped inside a canyon and how he survived. Directed by Danny Boyle with an adapted script written by Boyle and his Slumdog Millionaire screenwriter Simon Beaufoy. The film reveals Ralston examining his life while figuring out how to get out of his predicament. With James Franco playing the role of Ralston, the film also stars Kate Mara, Amber Tamblyn, Clemence Poesy, Lizzy Caplan, and Treat Williams. 127 Hours is a powerful and intense film from Danny Boyle.

It’s April 2003 as Aron Ralston leaves early in the morning to go hiking and mountain climbing at Robbers Roost, Utah. Upon his arrival, he goes bike riding and then hiking where he encounters two young ladies named Megan (Amber Tamblyn) and Kristi (Kate Mara). He takes them to some special sights where the three have fun. After going their separate ways where the ladies invite Aron to a party later on, Aron continues hiking where he sees goes inside a cave through an opening between canyons. All of a sudden, a boulder falls on Aron trapping his right arm where the boulder wouldn’t move. Stuck and unable to get out, Aron tries to figure out how to get out his situation.

With a mountain knife, a video camera, and a water bottle with very little water. Aron deals with his situation as he tries all sorts of things with own mountain climbing experiences. For the next five days, Aron ponders his own life including his relationship with his parents (Kate Burton and Treat Williams), his sister (Lizzy Caplan), and his ex-girlfriend (Clemence Poesy). Even as he tries to entertain himself and see his surroundings where he makes a fateful decision to get out.

While the idea about a guy being stuck inside a canyon by a boulder for five days doesn’t seem like an exciting idea on film. The story itself is truly compelling about Ralston’s own survival and how he got through it. Screenwriters Danny Boyle and Simon Beaufoy however, was able to make it into an engrossing yet mesmerizing film for 95 minutes. Yet, the first 10-15 minutes were devoted to Ralston going to the Utah canyons and his meeting with two young ladies. Then when Ralston is trapped by the boulder, the story becomes intimate while having flashbacks about Ralston’s own life for the entirety of the film. The screenplay becomes a character study of sorts except having Ralston study himself. Even as the dialogue feels improvised and realistic to Ralston’s own predicament.

Boyle’s direction is truly hypnotic in its presentation as he shoots on location at Robbers Roost, Utah where he often shoots multiple angles and shots of the canyons Ralston is exploring. While some of the canyon scenes were re-created for the film, notably the scenes where Ralston is trapped. Boyle goes a somewhat, cinema verite style by shooting the film from not just the perspective of the audience but also having Ralston himself point the camera at himself. There, he can entertain himself while also being able to face up to his own sins. Even as the camera takes a shot from the perspective at his own water bottle to see how much water he has left.

Fantasy sequences are also unveiled throughout the second act of the film whether it’s a good thing or something that would be horrific. Boyle even has shots where he uses the same images for repetition so Ralston can know what time of day is happening like the brief moment of sunlight passing by or a raven flying above him. These images plus other objects would become symbolic to Ralston’s own troubles. Even as it goes into the third act where he would free himself on the fifth day. There, what Ralston would do would become one of the most graphic but also intense scenes captured on film. Even in the aftermath where he would be free but still trying to survive. The end result isn’t just a film that just goes for the drama of being trapped but also what one has to do to survive. For Danny Boyle, he creates what is probably his most hypnotic and exciting film since 1996’s Trainspotting.

Boyle’s longtime cinematographer Anthony Dod Mantle, along with Enrique Chediak, brings a colorful yet stylish cinematography. While some of the photography style is similar to Mantle‘s work in Slumdog Millionaire. With Chediak, Mantle goes for a realistic look while adding some light for some of the scenes in the cave while also using grainy digital video camera for Ralston’s own perspective shots. The work that Mantle and Chediak do is truly superb as it definitely tops everything Mantle did in his previous collaboration with Boyle. Editor Jon Harris does fantastic work with the film’s stylish, rhythmic editing. Even with the use of multiple split screens to emphasize the numerous perspective shots of what Ralston is doing from his point of view and the camera’s view. Harris’ fluid editing with an array of different pacing speeds for the film’s intensity is truly spectacular.

Production/costume designer Suttirat Anne Larlab, along with set decorator Les Boothe and art director Christopher R. DeMuri, does an amazing job with the recreation of the cove and canyons that Ralston is in along with the boulder. Even for other scenes like the homes that Ralston lived while the costumes are mostly casual. Boyle’s longtime sound designer Glenn Freemantle does a phenomenal job with the film’s sound design in creating the atmosphere that Ralston has surrounded himself with. Even the realism for one of the film’s most intense scenes in the third act. Freemantle’s work is definitely a highlight of the film’s technical field.

Music composer A.R. Rahman brings a vibrant, exciting score that is filled with hypnotic dance-inspired tracks along with slower tracks to emphasize Ralston’s emotions. The soundtrack features an array of tracks including a collaboration between Rahman and Dido plus Sigur Ros, Bill Withers, Plastic Betrand, Esther Phillips, and Frederic Chopin. Many of which are used to either play up some of the humor or the heightened emotions of Ralston. The score and soundtrack is another of the film’s highlights as Rahman makes a triumph follow-up for his work on Slumdog Millionaire.

The casting is definitely inspired with appearances from Koleman Stinger and Parker Hadley as younger versions of Aron and Bailee Michelle Johnson as a younger version of Aron’s sister Sonja while Lizzy Caplan makes a small appearance as Sonja in the film. Other notable but small appearances include Treat Williams and Kate Burton as Aron’s parents, Sean Bott as a friend of Aron, and Clemence Poesy as Aron’s ex-girfriend Rana. Kate Mara and Amber Tamblyn are great in their small but very memorable roles as young female hikers who join Aron early in the film exploring the cave as they later invite him to a party. Mara and Tamblyn really bring a dose of early joy to the film that is needed for something that is more in-your-face.

Finally, there’s James Franco in what is definitely his performance to date as Aron Ralston. Franco definitely brings a lively yet captivating performance where he starts off as this cocky adventurer who likes to have fun and do things. Then when he becomes trapped, Franco goes for the realism in the situation he’s facing while providing a sense of regret and angst to the role. While he’s nearly in every frame of the film, Franco really gives a towering performance that really serves as a true break-out following such memorable turns from the David Gordon Green-Judd Apatow stoner action film Pineapple Express and Gus Van Sant’s Harvey Milk-bio pic Milk. This is the film that will show that Franco is definitely one of the best actors working right now.

127 Hours is a spectacular yet chilling film from Danny Boyle that features a marvelous performance from James Franco. Fans of Boyle’s work will no doubt enjoy this though there’s some moments in the film that isn’t for everyone. Notably the third act yet it is a courageous film that people will see. Even with the recent events about the 33 miners who survived inside an enclosed Chilean cave for 69 days. It’s a film that shows what is great about the human spirit and how someone will do whatever it takes to survive. In the end, 127 Hours is one of the year’s best films as it comes from the dazzling mind of Danny Boyle.

The mesmerizing thing about this movie is how Danny Boyle was able to turn this survival story into a celebration of life. The movie could have been so depressing but it really isn't and that's in great part thanks to Boyle's direction and visual style. Good review Steven!

Thank you Castor. I liked your review as well. A lesser director would go for some grand approach but Boyle kept it simple and to the point. It was the right way to approach the film.

After watching it, I kept thinking about the miners in Chile who are true survivors to endure 69 days of being trapped by a collapsed mine and were able to get out with the help of some great people. That story along with 127 Hours is an indication of what is so amazing about the human spirit.