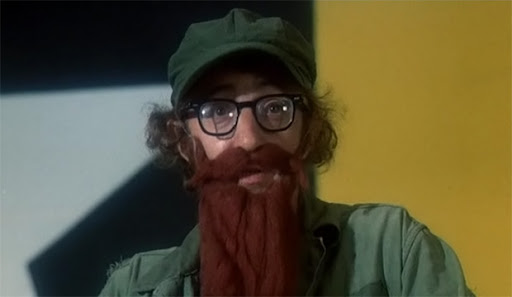 Before Allen went into more somber but humorous films that led to masterpieces like Annie Hall, Manhattan, Hannah & Her Sisters, and Crimes & Misdemeanors, some Allen fans preferred the pre-Annie Hall films Allen did. Mostly because they were filled with his brand of slapstick, neurotic humor that came from his days as a stand-up comic. One of those early films that Woody Allen did as a writer/director/star of his films was a 1971 satire film on dictatorship and American imperialism entitled Bananas.

Written with Mickey Rose, Bananas is a slapstick satire about a products tester who gets involved with a politically-motivated woman only to be dumped because he isn't a leader. In order to win her back, the guy goes to the third-world country of San Marcos which is run by a dictatorship where he stumbles into a rebellious revolutionary group and becomes their unlikely leader. Starring Allen, Louise Lasser, Carlos Montalban, Jacobo Morales, Howard Cossell, Don Dunphy, and in an early film appearance, Sylvester Stallone.

For Fielding Mellish (Woody Allen), his life as a products tester hasn't been an fulfilling one while he has troubles trying to get girls and buy porno magazines. Then one day in his apartment, Fielding invites a political activist named Nancy (Louise Lasser) who asks for him to sign a petition for the U.S. government to stop their relations with the third-world country San Marcos, which is currently run by a dictator named General Emilio M. Vargas (Carlos Montalban). The result for Fielding is that he gains a date and pretends to be very political so he can get a shot at Louise. Unfortunately, his attempt to be very political fails as a planned trip to San Marcos is cancelled when Louise dumps him for not being a real leader. Distraught, Fielding quits his job and angers his surgeon parents (Charlotte Rae & Stanley Ackerman) by going to San Marcos himself.

Upon arriving, Vargas learns that an American has arrived and was hoping to get some political insight from Fielding despite his lack of knowledge. After consulting with his advisors, Vargas decides to have Fielding killed by men pretending to be the revolutionary rebels. Fielding survives only to be captured by the real rebels led by Esposito (Jacobo Morales) who takes Fielding as a prisoner and a soldier. Fielding's attempt to become a real revolutionary is hard and clumsy but immediately gains the respects of the troops while scoring with female revolutionary Yolanda (Natividad Abascal). An attempt to kidnap some ambassadors by Fielding doesn't go well yet his contributions helped overthrow Vargas as Esposito becomes the new president of San Marcos.

Unfortunately, Esposito's new laws become very absurd as he changes the official language to Swedish as fellow revolutionary Luis (Miguel Angel Suarez) decides that Fielding becomes the leader. Through some strange plots, Fielding becomes the new leader of San Marcos where the country is in trouble as their only profitable export is bananas. Luis and Fielding (sporting a fake, Castro-like beard) goes to the U.S. to get aid only to have the truth be revealed on who he is. Everyone from Howard Cosell, Miss America Sharon Craig (Dagne Crane) to J. Edgar Hoover (Dorothi Fox) as a black woman in disguise try to implicate Fielding who tries to ponder the mess he's been in.

Part of Allen's genius for comedy isn't just being the brunt of jokes but his love for slapstick comedy. While the film isn't perfect and isn't meant to be taken seriously, Allen does bring a lot of intelligence to his humor. Especially in his approach to satire about third-world dictatorship where the opening scene in the film is Howard Cossell and Roger Grimsby doing their usual Wide World of Sports commentary on the assassination. The film is also funny on its social commentary and how Allen manages to bring his slapstick humor into the forefront. Some scenes are just priceless when Allen is in training to be a rebel or him trying to get food for his troops. It's proof that Woody is a comedic genius for his natural wit and slapstick humor while he and Mickey Rose writes with such natural delivery in how he wants things to be funny while Allen does some great work in the directing.

Helping Allen on the technical front are cinematographer Andrew M. Costikyan and editors Ron Kalish and Ralph Rosenblum who do great work in their respective fields. The locations for New York City and Puerto Rico as San Marcos are wonderful choices, especially to convey the lunacy of the revolution. The music that Allen has selected from film's score composer Marvin Hamlisch are wonderfully comic from the opening credits through everything that goes out on film.

The casting is even more inspiring with the hilarious cameos from the late Howard Cossell and Don Dunphy to small parts from Dagne Craig, Allen Garfield, Dorothi Fox, Miguel Angel Suarez, Charlotte Rae and Stanley Ackerman as Fielding's parents, and in an early film appearance playing a hood in a hilarious subway scene, Sylvester Stallone. In two hilarious supporting performances both contrasting the ideals of leadership, Carlos Montalban and Jacobo Morales are very funny in their roles, notably Morales as Esposito whose ideas of running his country are very absurd. In playing the female lead, Allen's former wife Louise Lasser does great work in playing Nancy who has all the elements to drive Allen's character into taking action. Lasser does have some funny moments though she is often overlooked in comparison to other Allen muses like Diane Keaton and Mia Farrow to supporting players like Dianne Wiest and Judy Davis.

While some might not get the humor or satire of Bananas, the film is still one of Woody Allen's finer, earlier moments. Though more serious films fans might lean towards films like Annie Hall, Hannah & Her Sisters, and Crimes & Misdemeanors, Bananas, does bring enough laughs to make even to the most serious of film fanatics. Anyone who wants to discover Woody's early work should check this out since all the comedy is all done to entertain and bring some good insight into American imperialism. Overall, Bananas is a true, hilarious gem from the always funny, brilliant Woody Allen.