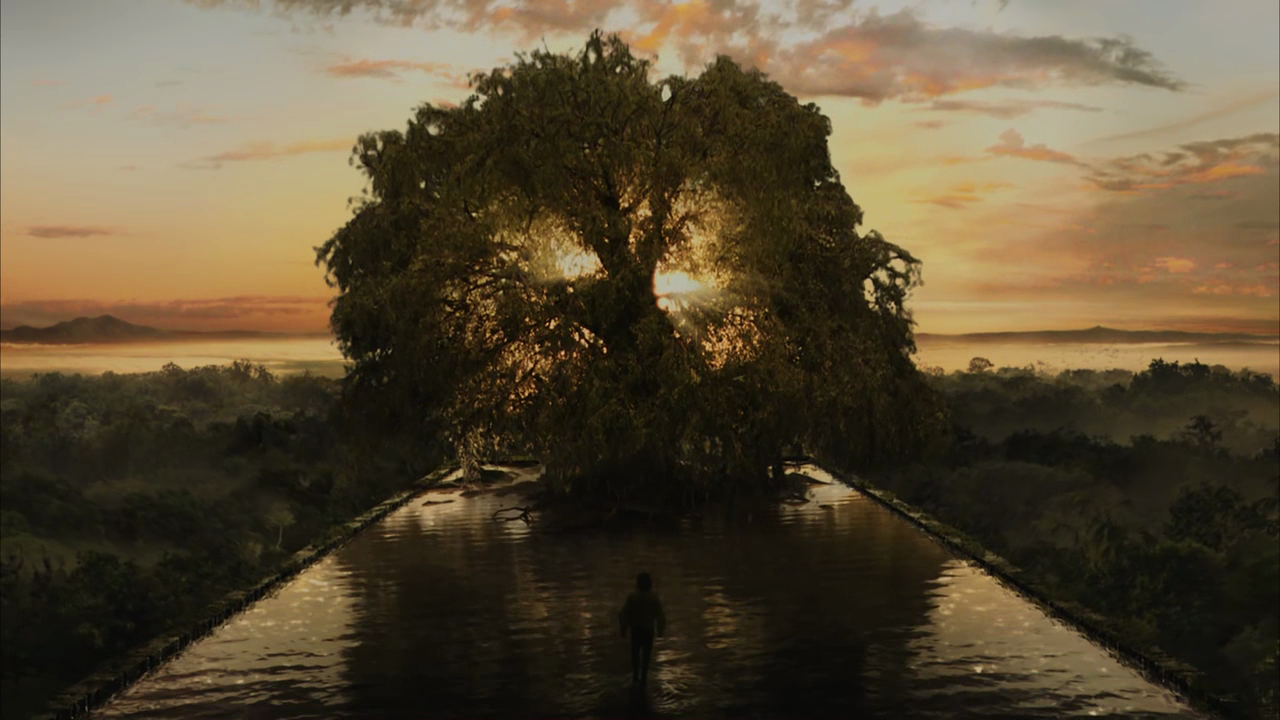 After two back-to-back acclaim hits and a devoted cult following, Darren Aronofsky was becoming the hot director of the moment. Even as his 2000 film Requiem for a Dream became a massive hit, Aronofsky was attached to a number of projects including a chance to revive the Batman franchise. Though Aronofsky was involved as a producer and writer in a project called Below for David Twohy in 2002. He was focused on making an ambitious project called The Fountain that was to star Brad Pitt and Cate Blanchett with Warner Brothers studio backing him. Yet, production issues and cost overruns led to the departures of Pitt and Blanchett. In 2004, the project was revived on a much smaller scale for a $35 million budget with Hugh Jackman taking on the lead role with Aronofsky’s then-girlfriend Rachel Weisz as the female lead.

Directed and scribed by Darren Aronofsky with a story co-written with Ari Handel. The Fountain tells three different stories that all parallel through different time periods. The first tells the story of a conquistador searching for the Tree of Life for his queen while in 2005, a man is trying to find a cure for his wife’s illness. The third storyline revolves around the future as the same man is trying to revive the Tree of Life through outer space. Recalling on Aronofsky’s themes of struggle, ambition, and fear of death. The film is considered to be Aronofsky’s most personal work at the time. Also starring Aronofsky regulars Ellen Burstyn and Mark Margolis plus Cliff Curtis, Stephen McHattie, Donna Murphy, Sean Patrick Thomas, and Ethan Suplee. The Fountain, despite its ambitions, is a film that falls flat on its ideas.

In the 16th Century, an inquisitor named Silecio (Stephen McHattie) is planning a coup against Queen Isabella of Spain (Rachel Weisz) as her captain Tomas (Hugh Jackman) is sent on a mission. Along with Captain Ariel (Cliff Curtis) and a Franciscan priest named Avila (Mark Margolis), they go on a quest to find the Tree of Life in order to stop Silecio. Meanwhile in 2005, a doctor named Tommy (Hugh Jackman) is trying to find a cure to stop a brain tumor that is wife Izzi (Rachel Weisz). With Izzi trying to finish a story, Tommy finds a breakthrough with his associates through an experiment on a chimpanzee. Still, the experiments become controversial as a fellow surgeon in Dr. Lillian Guzetti (Ellen Burstyn) believes Tommy is going too far.

Yet, Izzi’s illness is worsening as Tommy wants to know more about the progress of the experiment. Meanwhile, in the future, a man named Tom (Hugh Jackman) is traveling inside a bubble with the Tree of Life in hopes to revive the Tree to a nebula.

While the film does recall many themes that Aronofsky has explored in the past. It’s the theme of death and how to live with it that is very prominent throughout the film. Even as its key protagonist is desperate to bring life to the ailing woman that he loves. With Aronofsky using the legend of the Tree of Life with relations to the Mayans and Spain’s search for the New World. All of these ideas seem very promising. The problem is that there’s not a lot of weight to the legend of the Tree of Life and some of the ideas end up becoming comical. For a film that is meant to be dramatic with all of these science fiction ideas. It seems like whatever ideas the film had in its earlier incarnation got stripped down to give audiences a story that ends up not saying very much.

Though the love story between Tom and Izzi, in their various incarnations, does drive the motivation of its protagonist. Aronofsky does make the love story compelling but it ends up being bogged down a bit by the typical romantic formula. For the audience, they pretty much know what will happen and what will be the outcome which ends up being very unsatisfying. Notably when part of the film has Tom trying to discover a cure through elements from the Tree of Life. The legend of the Tree of Life is sort of wasted though its climatic ending through the incarnation of Tomas is presented in such a bad way that it ends up being unintentionally funny.

It’s not just Aronofsky’s screenplay that has some issues with what kind of story it wants to tell. His direction, though often engaging and filled with dazzling visuals, is sort of flat in the presentation. Notably for the staging of scenes in some parts of the film. While the camera does move quite seamlessly at times along with moments to just stop and observe the performance. There’s times when the zooms and close-ups become quite repetitive as if he’s trying to make some stylistic choices that don’t work. While he does create some fascinating scenes and visual cues for the film. It’s also an indication of Aronofsky playing it safe for a film that is meant to be high concept only to fall very short.

Cinematographer Matthew Libatique creates a look to the film that is filled with not much light except yellowish hues and candles to encompass a very eerie atmosphere. The problem is that the look ends up being annoying at times where some scenes needed to be brightened where the audience isn’t sure where they’re at. When the white light does come in, the look of the film does improve though its stylization really hurts the film. Editor Jay Rabinowitz does a nice job with the editing though the pacing of the film lags at time while some of the transitions from period to period isn’t as smooth in some parts.

Production designer James Chinlund, along with a team of set decorators and art directors, do an excellent job in creating a regal look for Queen Isabella’s palace along with the hospital and home that Tommy frequents. Even the look of the Tree of Life is extraordinary with help from visual effects producers Keith Cooper and Rob Myers as the look of the outer space sequences are great. Costume designer Renee April does some spectacular work with the dress of Queen Isabella as well as the period costumes for the 16th Century sequence while the costumes for everything else is very good also. Sound designers Stephen Barden, Brian Emrich, and Craig Henighan do a fantastic job in creating layers of sound for each period sequence where the 16th is quiet and unsettling while the future scenes are nearly silent throughout..

Longtime Aronofsky collaborator Clint Mansell creates a score that is definitely one of the film‘s highlights. Performed by the Kronos Quartet and the indie-rock group Mogwai. The score is a mixture of melancholic orchestral pieces to play up to the film’s emotions along with bombastic arrangements for the more intense scenes. While it isn’t up to par with Mansell’s other work for Aronofsky’s films, it is a fantastic score.

The casting by Mary Vernieu is another of the film’s highlights as the film does have some memorable small performances. Among them are Ethan Suplee, Donna Murphy, and Sean Patrick Thomas as fellow surgeons of Tommy who are baffled by his experiments. Stephen McHattie is very good as fearsome inquisitor who is threatening the Queen while Mark Margolis is also good as Father Avila. Cliff Curtis is excellent as Captain Ariel who is convinced that the quest for the Tree of Life is a curse while Ellen Burstyn is superb in a memorable supporting role as Tommy’s lead surgeon who pleads with him to stop with the experiments.

Rachel Weisz is wonderful in her roles as Queen Isabella and Izzi. For Queen Isabella, she displays a regality that is stunning to watch while being mysterious. For Izzi, Weisz displays a bit of humor and innocence while showing great strength in her vulnerability as it’s one of her more underrated performances. Hugh Jackman gives, what is probably his most overlooked performance as Tomas/Tommy/Tom. Jackman’s performance is really the heart and soul of the film as a man hell-bent on a quest to save his beloved while having troubles to really be there for that person. Jackman really shows great dramatic weight to the role despite the lack of weight in the screenplay. It’s still one of his finest performances of his career.

The 2007 Region 1 DVD from Warner Brothers presents the film in both the full-screen format and the 1:85:1 aspect ratio for widescreen. Also in 5.1 Dolby Surround sound for French and English plus English, French, and Spanish subtitles. The special features in the DVD include the theatrical trailer and a one-hour six-part special featurette called Inside The Fountain: Death & Rebirth. The documentary is essentially a making of the film of sorts where Darren Aronofsky and various crew members dwell into the early stages of the film. The original idea was to shoot the film in Australia following a trip to Central America for a look into the ruins. When that early stage into the production fell apart, it took Aronofsky two more years to get it going. The documentary is pretty entertaining in some parts as it includes some funny moments as well as great insight into what the production could’ve been in its first incarnation.

Despite some of its shortcomings in the story and in the direction of Darren Aronofsky. The Fountain is an interesting film with some great visual effects and some great performances of Hugh Jackman and Rachel Weisz. Fans of Aronofsky, no doubt, will be divided about this film as some might think it’s a fantastic meditation on death while others might find it to be overly-pretentious. There’s even room for those in the middle who are unsure about the film. It’s not a failure nor is it a triumph either. In the end, The Fountain is a decent film from Darren Aronofsky that just falls very short on the themes it tried to explore.

Certainly a visually stunning movie as you pointed out, however I felt the movie was needlessly confusing and really quite a jumbled mess which made it hard to comprehend. I know some people regard this film highly but a movie should never be that confusing.

I wasn't confused by it. I was just annoyed by the fact that here is this film about the Tree of Life and is about death. Yet, I knew what was going to happen in the end. It felt way too obvious. I'm not totally mad at Aronofsky. I think he had a lot more to work with. I'm still interested in what he had originally intended with the first version of the film. I don't regard it very highly but I don't dismiss entirely either.

I'm more in the middle when it comes to this film. Thanks for the comments my friend.