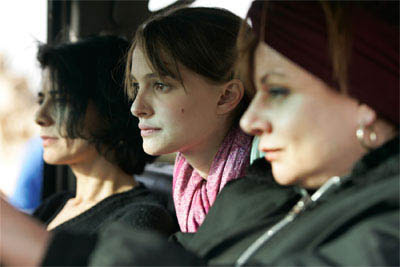 One of Israel’s premier directors, Amos Gitai has garnered lots of attention for his European-approach to telling stories about Israel and its people.  Though his films aren’t always popular in his native homeland, it has garnered lots of international attention.  In 2005, Gitai released a film about a young American woman who joins an Israeli cab driver and a Palestinian woman on a road trip to the Jordan-Iraq-Saudi border.  The film is called Free Zone as it’s directed by Gitai with a script co-written with Marie-Jose Sanselme.  Starring Natalie Portman, Hiam Abbass, Hanna Laslo, Aki Avni, Makram Khoury, and Carmen Maura.  Free Zone is a harrowing yet entrancing road film from Amos Gitai.

After breaking up with her boyfriend Julio (Aki Avni), Rebecca (Natalie Portman) is an Israeli-American who is despondent over the break-up.  Some time earlier, she had met Julio’s mother (Carmen Maura) while it would be the first time she met Hanna (Hanna Laslo).  Hanna is taking over for her husband’s cab service after he got wounded by a Palestinian rocket.  With her husband unable to get some money that was owed to him by a man called the American.  Hanna decides to go on a road trip to the Free Zone area near the borders of Jordan-Iraq-Saudi Arabia.  Rebecca joins Hanna on the trip since she has nothing to do.  They travel through the borders of Jordan up to the Free Zone area for eight hours.

Though they had to deal with border guards and other characters, Hanna makes contact with a woman who knows the American.  After meeting the woman named Laila (Hiam Abbass), it is revealed that the American has disappeared somewhere in an oasis near the Free Zone.  Hanna reveals that she is coming to collect the money as Laila reluctantly takes Hanna and Rebecca to the oasis as the village near the oasis is on fire.  Rebecca meets an old man named Samir (Makram Khoury) as Laila is trying to find something through all of this chaos.  After learning that the son of the American has stolen the money and has gone missing, the three women go to the border to find him.

The film is essentially a road movie about three different women going on a trip to collect some money and settle things.  Yet, it’s not a conventional road film since there isn’t a lot of plot nor the story is very linear.  Still, since this is a film that features a young Israeli-American woman, a forty-year old Israeli who is originated from Germany, and a 40-year old Palestinian.  There is definitely going to be some political conflict of sorts but it’s not watered down nor does it try to come across into some kind of message.  Amos Gitai and his co-writer Marie-Jose Sanselme isn’t interested in the politics but rather be more interested in the characters.

Rebecca is a woman who is not just despondent over a break-up but also confused about her own identity.  Even as she reveals that her dad is Jewish and Israeli but her mother is an American while in Israel, she is said not to be Jewish.  Hanna is the wife of a cab drive who takes over so she can collect money that was owed to her wounded husband.  Hanna is revealed to be a tough-as-nails woman whose family came from Auschwitz during World War II and fled to Israel.  When they meet Laila, Laila is similar to Hanna though carries a sense of melancholia about the long-standing conflict between Israel and Palestine as she reveals to Rebecca that everyone should learn the language of their enemies.  Rebecca suggests that if they do that, maybe there wouldn’t be as much conflict.

Gitai’s direction is truly marvelous as he goes for long takes for many of the film’s sequences.  Though the opening shot of Rebecca crying for six-seven minutes gives the audience an idea of what kind of film they want to see.  There is no real explanation to what Gitai wants to say.  Even as he moves on where he takes the audience on a road trip as if they’re invisible passengers.  Gitai goes for a cinema verite style that is based from his own in documentaries as it’s mostly shot with hand-held cameras and steadicams.

One of the key stylization Gitai uses primarily for the first act are layers of superimposed, dissolved images that are on top of another.  During Hanna and Rebecca’s journey to the Free Zone, there’s another image playing at the same time on top of it which involves Rebecca and Hanna’s first meeting with Rebecca’s boyfriend’s mother.  Another is a flashback of Rebecca’s relationship with her boyfriend.  For Hanna’s own flashback, it’s about what happened to her husband when he gets wounded by a Palestinian rocket.

While some might find these superimposed dissolving images to be pretentious, it is a stylistic choice that works because gives the audience a different idea of how to tell a story while moving it forward.  With the film moving on, it does lead to a climatic third act where some questions are revealed but then comes this strange, abrupt ending.  The ending will be very confusing to some viewers as it comes across as very off-putting at first.  Yet, it’s one that leaves lots of interpretation whether its political or personal.  It’s a strange way to end the film.  Despite some of the flaws in stylization and a few pacing issues for a film with little-to-no plot, it is a very compelling film from Amos Gitai.

Cinematographer Laurent Brunet does some excellent work with the film‘s grainy yet verite look of the film.  Even as it‘s shot with very little lighting styles for many of the film‘s nighttime scenes including the famous oasis fire scene.  Editors Yann Dedet and Isabelle Ingold do a superb job with the film’s editing, notably with the superimposed dissolves to create a stylized approach to telling two plotlines into one without split-screens.  Art director/costume designer Miguel Markin, along with costume designer Aline Stern, does a very good job with the look of the SUV that Hanna drives while the costumes are mostly casual clothing that the women wear.

Sound designers Alex Claude and Michel Kharat do some nice work with the on-location sound including the layers of sound for the film’s superimposed layered images scenes.  The music opens and ends with a traditional track while another song is played during late in the third act as the traditional piece is meant to convey ideas of what the film is sort of about.

The cast is great as it features some small yet memorable appearances from Uri Klauzner as Hanna’s husband, Aki Avni as Rebecca’s former boyfriend, Adnan Tarabshi as gas station owner, and in a cameo role as Rebecca’s boyfriend’s mother, Spanish film legend Carmen Maura who brings a light, comical performance.  Makram Khoury is very good as Samir, a man who runs a Palestinian oasis camp who befriends Rebecca as he reveals the history of the location along with a big secret.  Hiam Abbass is excellent as Laila, a Palestinian black market operator who is trying to help Hanna get her money while dealing with her own issues as well as her own feelings as a Palestinian towards the Israeli Hanna.

Hanna Laslo is superb as Hanna, a cab driver who is hell-bent on getting some money that was owed to her husband.  Though she’s known largely as a comedy actress in Israel, it’s a remarkable yet low-key performance as Laslo is able to play it straight while adding bits of humor to her role as someone who is truly tough-as-nails.  Even as it’s a performance that reveals why she won the Best Actress prize at the 2005 Cannes Film Festival.  Finally, there’s Natalie Portman in what is a very low-key yet surprising performance as Rebecca.  Though it’s not up to par with some of her great performances in other films before and since, it’s Portman at her finest where she maintains an observant approach as an outsider while showing that she can speak perfect Hebrew (since she really is an Israeli-American).  Even as she got to show a natural grace that most young actresses don’t possess for a project as unconventional as a film like this.

Free Zone is a provocative yet haunting road film from Amos Gitai.  Featuring phenomenal performances from Natalie Portman, Hanna Laslo, and Hiam Abbass, it’s a road film that plays to non-conventions while sort of acting as a feminist film of sorts.  Though not everyone will enjoy the unconventional approach of the film as well as some of the idea over the Israeli-Palestinian conflict along with an abstract ending.  It’s a film that gives viewers a chance to see the Middle East as if they’re on a road trip for anyone who hasn’t visited that world.  In the end, despite its flaws, Free Zone is a remarkable yet evocative film from Amos Gitai.

So glad someone did the review for Free Zone, which isn't really liked by most Portman fans xD

I've only watched it once when it came out on DVD, but I remember I thought it was a fine film. Kind of forgettable because nothing really happened, but it's not as crappy as people on IMDb boards claim xD

I was fortunate to find it in my local library (the last place I would think would have that film).

I'm not familiar with Amos Gitai's films but I'm sure he's made better. This was a decent introduction though I'm sure something else is better.

As for the film, I was surprised by it because it's not a very conventional film. I tend to like films where not much happens and there's not much plot as it's all relied on visuals. The ending still confuses me a bit but I still enjoyed it.

After all, since I knew there was going to be a LAMB project on Natalie, I figured I bring in a few obscure stuff rather than something predictable that everyone has seen.