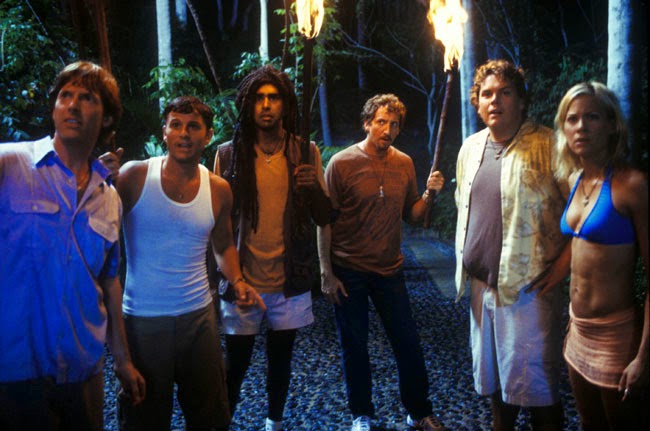 Written by and starring the Broken Lizard troupe, that consists of Jay Chandrasekhar, Kevin Heffernan, Steve Lemme, Paul Soter, and Erik Stolhanske, and directed by Chandrasekhar, Club Dread is a slasher comedy set in a tropical island where a mysterious killer is killing guests and staff members prompting its owner and surviving staff members to find out who the killer is. The film is a spoof of sorts on the slasher films as well as comedies based on paradise retreats. Also starring Brittany Daniel, M.C. Gainey, Jordan Ladd, Lindsay Price, and Bill Paxton as Coconut Pete. Club Dread is an enjoyable yet flawed film from the Broken Lizard troupe.

Set in an island near Costa Rica, the film explores about a series of mysterious deaths that occur in an island owned by the famous musician Coconut Pete as several staff members try to find out who the killer is. Along the way, a fan/masseuse named Lars (Kevin Heffernan) takes part in the investigation as he becomes one of several suspects where a lot of trust issues occur. Even as the number of victims begin to pile up as well as motives into why the killer is killing people. While it does play into the formula of various slasher films, the film’s script does manage to create ideas where it sort of makes fun of the formulas as well as an array of characters who could be the killer as they all have some kind of motive. Though the story does try to balance a lot of comedy where it plays into a sense of distrust as well as staff members trying to entertain the staff. Some of the aspects of the script in being a horror-comedy ends up making it uneven.

Jay Chandrasekhar’s direction does play into many of the tropes that are typical of slasher films but also infuses it with a lot of humor. Notably where there’s some scenes where a character tries to flee from the killer but ends up being a victim in the most comical way. Shot on location in Mexico, Chandrasekhar does take advantage of the location’s beautiful location with its use of wide shots plus some medium shots and close-ups to play into the humor and terror. While some of the funny moments are inspired as well as its approach to the slasher genre. Chandrasekhar isn’t able to find a balance between the two as it reaches its third act where it does begin to suffer in its pacing as characters get killed off until the reveal starts to emerge which is sort of a let down. Overall, Chandrasekhar creates a very entertaining but messy film about a series of murders on a tropical island.

Cinematographer Lawrence Sher does excellent work with the film‘s colorful cinematography with its highlights being the scenes at night with its approach to lighting as it would set the mood of terror in the film. Editor Ryan Folsey does nice work in the editing by creating some offbeat rhythms as well as stylish cuts to play into its suspense and humor. Production designer Ben Conable, with set decorator Melo Hinojosa and art director Theresa Wachter, does fantastic work with the look of the paradise retreat which is a mix of island architecture with modern aesthetics. Costume designer Melissa Bruning does terrific work with the costumes as it‘s mostly casual with some Hawaiian shirts as well as the look of the Coconut Pete character. Sound designer Stephen P. Robinson, with sound editors Andrew DeCristofaro and Kim Secrist, does superb work with the sound to create some sound effects as well as capture the atmosphere of the parties. The film’s music by Nathan Barr is wonderful as it plays this unique mix of orchestral music for its suspense and some island music plus some original material for Coconut Pete while music supervisors Barry Cole and Christopher Covert bring in a soundtrack of electronic music, reggae, and dance music.

The casting by John Papsidera is amazing as it features some notable small roles from Nat Faxon, Dan Montgomery Jr., Julio Bekhor, Elena Lyons, and Tanja Reichart as some unfortunate staff members, Samm Levine as a tourist who likes to mock the tennis instructor Putman, Lindsay Price as a worried staff member in Yu, and M.C. Gainey as a former FBI agent named Hank who tries to find the killer. Jordan Ladd is wonderful as a young tourist named Penelope in whom Juan has a thing for while Brittany Daniel is terrific as the fitness instructor Jenny who is often the smartest person of the pack as she tries to deal with the chaos of the murders. Bill Paxton is great in a hilarious role as Coconut Pete as this musician inspired by Jimmy Buffett who often gets stoned as he tries to deal with the chaos of the murders as he starts to lose his mind.

Finally there’s the Broken Lizard troupe as Erik Stolhanske is excellent as the Fun Police Sam who takes an immediate dislike towards Lars whom he suspects. Paul Soter is fantastic as the DJ/party host Dave who always does drugs and try to run things. Steve Lemme is superb as Juan as he sports a very bad Latin accent as he likes to get laid and do all sorts of things while having a thing for Penelope. Jay Chandrasekhar is hilarious as the British tennis instructor Putnam who doesn’t like Lars very much as he sports some bad dreadlocks while having a thing for Jenny. Finally, there’s Kevin Heffernan in a brilliant performance as Lars as this hardcore fan of Coconut Pete who becomes the retreat’s masseuse as he is also a skilled ninja as he tries to find out who the killer is while knowing he is a suspect.

Oh man, I completely forgot about this film. I remember it being decent. Definitely not as funny as Super Troopers, but decent. Great review!

I agree, a fun but ultimately underwhelming film. Paxton really hams it up, but it's not nearly as accomplished as Super Troopers.

@Brittani Burnham-It has its moments but it was a let-down and subsequent viewings showcase more of its flaws.

@Alex Withrow-Paxton is great in this film. I think it was just the guys trying to do everything but it ends up being a mess.