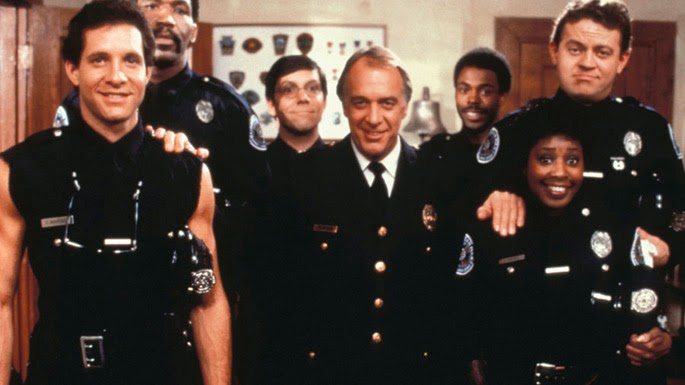 Directed by Jerry Paris and screenplay by Barry W. Blaustein and David Sheffield, Police Academy 2: Their First Assignment is the sequel to the 1984 film where it revolves on six of its graduates who are assigned to help a police precinct captain to battle a local gang. The film plays into the world of gang culture as six young cops do whatever they can to battle this gang as Steve Guttenberg, Bubba Smith, David Graf, Marion Ramsey, Michael Winslow, Bruce Mahler, and George R. Robertson, and George Gaynes all reprise their roles from the first film. Also starring Bobcat Goldthwait, Tim Kazurinsky, Lance Kinsey, Art Metrano, Colleen Camp, Peter Van Norden, and Howard Hesseman as Captain Pete Lassard. Police Academy 2: Their First Assignment is a fun and wild film from Jerry Paris.

When a local gang runs amok on a city as a police precinct captain has 30 days to deal with the situation, he is given six new recruits who had just graduated from the police academy as they deal with this wild gang. It’s a film that sort of picks up where the previous film left off as Mahoney (Steve Guttenberg), Jones (Michael Winslow), Hightower (Bubba Smith, Tackleberry (David Graf), Hooks (Marion Ramsey), and Fackler (Bruce Mahler) are chosen to aid Captain Pete Lassard in shaping up his precinct which is filled with aging cops who are too overwhelmed to handle the situation. Yet, the local gang run by Zed McGlunk (Bobcat Goldthwait) are an unconventional gang who do what they want as the other problem Mahoney and his fellow graduates have is Lt. Mauser (Art Metrano) who also works at the precinct as he is trying to make sure they screw up so he can become the new captain of the precinct.

The film’s screenplay not only play to the struggle the rookies have to face in their very first assignment but also into the world of inter-police politics as Lt. Mauser is eager to make Cpt. Lassard look bad as Mahoney and some of the officers know exactly what Mauser is up to as they would pull a few pranks on him. There’s also some subplots as it relates to the rookies in their first assignment as some of them are paired with more experienced officers as Mahoney teams with a slob named Vinnie Schtulman (Peter Van Norden) and Tackleberry with Sgt. Kathleen Kirkland (Colleen Camp) whom he falls for as they both share a love of guns and firepower. The rookies’ encounter with Zed’s gang also has them meeting up with a frequent victim of the gang in Carl Sweetchuck (Tim Kazurinsky) who is put into some darkly-comical situations. The script succeeds in not just developing the rookies trying to get the job done but also take some major risks in putting Zed and his gang down for good while saving Captain Lassard’s job.

Jerry Paris’ direction is very lively as it is shot on location in Toronto and nearby locations in Ontario as he manages to keep things straightforward in the compositions. Notably as the streets in Toronto are given a very grimy look to play into a city coming undone by a gang as they wreak havoc on the street at it includes a scene walking into a supermarket and causing trouble with some funny moments. Paris’ usage of close-ups and medium shot do play into the action as well as some of the film’s comical moments that includes Jones using his martial arts skill to pretend he’s Bruce Lee or Hightower throwing a football to a street punk. The gags manage to keep things lively as it includes a scene at the Blue Oyster Bar where Zed’s gang definitely cross path with a bunch of men that shouldn’t be messed with. Paris also brings in bits of crass humor that is quite playful as it plays a moment in time where it was OK to be politically incorrect as well as elements that are quite silly but it’s not afraid to be silly or crass. Overall, Paris creates a very funny and engaging film about six rookies going all out against a street gang.

Cinematographer James Crabe does excellent work with the film‘s cinematography to play into the grimy look of the streets for some of the daytime exteriors as well as some unique lighting for its nighttime interior/exterior scenes. Editor Bob Wyman does terrific work with the editing as it‘s very straightforward to play into some of the film‘s humor and action sequences. Production designer Trevor Williams, with set decorators Robert C. Furginson and Dennis W. Peebles, does brilliant work with the look of the city streets to play into its sense of decay as it‘s being ruined by Zed‘s gang as well as the look of Zed‘s secret hideout.

Costume designer Bernie Pollack does nice work with the costumes as it mostly involve the uniforms and the grimy clothes of the gang. Sound editor Dale Johnston does superb work with the sound as it plays into the sound of gunfire and some of the sound effects that Jones make. The film’s music by Robert Folk is brilliant as it features the franchise’s theme as well as thrilling pieces involving the saxophone for its action as well as some of the romantic moments while the soundtrack includes some rock and pop music.

The casting by Pamela Basker and Fern Champion is great as it features some notable small roles from Julie Brown as a seamstress, Jason Hervey as a brat kid who refuses to go to school, Julie Paris as a check-out girl, Andrew Paris as Kirkland’s brother, Arthur Batanides and Jackie Joseph as Kirkland’s parents, Jennifer Darling as the city mayor, Kenji Shintani as a sushi chef, Ed Herlihy as Fackler’s veteran partner Dooley, Rich Hall as blond street punk, and George R. Robertson as Chief Hurst who demands Captain Lassard to turn things around. Other notable small roles include George Gaynes as the academy’s supervisor Commandant Lassard who would give his younger brother Pete the six rookies he needs, Tim Kazurinsky as a wimpy merchant named Sweetchuck who is a frequent victim of Zed and his gang, and Lance Kinsey in a funny performance as Mauser’s assistant Sgt. Proctor.

Peter Van Norden is terrific as the snobbish Schtulman who eats dirty food and always has his big dog Lou around him while Colleen Camp is wonderful as Kirkland who shares Tackleberry’s love of firearms and violence. Art Metrano is excellent as Lieutenant Mauser as a scheming officer who wants to oust Captain Lassard so he can run the precinct and be in total power as his funny moments involve him being the victim of the pranks. Bruce Mahler is very good as Fackler as the accident-prone officer who manages to use that flaw to his unknowing advantage while Marion Ramsey is superb as Hooks as she is forced to sit behind a desk and give out codes until she does what is right in the film’s climax. David Graf is brilliant as Tackleberry who not only copes with having the perfect woman as his partner but also in the fact that isn’t really experienced with being with women. Bubba Smith is fantastic as Hightower as the giant who not only gets the job done but also prove to be the one person that Zed’s gang is afraid of. Michael Winslow is amazing as Jones as he provides a lot of humor with his sound effects while being a total ass-kicker with his martial arts skills.

Bobcat Goldthwait is hilarious as Zed as a gang leader who likes to cause chaos while having a very sensitive side that makes him a very odd antagonist. Art Metrano is marvelous as Mauser as a lieutenant who wants to get rid of Captain Lassard as he mocks the new rookies as he also has an immediate dislike towards Mahoney as he becomes a victim of Mahoney’s pranks. Howard Hesseman is phenomenal as Captain Pete Lassard, Commandant Lassard’s younger brother, who copes with the on-going gang war as well as knowing that he has little time to shape things up in his precinct. Finally, there’s Steve Guttenberg in a remarkable performance as Mahoney as a rookie cop who deals with his first assignment while finding humor in his many situations while dealing with Mauser as he knows what he is up to.

Police Academy 2: Their First Assignment is an excellent film from Jerry Paris as it’s one of the finest films of the franchise. Most notably for its cast, music soundtrack, and its offbeat humor that manages to keep things being wacky as well as entertaining. In the end, Police Academy 2: Their First Assignment is marvelous film from Jerry Paris.

I remember loving this as a kid, but not so much when I saw it years later. That said, the cast of characters is still somewhat fun, here, led by Guttenberg who had a certain charm to him.

The first 2 films have been on TV lately as it's making me want to revisit the entire franchise.

I enjoyed this one. Especially for Guttenberg who definitely has this sweet charm to some of the crass jokes he makes. Especially the one with the balloon and that little joke he made about Mauser's hairy palms. That guy needs to make a comeback.

It has been years since I saw this. I do remember having fun with it. Unfortunately the later PA flicks get pretty dreadful.

@keith71_98-Yeah, the film from the third to the sixth were a mixed bag but I still enjoyed them. The 7th one though wasn't very good.