Diary of a Pregnant Woman 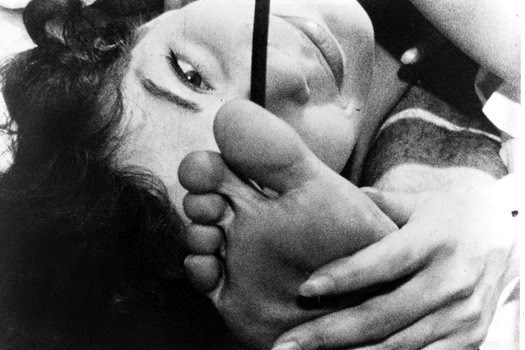 Written, directed, and narrated by Agnes Varda, Diary of a Pregnant Woman is a 17-minute short film set in a busy, working-class street of Paris as it chronicles the life of a pregnant woman. The film is a mixture of documentary and fantasy told in lively fashion by Varda as well as having the narrative sung in an offbeat way. The result is a fascinating short by Agnes Varda.

The film revolves around the life of a pregnant woman as she lives in the Latin Quarter of Paris as she is rarely seen on camera as she observes her surroundings. It’s a film that doesn’t play by any rules as writer/director Agnes Varda goes for something that mixes documentary footage to capture the ideas of what this pregnant woman is seeing as well as some sequences that play into a sense of fantasy as it relates to the woman who is having sex with her lover. Varda’s direction also displays some unique close-ups and images that describes the idea of what a woman is going through in her pregnancy as well as match other images as if they’re abstract in some ways. With the help of cinematographer Sacha Vierney for its black-and-white photography and the stylish editing of Janine Verneau, Varda maintains something that is comical but also compelling as she is also accompanied by the lively music score of Georges Delerue. Overall, Varda creates a very intriguing yet imaginative film about the life of a pregnant woman.

Diary of a Pregnant Woman is a riveting short film from Agnes Varda as it explores what ideas a woman might be thinking of her in pregnancy. It’s also a film that captures something that feels very real in its surroundings as it plays into a part of Paris that wasn’t seen very often in the late 1950s. In the end, Diary of a Pregnant Woman is an exquisitely rich film from Agnes Varda.

Ive heard of Varda's work, but I've yet to see anything from her...this sounds like it would be a great watch, and at only 17 minutes...what's the excuse! I'll have to check this out.

This is only the 2nd film of Varda's that I've seen so far as I've got another short to do as well as a feature. She's someone I want to explore as she is called the Grandmother of the French New Wave.

I've never heard of this, but it does sound very interesting. Thanks for enlightening me.

@Wendell-You're welcome. It's available on YouTube but in its French title though I don't think it'll be too hard to find. I was able to see it on TCM where they did a little thing on Agnes Varda.