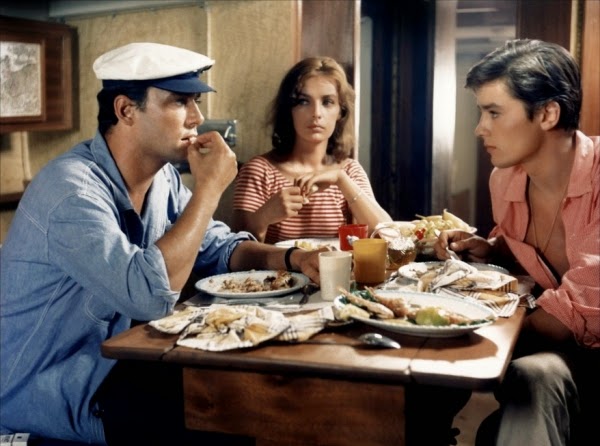 Based on the novel The Talented Mr. Ripley by Patricia Highsmith, Plein Soilel (Purple Noon) is the story of a young man who is trying to get his rich friend back to America only for things to go wrong. Directed by Rene Clement and screenplay by Clement and Paul Gegauff, the film is an exploration into a man trying to be part of a world he has no idea about as things eventually go wrong when he becomes jealous and angry. Starring Alain Delon, Maurice Ronet, and Marie Laforet. Plein Soilel is an intriguing yet exhilarating film from Rene Clement.

The film revolves around a young man who is being paid $5000 to bring his rich friend back to America where the task goes wrong in an act of jealousy. It plays into this young man named Tom Ripley (Alain Delon) who is constantly around the son of a rich man who is supposed to return home and live a life of responsibility. Instead, Philippe Greenleaf (Maurice Ronet) just wants to have fun though he treats his girlfriend Marge (Marie Laforet) quite poorly at times where a boat trip with Ripley becomes disastrous due to Philippe’s selfishness as it would set the stage for everything that Ripley would do. The film’s screenplay has a unique structure where the first half is about Ripley’s friendship with Greenleaf as he is trying to get him home. Yet, things become complicated where the disastrous boat trip has Ripley be pushed into a lifeboat and stranded for some time where he gets sunburned only for Marge to be the one that is really concerned as it’s one of many reasons why she leaves the boat trip.

Marge is an interesting character as she is someone who is repulsed by Greenleaf’s treatment of her as well as sleeping around with other women yet she is in love with him as she would wonder about his whereabouts after the boat trip. The film’s second half plays more into the events after the boat trip where Ripley becomes the story as he would roam around Italy as he would pretend to be Greenleaf. It plays into the world of identity as well as an ambiguity into Ripley’s motivations as he would do things to get ahead in the world but also raise suspicion over his actions.

Rene Clement’s direction is mesmerizing as Clement aims for something that feels intimate but also a richness to play into the beauty of the various locations in Italy. Much of it involves Clement’s approach to medium shots and wide shots as the cities are major characters in the film as well as the Mediterranean Sea as the scenes on the boat feature some unique camera angles and compositions that are rich. Clement’s usage of hand-held cameras are also very evident as it plays into Ripley’s own adventure as the close-ups are also interesting as well as the compositions. It adds to the sense of ambiguity into what Ripley is doing as well as some are playing into his façade or know that he is lying. Even as it plays into the idea of whether he would get away with it right to the end. Overall, Clement creates a very thrilling and very intelligent film about a young man who forges a new identity in the wake of a bad boat trip.

Cinematographer Henri Dacae does incredible work with the film‘s rich and colorful cinematography as it pays great attention to detail into the look of the Mediterranean Sea as well as creating some unique lighting schemes and such for some of the interior settings in the film. Editor Francoise Javet does excellent work with the editing as it has an air of style with its usage of jump-cuts and dissolves to play into Ripley‘s own transformation and encounters with the world of the rich. Production designer Paul Bertrand does amazing work with the look of the apartments and hotel rooms that Ripley would stay in as it plays into his own evolution as a character as well as the boat where things would go from carefree to sinister into what Ripley would do.

Costume designer Bella Clement does brilliant work with costumes from the posh and stylish clothes that Greenleaf wears throughout the film as well as the dresses that Marge would wear as it has this air of style and vibrant colors that are fun to watch. The sound work of Jean-Claude Marchetti is terrific for some of the sparse sound work that goes on in the sea as well as the raucous moments in the Italian cities including Rome. The film’s music by Nino Rota is fantastic for its lush, orchestral-based score along with string-based pieces and accordions that play into the world of Italy as it’s one of Rota’s more overlooked scores.

The film’s phenomenal cast includes some notable small roles from Elvire Popesco as a ballet patron Greenleaf and Ripley socialize with, Nicolas Petrov as the ballet Boris, Frank Latimore as a drunk named O’Brien, Ave Ninchi as a woman Greenleaf flirts with in Rome, Barbel Fanger as Greenleaf’s father who appears late in the film, Erno Crisa as Inspector Riccordi, and Romy Schneider as a companion of one of Greenleaf’s friends in Freddy Miles. Bill Kearns is superb as Greenleaf’s friend Freddy Miles as a man who likes to be a playboy and do things that rich young kids do while he later becomes suspicious about Ripley over Greenleaf’s whereabouts.

Marie Laforet is amazing as Marge as this woman who is torn for her hatred of Greenleaf’s playboy lifestyle as well as being in love with him as she becomes close with Ripley as the two cope with Greenleaf’s disappearance. Maurice Ronet is excellent as Philippe Greenleaf as this young playboy who likes to spend his money while avoid responsibility as he mocks Marge’s work as a writer as he is also quite cruel to Ripley. Finally, there’s Alain Delon in a tremendous performance as Tom Ripley as this young man who is asked to retrieve his friend back to America only for things to go wrong as he starts to forge a new identity as it’s a very charming and exquisite performance from Delon.

I really like this film, but I can't love it because of how hard it veers from Highsmith's original novel...the finale is just too...censored, and I'm really shocked it went that route considering the fact that this is French and it is the 60's and they were kind of balls out most of the time. Still, it's expertly directed/acted and shot, so on it's own it is rather remarkable...but as an adaptation it bothers me.

Alain Delon’s performance as Tom Ripley is very assured, yet also quite cold, so maybe that’s why I prefer Matt Damon in that role.
I prefer the 1999 film for entertainment, yet the 1960 version to me feels closer to real life. Which adaptation do you prefer?

@Fisti-I haven't read the book but then again, I don't think adaptations are meant to be faithful. It was quite daring though I think the ending itself was meant to be shocking but with an air of ambiguity.

@Chris-I haven't seen The Talented Mr. Ripley so I really can't say which one I prefer.