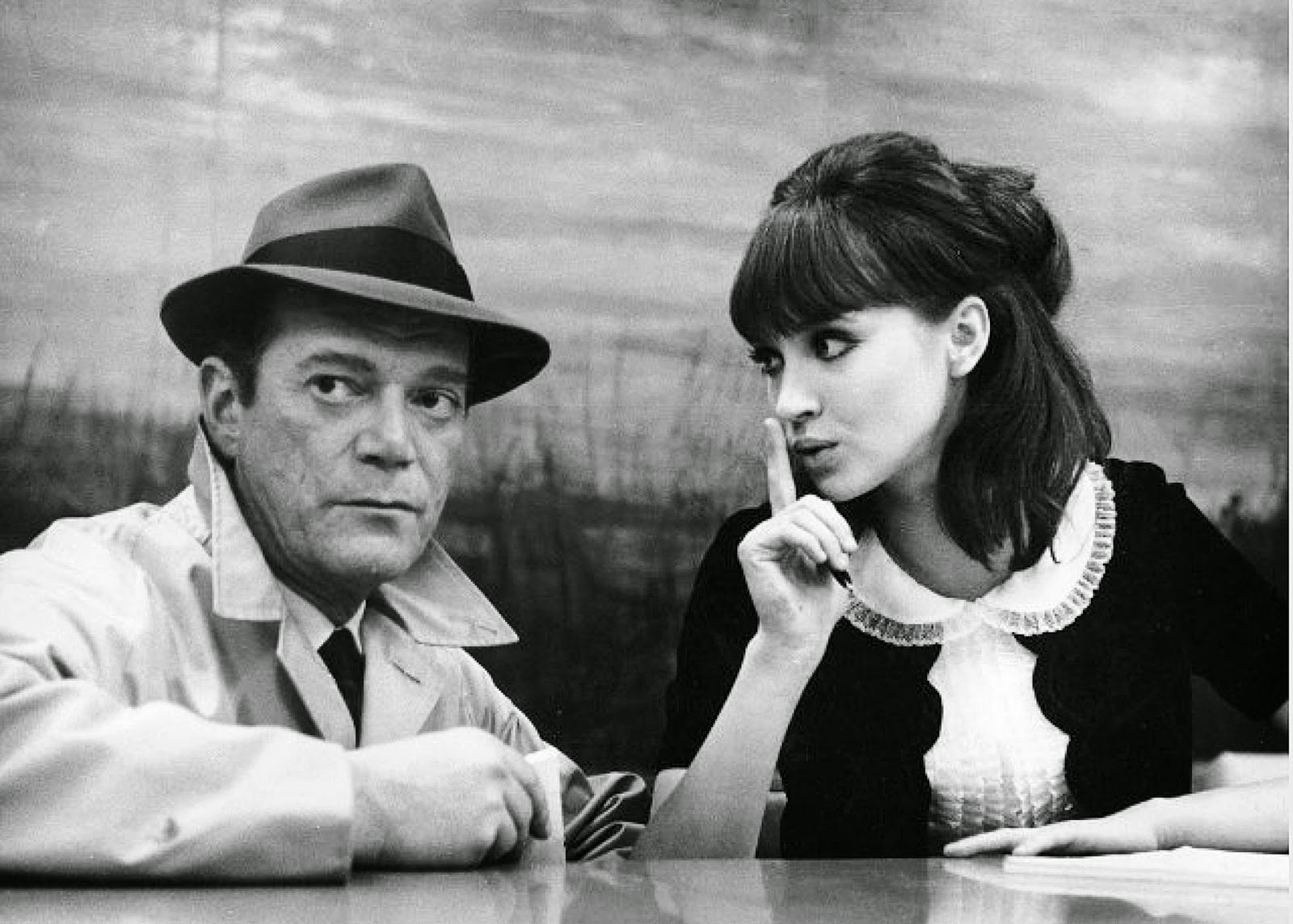 Written and directed by Jean-Luc Godard, Alphaville: une etrange aventure de Lemmy Caution (A Strange Adventure of Lemmy Caution) is the story of a secret agent who is assigned to an inventor of a Fascist computer in a futuristic world. The film is a mixture of science fiction with film noir as it plays into a world that is strange as a man finds himself in a world that mixes elements of the 20th Century with a world that is very foreign to him. Starring Eddie Constantine, Anna Karina, Howard Vernon, and Akim Tamiroff. Alphaville is a strange yet entrancing film from Jean-Luc Godard.

Set in a futuristic world that isn’t too distant from 1960s France, the film revolves around a secret agent who arrives in a dystopian city to kill an inventor who has created a computer that controls its people as ideas of love, art, and free-thinking is banned. While it’s a plot that is very simple, it is a story that is very complex as its auteur Jean-Luc Godard creates something that is very abstract as it relates to ideas of existentialism and what a man is trying to do in this dystopian world. It is largely told from the perspective of its lead character Lemmy Caution (Eddie Constantine) who arrives to the city of Alphaville under an alias as he meets this mysterious woman named Natacha von Braun (Anna Karina) whose father (Howard Vernon) is the inventor of the computer known as Alpha 60.

It’s a script that doesn’t play into any conventions as the computer itself is a character in the story as it acts as this cold antagonist that mocks the ideas of love, individuality, and something as simple as poetry. The script is filled with a lot of ideas to set up this dystopian world as it plays into a future that doesn’t feel too distant yet it plays into a world that is the antithesis of what was happening in the 1960s. Even as cities of other countries are referred to in different languages as New York is said in its Spanish pronunciation while everything outside of Alphaville is referred to as the Outlands. It’s where Caution comes from as he brings books of poetry and a gun as his encounters with Natacha would have him going into a personal mission of his own as she had been in control of Alpha 60 as she has no idea what love is or anything else.

Godard’s direction is definitely stylish as he definitely goes for something that is very off-the-wall as he shoots the film on location in Paris without the need to really do anything different to the locations. It’s shot as if Alphaville is stuck in the 1960s even though it is the future as Godard’s use of wide shots and very offbeat angles help play into this strange world that is the future. The film also features these gazing images that play into the future as the computer Alpha 60 is played an electric fan with a light in the background. There is something that feels absurd about what the future is as objects from the time are present such as a camera that Caution carries which was new at the time of the film’s production. Godard also uses some very intricate compositions such as close-ups and medium shots to help play into the suspense and drama while going for some very engaging camera angles to play into something that feels off and otherworldly. While there is a lot that goes on where it can be hard to follow at times, it does play into Caution’s own adventure to try and stop the ideas of a computer from spreading the rest of the free world. Overall, Godard crafts a very engaging yet off-the-wall film about a man killing a computer inventor in a futuristic world.

Cinematographer Raoul Coutard does amazing work with the film‘s black-and-white photography as he uses some intricate lighting schemes and textures to play into the world that is Alphaville for scenes at night as well as some moods for the daytime scenes. Editor Agnes Guillemot does brilliant work with the editing to create some very disconcerting jump-cuts to play into suspense along with other stylish cuts for its sense of drama and action. Production designer Pierre Guffroy does fantastic work with the design of the hotel rooms that Caution would stay in as well as some of the places he goes into including the secret office of Professor von Braun.

The sound work of Rene Levert does superb work with some of the sound effects as well as the distorted voice of the Alpha 60 computer. The film’s music by Paul Misraki is wonderful for its myriad of orchestral music from suspenseful themes to lush and evocative pieces to play into Caution’s love for Natacha.

The film’s phenomenal cast includes some notable appearances from Jean-Pierre Leaud as a breakfast waiter, Christa Lang and Valerie Boisgel as a couple of seductresses, Jean-Louis Comolli and Jean-Andre Fieschi as a couple of professors respectively named Jeckell and Heckell, and Akim Tamiroff in a terrific performance as a friend of Caution in Henri Dickson who was supposed to do the mission but succumb to the traps of Alpha 60’s ideas. Howard Vernon is excellent as Professor von Braun/Leonard Nosferatu as the inventor of Alpha 60 who tries to remove elements of his own humanity as he offers Caution to join him.

Anna Karina is remarkable as Natacha as a woman who had been in Alphaville for too long as she accompanies Caution to the world as she starts to attain elements of humanity including the idea of love. Finally, there’s Eddie Constantine in an incredible performance as Lenny Caution/Ivan Johnson as a spy posing as a journalist who is assigned to kill an inventor as he copes with the strangeness of his surroundings and the ideas of Alphaville as it is a very chilling yet intoxicating performance from Constantine.

Alphaville is a sensational film from Jean-Luc Godard that features great performances from Eddie Constantine and Anna Karina. While it maybe one of Godard’s more offbeat and inaccessible features during his New Wave period. It is still a fascinating film that plays into the idea of dystopia as if it was set in a modern world where things have unknowingly changed. In the end, Alphaville is a tremendously provocative yet exhilarating film from Jean-Luc Godard.

Oh boy... okay... I'm going to try and be civil with this post but when it comes to Godard that's very hard for me to do. I've already been forced to watch another one of his films (Breathless, which I've also gone on something of a tangent on earlier today: http://hitchcocksworld.blogspot.ca/2015/03/why-breathless-is-most-pointless-crime.html) and I'm not afraid to voice just how much I hate this so-called cinematic genius.

I'm going to have to be honest and say that I completely 100% disagree. Alphaville is the laziest most pathetic piece of science fiction that has ever been conceived by a human being, and I don't know what "imagination" you're talking about because from what I've seen Godard is a man who wouldn't know imagination if it walked up to him and punched him in the face. I mean, imagine if Blade Runner did precisely the same thing. Instead of creating a compelling and interesting vision of future Los Angeles, they plunked Harrison Ford into 1980's Los Angeles and then tried to make it seem futuristic by throwing the word "nebula" into random lines of dialogue, just having people spontaneously saying things like "things are a lot different in this nebula". Seriously, all the mentions of "galaxy" do is show that Godard has no idea what he is talking about (he seriously needs to take an astronomy class and learn just what a galaxy really is) and show that he is desperately trying to cover up the fact that he was too lazy to actually create an interesting interpretation of the future. As a writer myself, I can tell you from experience that is NOT how you write good science fiction.

To be honest, I'm not even sure why Godard even bothered trying to pretend it was the future if he wasn't even going to make an effort to do something interesting. If he was going to go that route it would have probably made a lot more sense just to put the story in 1960's Paris. At least then this supposed stylistic choice would have made slightly more sense.

Okay, that's my extended rant out of the way. I guess it's a well-written post and now you're in a position to comment on it which is good so... yay? Out least this one is done, so it should be interesting to see what film you pick next.

@Fisti-Close enough although I did enjoy it despite the fact that it was way out there.

@John Hitchcock-Well, I think the reason Godard made it the way it was is because maybe he had a small budget and just used whatever was available to him. Plus, maybe he thought the future wouldn't really be any different from the present world. Thank you for commenting.