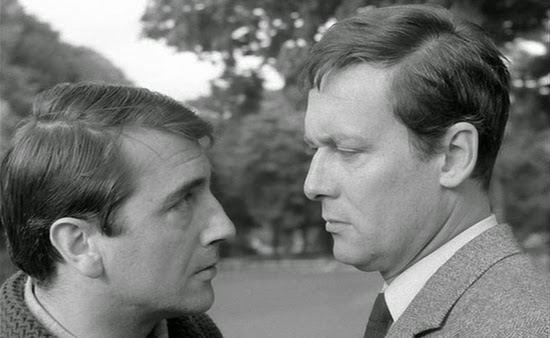 Based on the novel Will O’ the Wisp by Pierre Drieu La Rochelle, Le feu follet (The Fire Within) is the story of a recovering yet depressed alcoholic goes on a final journey to meet friends for the last time as he intends to kill himself. Written for the screen and directed by Louis Malle, the film is an exploration into a man’s final days as he tries to find reasons to live. Starring Maurice Ronet, Jeanne Moreau, and Alexandra Stewart. Le feu follet is a riveting yet haunting film from Louis Malle.

The film revolves on the day of the life of a recovering alcoholic who is about to leave a clinic as he leaves for Paris to see if he can find any reason to live as he is succumbing to depression and a need to kill himself. It’s a film that explores a man trying to find answers as he is wondering if he can return to the real world as he’s been spending months at a clinic in Versailles as his leave from the clinic becomes a test to see if he can return to the real world. What happens is that he not only learns that the lives of some of his friends have changed but some of them has disappeared. Some of his friends have changed their lives for the betters while others haven’t as it plays into this man’s growing sense of despair in the course of an entire day. Louis Malle’s screenplay doesn’t really go for any plot schematics other than explore what Alain Leroy (Maurice Ronet) is going through in the course of the day. Even as it features bits of voiceover narration to play into Alain’s state of mind.

Malle’s direction is very engaging for the way he aims to capture something that does feel real in the course of what might be his last day on Earth. Malle aims for something that is in line with the concept of cinema verite as he does shoot largely in locations in Paris and Versailles as there’s some hand-held cameras that shoot in these locations where there’s a lot of medium shots and close-ups. Most notably in the latter as Malle captures all of the anguish and despair in Leroy’s face as it plays into the sense of unknown but also fear as he is unsure about his place in the world. Even as it becomes more evident a dinner party late in the film where he stands out for the wrong reasons which only has him revealing that even though he is a wreck of a man. At least he’s being honest about it and has nothing else to lose. Overall, Malle creates an evocative yet mesmerizing film about a man going into an existential journey on what might be the last day of his life.

Cinematographer Ghislain Cloquet does brilliant work with the film‘s black-and-white photography from the look of the daytime interior/exterior settings to some very enchanting scenes set at night including the dinner party. Editor Suzanne Baron does excellent work with the editing as it is stylish to play into Leroy‘s troubled state of mind as it features some jump-cuts, dissolves, and fade-outs to play into the journey he would take. Production designer Bernard Evein does nice work with the set pieces from the look of the room that Leroy would stay at the clinic as well as the house party he would attend late in the film. Costume designer Gitt Magrini does terrific work with the costumes from the stylish clothes the women wear to the casual look of the men. The sound work of Guy Villette is superb for the sparse sounds at the party as well as the scenes set in Paris. The film’s music consists of pieces by Erik Satie as it is a crucial element to the film that plays into melancholic state of mind that Leroy would endure.

The film’s amazing cast includes appearances from Jean-Paul Moulinot as Leroy’s doctor, Rene Dupuy as a bartender Leroy knew in his apartment, Lena Skerla as a mistress early in the film named Lydia, Bernard Noel as a friend of Leroy in Dubourg who has become a family man, Ursula Kubler as Dubourg’s wife, Jacques Sereys as a rich friend in Cyrille, Alexandra Stewart as a socialite in Solange, Tony Taffin as a snotty and bigoted rich man in Brancion, and Jeanne Moreau in a wonderful performance as an old flame of Leroy who has become a drug addict. Finally, there’s Maurice Ronet in an incredible performance as Alain Leroy as a man who feels lost in his despair as he is unsure about his place in the world as he tries to figure out if he has anything else to offer as he already lost his wife, his family, and everything else as it’s a very entrancing performance from Ronet.

This is on my Netflix queue, near the top but I keep pushing it down for other things. I'll have to bump this back to the tip top, as it sounds incredible! I didn't know what it was about, but that it was Malle and starred Moreau, and that was enough for me!

It is one of Malle's best films as well as very intriguing study into the world of depression. Jeanne Moreau only appears in the film briefly but she is still great in the film.

I remember the film as bleak and as you said with a tremendous central performance. My favorite scene is when he goes to see his married friend, the conversations between the two old pals I found meaningful. This particular scene is also recreated in Oslo August 31st (2011), a Norwegian film that is a modern retelling of the story.

@Chris-That is a great scene. A very sobering one as it plays into Ronet's sense of uncertainty he wonders if he can handle the responsibility of having a family.

Been wanting to get into Louis Malle's films, this one sounds like a good one to start with.

@ruth-I would start with Elevator to the Gallows which I think is a better introduction yet this wouldn't be a bad one to start with. Even as it explores the world of depression.

Definitely a sensational film. Maurice Ronet gives one of my all time favorite performances in this movie. Great review.

@Alex Withrow-Merci. It was better than I thought it would be and certainly a template for these kind of performances.