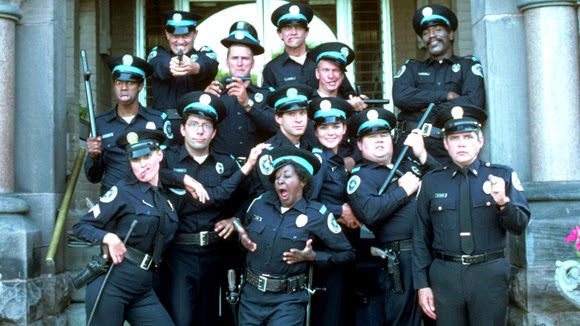 Directed by Hugh Wilson and screenplay by Neal Israel, Pat Proft, and Hugh Wilson from a story by Israel and Proft, Police Academy is the story revolving around a group of misfits who attend the police academy to become police officers after a new policy by the city’s mayor has been created. The film is a comedy that revolves a group of oddball characters who are eager to become police officers despite their lack of physical, educational, and mental requirements to be part of the police force. Starring Steve Guttenberg, Kim Cattrall, Michael Winslow, David Graf, Bubba Smith, Bruce Maher, Marion Ramsey, Donovan Scott, Leslie Easterbrook, G.W. Bailey, and George Gaynes as Commandant Eric Lassard. Police Academy is a silly yet absolutely enjoyable film from Hugh Wilson.

When a shortage of police officers in an unnamed American city gets the attention of its newly-elected mayor, a new policy emerges that would allow ordinary people to attend the city’s police academy as the film revolves this group of oddball misfits who would join the academy. Among them is the gun-obsessed Eugene Tackleberry (David Graf), a human beatbox/noise-maker in Larvell Jones (Michael Winslow), a gigantic man of strength in Moses Hightower (Bubba Smith), an overweight coward in Leslie Barbara (Donovan Scott), a soft-spoken and timid Laverne Hooks (Marion Ramsey), the accident-prone Douglas Fackler (Bruce Mahler), a bored socialite in Karen Thompson (Kim Cattrall), a ladies man in George Martin (Andrew Rubin), and an easy-going trouble-maker in Carey Mahoney (Steve Guttenberg). All of which enter the academy as they all face challenges while Mahoney is forced to attend the academy by an old friend of his father so he can avoid jail time for his many antics.

The film’s screenplay plays into the challenges these characters have to face at the academy as not everyone is happy about the mayor’s new policy such as Chief Hurst (George R. Robertson) and Lieutenant Thaddeus Harris (G.W. Bailey) who would train the cadets in the worst way to get them to quit. The academy’s superior Commandant Eric Lassard however, wants to give the new recruits a chance as he is open to the new changes despite Lt. Harris’ attempts to push them as he seeks the help of a couple of recruits in Blankes (Scott Thomson) and Copeland (Brant Von Hoffman) whom he feels have what it takes to actually be police officers. The film features a lot of subplots as it relates to the training period as Mahoney gets the worst of it as he is being pushed to quit where he goes from being this trouble-maker to actually wanting to become a cop like his father did many years ago. He also helps out his fellow cadets like Hightower who has all of strength and power to be a cop but hasn’t driven a car since he was twelve.

The script’s strength also involves the fact that it doesn’t take itself so seriously as it manages to play into many antics in which the main antagonist in Harris would often be the brunt of these antics while Blankes and Copeland would be victims of some of the pranks Mahoney would create. Among them is where the two were given to the wrong directions of a party the cadets were having as they end up walking into a gay bar known as the Blue Oyster Bar filled with men in leather and biker gear who seem to love tango music. There’s also antics in which the George Martin character disguises himself as a woman to sleep with female cadets as he gets the attention of one of the academy’s trainees in Sgt. Debbie Callahan (Leslie Easterbrook). It all plays into the development of the cadets as they would gain the respect of Sgt. Callahan and Commandant Lassard but also some self-respect as it would drive Mahoney to find meaning in his own life.

Hugh Wilson’s direction is very simple in terms of the compositions he creates while manages to display some very funny gags that are prevalent through the film. Shot on various locations in Toronto as well as Hamilton, Ontario in Canada, the film does feel like it could be shot in America as it plays into a world where things aren’t going as great as it creates this motivation to get new recruits. The locations where the academy and its training facilities are lovely to watch while it does add to some of the humor in these moments. Especially in a few sequences such as a training sequence where the cadets had to use a shotgun as it relates to how crazy Tackleberry is when he is given a shotgun.

Wilson’s doesn’t go for anything stylized though there’s a few dolly tracking shots and some unique camera angles as he mostly uses medium shots and close-ups for the film. Even as it plays into the film’s climatic riot that is caused by a simple accident as it has moments of thrills but also some big laughs where Wilson manages to find the right balance for these moments. Overall, Wilson creates a very funny and lively film about a bunch of misfits becoming police officers.

Cinematographer Michael D. Marguiles does excellent work with the cinematography as it‘s quite straightforward with some unique lighting schemes for the interior/exterior scenes set at night. Editors Robert Brown and Zach Staenberg do nice work with the editing as it‘s very straightforward with some stylish rhythmic cuts to play into the film‘s humor. Production designer Trevor Williams, with set decorator Steve Shewchuk and art director Dennis Davenport, does brilliant work with the design of the Police Academy facilities as well as some of the locations in the city such as the climatic riot sequence.

Costume designer Christopher Ryan does terrific work with the costumes from the different array of clothes of the characters prior to joining the academy to the uniforms and sweats they would wear in training. Sound editor Anthony Ippolito does superb work with the sound from the way some of Jones‘ own sound effects are presented to the sounds of gunfire and other things. The film’s music by Robert Folk is amazing for its bombastic theme as well as other score pieces that range from jazz to rock to play into some of the action and humor while the music soundtrack includes pieces of dance music, jazz, pop, and tango music for the scenes at the Blue Oyster Bar.

The casting by Pamela Basker and Fern Champion is incredible as it features some notable small roles from Ted Ross as Captain Reed who knew Mahoney’s father, Debralee Scott as Fackler’s wife in a very funny scene, Doug Lennox as the main bad guy in the riot sequence, Georgina Spelvin as a hooker who is tasked to get Barbara in trouble, and George R. Robertson as the city’s police leader Chief Hurst. Other notable small roles include Leslie Easterbrook as the very tough yet sensuous Sgt. Callahan, Brant Von Hoffman and Scott Thomson in their respective roles as the jerk cadets Blankes and Copeland, Bruce Mahler as the accident-prone Fackler who always unknowingly cause trouble, Andrew Rubin as the suave ladies man George Martin, and Donovan Scott as the cowardly Barbara who would gain some guts in the academy as they all give some funny performances.

Marion Ramsey is terrific as the meek Laverne Hooks who could barely speak loudly as she would later find her own voice and confidence as a cop. Michael Winslow is excellent as Larvell Jones as a man who can sound effects with his own mouth as he would prove to be very useful for the police force. David Graf is fantastic as Eugene Tackleberry as a man who loves guns and to kick ass as he is also this off-the-wall adrenaline junkie. Bubba Smith is superb as Moses Hightower as a gigantic man with great strength who is also quite humble and only uses violence when necessary. Kim Cattrall is wonderful as Karen Thompson as a socialite who joins the academy to broaden her view of the world as she would become Mahoney’s love interest.

G.W. Bailey is brilliant as Lt. Thaddeus Harris who sees the new cadets as dirt bags as he decide to train them till they quit as he finds an opponent in Mahoney. George Gaynes is amazing as Commandant Eric Lassard as the police academy’s leader who is an eccentric individual that wants to give the cadets a chance while spending a lot of time with his goldfish. Finally, there’s Steve Guttenberg in a remarkable performance as Carey Mahoney as a troublemaker who is unable to cope with authority as he is forced to join the academy to avoid jail time as he eventually decides to be a cop despite the bullying tactics of Harris, Blankes, and Copeland.

This is a really fun movie. I've always loved it. Too bad the franchise went straight downhill after this.

While I do think it's the best film of the franchise. I do like the five other films in the series. The last one wasn't very good though.

I used to watch these Police Academy movies w/ my brothers. It's such a hoot!! G.W. Bailey is the most hilarious one of the bunch, but everyone's really funny here.

@ruth-I grew up on the entire series as I have no shame in the fact that I enjoy them (except for the 7th one). I love G.W. Bailey as Captain Harris, he is such a funny antagonist.