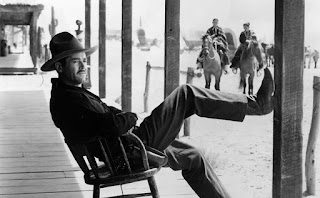 Based on the novel Wyatt Earp: Frontier Marshal by Stuart N. Lake, My Darling Clementine is the story of the O.K. Corral shoot-out where Wyatt Earp and Doc Holliday go up against the infamous Clanton Gang. Directed by John Ford and screenplay by Samuel G. Engel and Winston Miller from a story by Sam Hellman, the film is an exploration into the code of the West as a man tries to maintain law and order in the unruly world as well as deal with a group of criminals. Starring Henry Fonda, Victor Mature, Linda Darnell, Cathy Downs, Tim Holt, Ward Bond, John Ireland, and Walter Brennan. My Darling Clementine is a rich yet engrossing film from John Ford.

Set in 1882 in Tombstone, New Mexico, the film plays into the legendary OK Corral shootout between the Clanton Gang and the town’s marshal Wyatt Earp (Henry Fonda) and Doc Holliday (Victor Mature). A shootout that is considered one of the most legendary tales of the American West. Yet, the film is a dramatic account of what happened where it begins with Wyatt Earp and his brothers that include Virgil (Tim Holt), Morgan (Ward Bond), and James (Don Garner) driving cattle to California where they stop at the town of Tombstone. Things get complicated when Wyatt finds James killed along with their cattle stolen prompting Wyatt to become the town’s new marshal as he held the job at another town while dealing with the Clayton Gang led by its father (Walter Brennan).

The film’s screenplay by Samuel G. Engel and Winston Miller doesn’t rely entirely on historical facts as the actual showdown happened a year earlier. Instead, it’s about a man trying to do what is right in a world that is unruly as he only stopped by to get supplies and a shave where he is the only person that doesn’t just stand up to the Clayton Gang but also keep things in order. Even as he would get the aid of the town’s doctor/gunslinger Doc Holliday whom he would befriend but also have a friendly dispute with. Still, the two would together to deal with the brutish presence of the Clayton Gang who would often have things their way but Earp knows that he can’t stop them unless he has evidence to take them down. At the same time, Holliday deals with a former flame, whom Earp is smitten by, as well as the advances of a saloon singer as it plays into the different world of women who are trying to live their lives where men are often the dominant species in the West.

John Ford’s direction is very entrancing for the way he presents the world of the West in its sense of beauty but also with a sense of terror. Shot on location in Monument Valley, the film does play into a world that feels like a period in time where the West is still in its infancy as towns are popping up and people are trying to live decent lives. Yet, there is also the sense of unruliness as a lot of the cowboys go to saloons to drink and gamble while wondering if someone crazy will disrupt their sense of peace. The direction has Ford bring a lot of attention to detail in not just the landscapes but also in his approach to framing in the way he would put an actor into a frame whether it’s in a wide or medium shot. It adds to the sense of how vast the world of the West is and why it has this balance of rules and no rules which is quite exciting in some respects. The direction also has Ford create some unique compositions in the way he presents his actors in not just the use of close-ups but also in how they interact with one another.

Most notably scenes involving Earp and Holliday sharing a drink as they try to understand each other as well as the tension between the saloon singer Chihuahua (Linda Darnell) and Holliday’s old flame Clementine Carter (Cathy Downs) at a saloon where Chihuahua is sneering at her with Carter not doing anything. Ford’s presentation of the drama is simple he adds a sense of intensity into the action and shootouts including the climatic showdown at the OK Corral. It’s a moment where it’s not about the violence but rather strategy and to see if Earp can convince the Clayton Gang’s leader to surrender and serve time or suffer the consequences as the results are very riveting as it plays to the idea of justice in the West. Overall, Ford creates a sensational and compelling film about a man trying to do what is right in the unruly world of the American West.

Cinematographer Joseph MacDonald does incredible work with the film‘s black-and-white cinematography to play into the look of the West and its many locations along with some unique lighting for the scenes set at night as it is one of the film‘s major highlights. Editor Dorothy Spencer does excellent work with the editing as it is very straightforward with some unique rhythmic cuts for some of the film‘s dramatic and suspenseful moments. Art directors James Basevi and Lyle Wheeler, with set decorator Thomas Little, do amazing work with the look of the saloons and buildings in the town of Tombstone as it plays into the world of the West as well as the church that is being built during that time.

The costumes by Rene Hubert are fantastic for the look of the clothes the men wear as well as the dresses that the women wore in those times. The sound work of Eugene Grossman and Roger Heman is superb for not just in the sound effects but also in how things sound on location and in the scenes at the saloons. The film’s music by Cyril Mockridge, with music direction by Alfred Newman, is brilliant for its bombastic orchestral score as well as traditional music of the times provided by Newman as it includes some of the songs that were made during those times.

The film’s cast is great as it features some notable small roles from J. Farrell MacDonald as the bartender Mac, Jane Darwell as a kind restaurant owner Kate Nelson, Roy Roberts as Tombstone’s mayor, and Alan Mowbray as a visiting stage actor who arrives to entertain the locals only to be harassed by the Clayton Gang. John Ireland and Grant Withers are terrific in their respective roles as two of the Clayton brothers in Billy and Ike while Don Garner is noteworthy as the youngest Earp brother James who is killed early in the film. Tim Holt and Ward Bond are fantastic in their respective roles as the elder Earp brothers in Virgil and Morgan who aid Wyatt in keeping Tombstone safe. Walter Brennan is excellent as the Clayton patriarch Newnan Haynes Clayton as the head of a gang leader who makes sure that his boys do whatever it takes to rule the town as well as get whatever he wants at any cost.

Linda Darnell is wonderful as the saloon singer Chihuahua who is a lover of Holliday that is eager to be with him as she contends with Clementine’s presence as well as Earp’s sense of control. Cathy Downs is brilliant as Clementine Carter as a former flame of Holliday who comes to town to see him as she is greeted with kindness by Earp whom she befriends. Victor Mature is amazing as Doc Holliday as a skilled gunslinger/doctor with a serious illness to tuberculosis that sort of owns the town yet copes with feelings for Carter as well as Earp’s new sense of control as he would admire the man for sticking to his guns and do what is right. Finally, there’s Henry Fonda in a magnificent performance as Wyatt Earp as Fonda brings this very straightforward yet lively approach to the character as there is bits of humor in his performance but he’s all business as it’s one of Fonda’s finest performances.

My Darling Clementine is an outstanding film from John Ford that features an incredible performance from Henry Fonda as Wyatt Earp. Along with great supporting work from Victor Mature, Cathy Downs, Linda Darnell, and Walter Brennan. The film isn’t just a compelling film that explores the ways of the West but also a man trying to maintain a sense of law and order in a world that is out of balance. In the end, My Darling Clementine is a spectacular film from John Ford.

This is one of Ford's strongest works even if it does play fast and loose with the actual facts. The gunfight at the OK Corral has always been more about the mythos of the incident anyway so it doesn't hurt the film.

This is perhaps Victor Mature's strongest performance, he was frequently criticized during his heyday for being too laid back and non-emotive but now he often seems more natural than some of the more respected names of the time whose florid style seems mannered to present day eyes.

Fonda of course is great, this is the sort of role that suited his style perfectly and he seems very comfortable as Earp.

Of the two women I think Linda Darnell makes the stronger impression but I'm not entirely sure that that's Cathy Downs fault since Clementine is more of an ideal than a flesh and blood woman so Downs could only do so much with her.

Linda Darnell on the other hand makes a good fiery Chihuahua, for some reason Ford was against her casting feeling she wasn't right for the part despite the fact that she was Texas born and partially of Mexican heritage as well as being a top star at the time. I might be slightly prejudiced since she's a particular favorite of mine but I never quite understood that, all of that would seem to make her perfect and he was satisfied with her once the film was done.

All in all deserving of the praise given it, glad you were finally able to catch up with it and enjoyed the film so much.

I'm glad I saw it today. I've been needing to do more films by John Ford as I've done 3 films so far plus How the West was Won. He's kind of a blind spot for me as I'm a fan of westerns and I need to do more of his work. So far, The Searchers is my favorite film of his.

I guess because I'm not into Westerns, I have such a huge blindspot on John Ford. I remember seeing the trailer though, and the cinematography is quite stunning.

@Ruth-John Ford is a must for anyone that loves films. Plus, his westerns are essentially standard-bearers of what they should be along with the films that Sergio Leone and Sam Peckinpah would do in the years to come.

I'm not sure if I've seen this, or not. If I have, I was very young. Time to check it out, officially.

@Wendell-It's a film that I had been needing to see as I'm now glad I did. Especially as I have the Criterion DVD that features the theatrical cut and an extended preview cut that I hope to see later this year.

The title song is great, and good performances. It starts off well, Henry Fonda riding into town, but after that, the story didn't grab me. The villain lacked personality.
1993's Tombstone (about the same characters) was more entertaining.

@Chris-I'm sure Tombstone is more entertaining but I was still fascinated by the film as I knew it wasn't going to be an accurate depiction of what happened. Yet, it is still a great western.