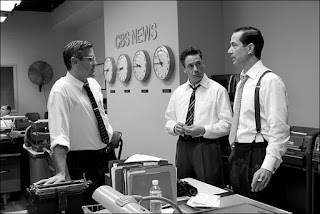 Directed by George Clooney and written by Clooney and Grant Heslov, Good Night, and Good Luck is the story of TV broadcast journalist Edward R. Murrow and his conflict to call out Senator Joseph McCarthy in the early 1950s during the period of McCarthyism where people are accused of being affiliated with communism. The film is a historical look into a man who refused to give in to McCarthy’s accusations amidst the pressure of corporate sponsors and such during the early years of television. Starring David Strathairn, George Clooney, Robert Downey Jr., Patricia Clarkson, Jeff Daniels, and Frank Langella. Good Night, and Good Luck is a fascinating yet rich film from George Clooney.

In the early 1950s where Senator Joseph McCarthy calls out on American citizens with Communist ties believing they’re working for the Soviet Union. The film revolves around Edward R. Murrow (David Strathairn) and his team to stand up to McCarthy and his many accusations believing that he is calling out regular people and making them cower to his claims. It’s a film that plays into a period in time during the early years of television where Murrow wants to voice his opinions at great risk from losing corporate sponsors. It is a film where people are scared and have no idea who to turn to during this time where Murrow would be a voice for those who are afraid of McCarthy.

The film’s screenplay by George Clooney and Grant Heslov opens and ends with Murrow at a gala in his honor in 1958 with colleagues there to praise him as he talks about the importance of what television should do rather than just entertain. Even as much of the film takes place from late 1953 to early 1954 where there’s a lot of discussion of the stories that Murrow and his producer Fred W. Friendly (George Clooney) want to talk about as it relates to those who lost their jobs because of McCarthy’s accusations or those who are victimized by McCarthy such as Annie Lee Moss. Though Murrow, Friendly, and some of their staff believe they’re doing something right to call out McCarthy for his actions. They still had to contend with their bosses who are worried about losing their corporate sponsors and the fact that they could be shut down by those sponsors or the powers that be.

Clooney’s direction is very simple yet stylish in not just the way he frames some of the things that goes on inside a television studio. It’s also in how he manages to capture the sense of energy that goes on whenever a story is about to be told through Murrow’s mouth. Using a lot of tracking and steadicam shots to capture some of the movement that goes inside the studios, Clooney would also take great stock in getting close-ups and medium shots to play into the conversations that happens along with very entrancing shots of Murrow talking to the camera. There’s also a few wide shots in the film as Clooney is more focused on maintaining a sense of intimacy of what goes inside a newsroom during the early 1950s in the era of McCarthy. Notably as it also plays into the power of what television could do and how it would affect all sorts of change despite some of the behind-the-scenes politics that goes on which would change everything all because of greed. Overall, Clooney creates a very engaging yet provocative film about a journalist standing up to Joseph McCarthy.

Cinematographer Robert Elswit does incredible work with the film‘s black-and-white photography that is a major highlight of the film with its approach to lighting for many of its interior scenes as well as the scenes set at night. Editor Stephen Mirrone does excellent work with the editing where it is very stylized with some simplistic yet methodical cuts along with some inspired usage of stock footage from the McCarthy hearings. Production designer James D. Bissell, with set decorator Jan Pascale and art director Christa Munro, does amazing work with the set pieces from the look of the offices and the control room as well as the studio where Murrow does his broadcast.

Costume designer Louise Frogley does nice work with the costumes that plays into the period of the times in what the women wore as well as the clothes the men wore. Sound editors Aaron Glascock and Curt Schulkey do fantastic work with the sound to play into the atmosphere of the newsroom as well as some of the audio heard in the news clippings and such. The film’s music by Jim Papoulis is superb for its jazz-based score while music supervisor Alan Sviridoff would play into that period with a lot of jazz music as it’s sung on location or in post-production by Dianne Reeves.

The casting by Ellen Chenoweth is great as it features notable small roles from Rose Abdoo as news editor Mili Lerner, Matt Ross as editor Eddie Scott, Reed Diamond as editor John Aaron, Alex Borstein as the secretary Natalie, Tate Donovan as editor Jesse Zousmer, Thomas McCarthy as editor Palmer Williams, and Grant Heslov as the news director Don Hewitt. Ray Wise is terrific as news journalist Don Hollenbeck as a reporter for CBS who finds himself being targeted by the government as a Communist as he starts to unravel. Robert Downey Jr. and Patricia Clarkson are brilliant in their respective roles as correspondent Joseph Wershba and wife/editor Shirley Wershba as two co-workers trying to keep their marriage a secret as it was forbidden for co-workers to be married in those times.

Jeff Daniels is excellent as CBS news director Sig Mickelson as a man who is trying to warn Friendly and Murrow about what not to say as he is struggling to keep their sponsors as well as reveal what things have to be done in the office. Frank Langella is amazing as CBS chief executive William Paley as the head of the company who knows what Murrow and Friendly are doing but warns them about what they will lose. George Clooney is superb as producer Fred W. Friendly as a friend of Murrow who tries to figure out what to cover and how to help Murrow out with the news as well as see what kind of trouble they would get into. Finally, there’s David Strathairn in a phenomenal performance as Edward R. Murrow as a no-holds barred journalist who decides to spar with Joseph McCarthy over his accusations on people who claim to have ties with Communism in an attempt to do what he feels is right as well as see television as a way to help people instead of other things as it‘s Strathairn in one of his greatest performances ever.

Good Night, and Good Luck is a remarkable film from George Clooney that features a towering performance from David Strathairn as Edward R. Murrow. The film isn’t just a look into a period of time when the world of journalism stood up to Joseph McCarthy and his witch hunt. It’s also a film that showcases the world of news on television in its infancy where it was not afraid to speak the truth despite pressures from corporate sponsors. In the end, Good Night, and Good Luck is a spectacular film from George Clooney.

George Clooney Films: Confessions of a Dangerous Mind - (Leatherheads) - The Ides of March - The Monuments Men

I really enjoyed this one. David Strathairn is just so perfect in this role. And that cinematography is outstanding. It's one of my favorites from that year.

It's in my top 15 of 2005 so far as I think it's Clooney's best work as a filmmaker. Plus, having the balls to have Strathairn in the role of Murrow with Clooney doing supporting work. That is someone who isn't afraid to do the smaller things. I hope Clooney's next film as a director is something simpler and has him not be in front of the camera but rather behind.

Oh, thanks for reminding me to watch this one. I can't believe I still haven't seen it yet but the story intrigues me and I like David Strathairn who's an underrated actor. I'm glad he's the lead instead of Clooney. I take it this one is eons better than Monuments Men which is also written by Clooney/Heslov?

@ruth-Oh, way better than The Monuments Men and I think this is Clooney's best work as a director.