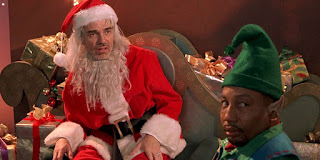 Directed by Terry Zwigoff and written by Glenn Ficarra and John Requa, Bad Santa is the story of an alcoholic thief who dresses up as Santa Claus where he and his partner hope to rob a mall where he copes with his own self-loathing but also help a young kid. The film is a dark comedy where a man dressed up as Santa Claus tries to find reasons for living though he still feels like he is at odds with the world as the titular character is played by Billy Bob Thornton. Also starring Lauren Graham, Brett Kelly, Tony Cox, Lauren Tom, Bernie Mac, Cloris Leachman, and John Ritter in his final film performance as Bob Chipeska. Bad Santa is an offbeat yet exhilarating film from Terry Zwigoff.

The film revolves around a pathetic, self-loathing alcoholic who works in malls dressed up as Santa Claus as part of an act where he and his midget-partner plan to steal money from malls during the holidays until the man meets a bullied young boy and finds himself caring for him. It’s a film that is sort of an anti-Christmas film in some ways yet it is really about this man that realizes that there is good in the world and doesn’t have to go into this world of self-destruction and self-loathing while can still be perverse such as his liaisons with a bartender who has a fetish for men in Santa’s clothing. It all plays into a world that is quite odd as this man named Willie T. Soke is just someone that is quite amoral as he spends his time in smalls having sex with whoever he sees, gets drunk, or does all sorts of things much to the annoyance of his partner Marcus (Tony Cox).

The film’s script by Glenn Ficarra and John Requa, with re-writes by the film’s executive producers in Joel & Ethan Coen, doesn’t just explore Soke’s own disdain towards society and himself but also in the fact that he unknowingly finds himself being intrigued by this young boy who not only sees him as the real Santa but also someone he believes is actually good despite the awful shit he does. While Soke is seen early in the film being a skilled safecracker, it is clear that his attempts to be part of society fails because of his anti-social behavior which is fueled more by his alcoholism. Even as he ponders about his own purpose in life until he meets this kid where he realizes that he does have a reason to live. Still, he and Marcus have to do the job to steal things but they realize that a security officer named Gin (Bernie Mac) knows what is going on as he wants in on the action which only make things worse. Especially when Willie begins to have a change of heart as he realizes not just the true meaning of Christmas but also in doing what is right.

Terry Zwigoff’s direction is largely straightforward in terms of the compositions he creates but also finds way to create moments that are very funny. While some of the comedic moments were helmed by an unknown filmmaker for its theatrical release, there are moments that is still Zwigoff’s film in the way he presents Soke as this pathetic, unruly man that is often obsessed with sleeping with women or just getting shit-faced. Shot largely on location in Los Angeles and parts of Southern California, the film does play into a world where it is warm in an odd way considering that it is set during the Xmas holidays. The usage of wide and medium shots do play into the look of the malls and some of the locations in California as Arizona. Yet, Zwigoff finds way to convey that sense of dark humor where it can toe the line over what is profane but also what is funny. Even in scenes that play into moments that are quite natural as well as showcase that Soke can be redeemed such as a scene where he beats up a bully and feeling very good afterwards. The climatic heist is filled with tension but also a bit of unexpected sentimentality as it relates to Soke’s own revelations about himself and doing what is right as it would end in a very funny way. Overall, Zwigoff creates a bawdy yet whimsical film about a self-loathing thief finding some meaning during the Xmas holidays.

Cinematographer Jamie Anderson does excellent work with the film‘s cinematography to play into the colorful look of the locations in the day to the usage of lights for many of the interior scenes set at night. Editor Robert Hoffman does nice work with the editing as it is largely straightforward with some rhythmic cuts for some of the film‘s very funny moments. Production designer Sharon Seymour, with set decorator Robert Greenfield and art director Peter Borck, does fantastic work to the look of the mall as well as the home of the kid that Stokes befriends.

Costume designer Wendy Chuck does wonderful work with the costumes in creating some stylish costumes from the ragged look of Soke’s Santa suit to the clothes that Marcus wears as an elf. Sound editors Michael J. Benavente and Larry Kemp do terrific work with the sound from the way liquor bottles and such sound in the background along with the atmosphere of the malls. The film’s music by David Kitay is amazing for its mixture of piano-based music as well as playful orchestral touches while music supervisor Rachel Levy creates a fun soundtrack featuring a variety of Xmas standards along with some classical pieces to play into the film’s humor.

The casting by Felicia Fasano and Mary Vernieu do incredible work with the casting as it features some notable small roles from Ethan Phillips as the boy’s incarcerated father, Tom McGowan as the original mall Santa Claus who quits early in the film, Ajay Naidu as some nut job who attacks Soke over a misunderstanding, Alex Borstein as a mom from a different mall, Octavia Spencer as a prostitute Stokes know in Cleo, Matt Walsh as a neighbor who asks Soke about putting some decorations for the neighborhood, Max Van Ville as the kid’s bully, and Cloris Leachman in a very funny performance as the kid’s senile yet funny grandmother. Lauren Tom is wonderful as Marcus’ mail-order bride Lois who only cares for idiotic things.

Bernie Mac is fantastic as the mall security chief Gin Slagel as a man that is suspicious about Soke and Marcus only wanting half of what they steal in a bargain that makes Soke very uncomfortable. In his final film performance, John Ritter is excellent as the mall’s manager Bob Chipeska as a man that is trying to make sure things go smoothly as he is taken aback by Soke’s behavior as well as Marcus’ own appearance as it’s a very funny performance from Ritter. Lauren Graham is amazing as Sue as a bartender Soke befriends and goes out with as she has a fetish for guys in Santa suits while being a maternal figure for this young kid.

Brett Kelly is brilliant as this young kid named Thurman as someone that is constantly bullied while being fascinated by Soke as he sees someone that he can rely on. Tony Cox is great as Marcus as a midget with a fierce tongue as he is sort of the mastermind behind the thefts as he copes with Stokes’ growing incompetence and troubles where he finds himself doing a lot of the work. Finally, there’s Billy Bob Thornton in a phenomenal role as Willie T. Soke aka Bad Santa as this skilled but unhappy thief who drowns himself in self-loathing and alcohol as Thornton provides something that is very funny in its restraint and indifference but also some moments that are very somber as it relates to his yearning to find meaning in his life.

Bad Santa is a sensational film from Terry Zwigoff that features a winning and hilarious performance from Billy Bob Thornton in the leading role. Along with a great supporting cast and a witty premise, the film isn’t just an odd yet exhilarating dark comedy that is kind of the anti-Christmas film. It’s also a film that explores a man’s disdain towards society and helping this young kid stand out and not take shit from them. In the end, Bad Santa is an extraordinary film from Terry Zwigoff.

I love this movie. It's one of my all-time fave Christmas flicks. Thornton was absolutely fantastic. He just owned the movie. Like you say, though, lots others were excellent, too. I had no idea that someone else filmed some of the scenes. It all fits together seamlessly so I never suspected as much.

@Wendell-As I was doing research on the film for my upcoming Auteurs piece on Terry Zwigoff. I did learn that he didn't have final cut on the film which explained why there was a director's cut release on DVD. I'm not sure who did some of the additional direction (rumor was that it was the guy who did The Hangover) as it doesn't surprise me entirely as the film was released by Miramax under the leadership of the Weinsteins and we all know what they do to a lot of people's films.