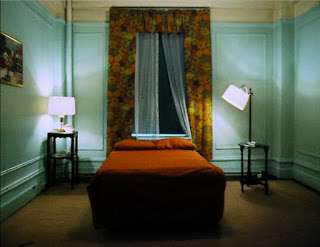 Directed by Chantal Akerman, Hotel Monterey is a documentary film of sorts that has Akerman taking a look at the famed Hotel Monterey in New York City. The film is a mixture of documentary and experimental filmmaking that explores the many rooms, lobbies, and such inside this cheap yet intoxicating hotel. The result is a fascinating yet rapturous film from Chantal Akerman.

Set in a section of New York City that is near the river and at this hotel (that is now a Days Inn), the film is about the look of a hotel and its many occupants, rooms, corridors, and other aspects in the hotel. Shot with no sound, the film is largely a silent documentary where it spends a few minutes gazing into its lobby and then spend some time inside the elevator. For much of the film, the camera rarely moves where Chantal Akerman takes great time to create simple shots from the way she positions the camera inside the hotel’s corridors or in a wide shot of the rooms from inside that include a few of its occupants. It’s a film that showcases something that could be very ordinary in any manner but has something that is very extraordinary.

With the aid of cinematographer Babbette Mangolte, Akerman maintains something that is naturalistic in its imagery while shooting the film on a grainy film stock to make it feel real with whatever kind of lighting that was available. The film is broken down into sections where editor Genevieve Luciano would provide a few abrupt jump-cuts for each of these transitions including some key moments where Akerman would put the camera on a wide shot for six minutes in a corridor while an elevator would open in real time. Then it would cut to a close-up of the elevator buttons where it adds something that is unique. The scenes of the corridor where the camera would finally move as it goes into a tracking shot towards a window display what they would look like in day and night. What Akerman would do is create something where it is about simplicity but also showcase that there is magic to something that can be seen as ordinary by many.

Hotel Monterey is a phenomenal film from Chantal Akerman. It’s a film that showcases life in a cheap, remote New York City hotel from the view of a foreigner where it is quite daring but also engaging for the way it is told with such simplicity. Especially as it takes a look into this obscure and remote hotel in a city that was quite adventurous back then. In the end, Hotel Monterey is an exquisite film from Chantal Akerman.

I think my heart broke a bit when you called it a Days Inn now.

It looked part of New York that was cool and interesting. Some said NYC in the 1970s, especially in the mid-70s, was like the Wild Wild West. I was fortunate to see a bit of that seediness more than 20 years ago in my first trip (so far) to the city where I even got a glimpse of CBGB's and all of those record stores. Now that city is just a fuckin' bore.

Yeah, I was trying to see if that hotel still existed after seeing the film and when I read what is now... that hurt. It's probably not that interesting to look at. When something was extraordinary and was its own thing then becomes ordinary. That's when things go wrong.