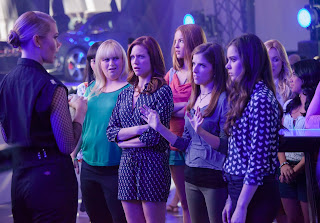 Directed by Elizabeth Banks and written by Kay Cannon, Pitch Perfect 2 is the sequel to the 2012 film where a group of female a capella singers try to enter a global a capella competition in the hopes to save their sorority following a national scandal. The film is another tale about a group of young women who find themselves in a new world as some try to cope with life after college along with the fact they’re being scrutinized over something that was an accident. Starring Anna Kendrick, Brittany Snow, Rebel Wilson, Hailee Steinfeld, Alexis Knapp, Hana Mae Lee, Skylar Astin, Ester Dean, Anna Camp, Adam Devine, Ben Platt, John Michael Higgins, Katey Sagal, Flula Borg, Brigitte Hjort Sorenson, and Elizabeth Banks. Pitch Perfect 2 is a delightful and witty comedy from Elizabeth Banks.

Set three years after the events of the first films, the Barden Bellas become a national treasure in the world of a capella singing until a concert in front of the American president becomes a scandal where the group is faced with suspension and not being able to perform or bring in new members. This sets the course for what happens in this film where they find a loophole that would allow them to compete in a global a capella singing competition though their chances of winning is very long. Along the way, the group takes in a new member whose mother was a Bella while the group’s co-leader in Becca (Anna Kendrick) becomes an intern for an egocentric music producer. It’s a film that isn’t just about these ladies wanting to redeem themselves but also face with the prospects of growing up and dealing with life after college as it’s something Bella co-leader Chloe (Brittany Snow) isn’t ready to cope with as she had purposely flunked classes to remain a Bella.

Kay Cannon’s script doesn’t just play into the growing conflicts and struggles the group face from within but also in the fact that they’re considered pariahs over the scandal caused by Fat Amy (Rebel Wilson) when she accidentally exposes herself in front of President Obama during a birthday concert. Adding to their struggle is the fact that they’re being replaced by a super-German a capella group known as Das Sound Machine who provide a lot of things that overwhelm the Bellas in their attempt to redeem themselves. While Cannon provides some funny one-liners and some structure to the story, the story does feel a bit familiar but it has some unique subplots such as the group taking in freshman Emily Junk (Hailee Steinfeld) who is a legacy as she wants to write songs. Another subplot involves Fat Amy’s own attraction towards former Treblemaker leader Bumper (Adam Devine) who is now the university’s security chief.

Elizabeth Banks’ direction is quite straightforward in terms of the compositions that are created while maintaining that lively sense of humor that made the first film so special in the first place. Though much of what happens is quite conventional, Banks does make sure many of the moments of the film are engaging while having that sense of feeling improvised to make it feel more natural. Banks’ usage of medium shots and close-ups help maintain that sense of intimacy as well as the importance of sisterhood among the young women while using a few wide shots for some of the performances including an attempted comeback performance in the second act where the Bellas try too hard to outdo the Das Sound Machine. Shot largely in Louisiana State University in Baton Rouge, Louisiana, the film doesn’t just play into something that is vibrant as well as modern while using some of its older streets for the film’s climatic showdown at Copenhagen. Even as Banks knows that the film’s heart is in the music and singing a capella where it manages to do a lot in its performance and a whole lot more. Overall, Banks creates a fun and exhilarating film about a group of young ladies trying to win back their respect in an a capella competition.

Cinematographer Jim Denault does excellent work with the film‘s cinematography with its naturalistic yet colorful look for many of the daytime scenes set at the college campuses to the usage of lights for some of the musical performances and scenes set at night. Editor Craig Alpert does nice work with the editing as a lot of it is straightforward with some stylish usages of jump-cuts and montages for some of the livelier moments of the film including musical performances. Production designer Toby Corbett, with set decorator Monique Champagne and art director Nate Jones, does fantastic work with the look of the Bellas‘ house as well as the studio Becca would intern at along with the retreat camp the girls would go following a humiliating performance. Costume designer Salvador Perez Jr. does wonderful work with the clothes from the casual yet stylish look of the clothes to the array of stylish costumes the Bellas would wear as well as the clothes of Das Sound Machine.

Key hairstylist Meagan Herrera and key makeup artist Judy Yonemoto do terrific work with the look of the characters in the way they would present themselves during a musical performance. Visual effects supervisor Steve Parish does superb work with some of the film‘s visual effects as much of it is set dressing for the scenes set in Copenhagen. Sound editor Erin Oakely and sound designer Jack Whittaker do amazing work with the sound in capturing the naturalistic sound of a capella singing in all of its layers as well as the raucous sounds of the crowds and parties. The film’s music by Mark Mothersbaugh is brilliant for its mixture of electronics, dance and orchestral music as well as providing that same mix for the sound of a capella music while music supervisors Sarah Webster and Angela Leus would create a soundtrack filled with contemporary pop tunes and hip-hop into some of the songs as well as what is playing in the background.

The casting by Kerry Barden and Paul Schnee is incredible as it features appearances from Clay Matthews, David Bakhtiari, Don Barclay, Josh Sitton, and T.J. Lang as real-life players of the Green Bay Packers who do sing a capella, David Cross as a riff-off host, Keegan-Michael Key as a music producer Becca is interning for, Shawn Carter Peterson as the producer’s hipster yet dim-witted nephew, Snoop Dogg as himself, and as members of the Tone Hangers group, Reggie Watts, Joe Lo Truglio, Jason Jones, and John Hodgman. Other notable small roles include Kelly Jakle and Shelley Regner in their respective roles as senior Bellas Jessica and Ashley, Birgitte Hjort Sorensen and Flula Borg as leaders of Das Sound Machine, Ben Platt as Treblemakers co-leader Benji who has a crush on Emily, Skylar Astin as Treblemakers co-leader/Becca’s boyfriend Jesse, Anna Camp as former Bellas leader Aubrey who runs a retreat camp as she would help the team get back up, and Katey Sagal as Emily’s mother Katherine who is considered a legend among the Bellas. Hana Mae Lee is a total delight as the very quiet yet creepy Lilly who is the group’s beat-boxer as she always says some very funny things.

Ester Dean is excellent as the soulful lesbian Cynthia with top-notch rhyming skills while Alexis Knapp is wonderful as sensual Stacie who often uses her sex appeal to get ahead. Adam DeVine is hilarious as the former Treblemakers leader Bumper as the college’s new security chief that is trying to get himself back into the world of singing. Chrissie Fit is fantastic as the Guatemalan exchange student who joined the Bellas a year after the events of the first films as she provides some very funny comments about everything that is foreign to her. Hailee Steinfeld is amazing as Emily Junk as a freshman who is accepted by the Bellas because of her mother as she copes with her new surroundings as well as wanting to create original songs. Elizabeth Banks and John Michael Higgins are incredible in their respective roles as a capella broadcasters Gail Abernathy-McKadden-Feinberger and John Smith as they provide some funny commentary with the latter being very misogynistic.

Brittany Snow is brilliant as Chloe as a super-senior Bella who is obsessed with trying to win as it is really a cover for the fact that she’s not ready to leave college and the Bellas while being very funny. Rebel Wilson is phenomenal as Fat Amy as the Australian in the group whose accidental actions has given the Bellas a lot of trouble as she tries to set things right while dealing with her own feelings for Bumper. Finally, there’s Anna Kendrick in a remarkable role as Becca as the group’s co-leader who is trying to help the Bellas redeem themselves from scandal but also deal with her own future where she learns what it really takes to become a record producer where she finds inspiration and help from a Bella.

I can't go with you on this one. It felt like a shameless remake of the first, but not nearly as good. And I wasn't in love with the first one. This one hits all the same beats, bad pun intended, and tells the exact same story almost the exact same way. They just replaced the Trebelmakers with Das Sound Machine. The only thing I really liked was the development of the relationship between Fat Amy and Bumper. Otherwise, it's the same movie.

It is sort of the same film like the first one but I had fun watching this. I know it's not as good as the first but it was pretty funny. My mom though had a kick in seeing Fat Amy sing "We Belong". Sometimes, I just go in not really trying to overthink things and let myself soak in the silliness. I'm not going to say it is what it is. That is just a poor excuse. Plus, anything with Lilly is a goldmine as I love that little adorable Asian.

I haven't seen the first Pitch Perfect but I'm curious about this one as I like Elizabeth Banks. That's good that she has a knack for directing as well and I find Rebel Wilson hilarious. I should give this a rent soon.

@ruth-It's been HBO lately as I ended up watching it as I liked the first film a lot. Plus, this is just very entertaining and fun to watch whether you've seen the first film or not.